Earlier this week ZeroBlog30 got a message from someone aboard the USS George Washington, a Navy ship that's been docked under repair in Newport News, VA since 2017. The situation was bleak: 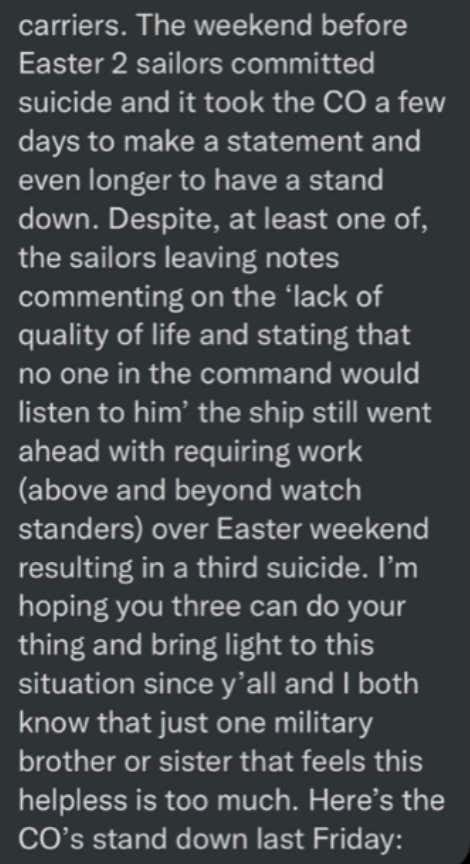 To back up what this person is saying, according to Task & Purpose:

The crew of the aircraft carrier USS George Washington is going through an awful time. At least seven sailors from the ship have died in the past year including one confirmed suicide and three other possible suicide deaths that are under investigation, a Navy official said. The total number of crew members who have died in the past 10 months could be as high as ten…

In the wake of those tragedies & spiraling morale, the highest enlisted sailor, Master Chief Petty Officer of the Navy Russell Smith, came to speak with those assigned to the ship. Was his message, "I hear you, I see you, we're going to turn this around"???

It was more along the lines of, "Hey, things could always be worse for you, so suck it up because there's not much we can do."

At 25:07 on today's ZeroBlog30 we break down Smith's response to the sailors and how the mentality of, "It sucked for me so it should suck for thee…" can mess up readiness, personal retention, unit cohesion (all the fave buzzwords), and take people beyond the brink.

I guess it especially struck a chord with me because one of the main complaints on the USS GW was poor living conditions, and an account I follow has been highlighting recent cases troops have sent them from all branches actively living in areas like these:

I did not see this one coming:

And there are so many more than that.

When you're active duty you expect some level of shitty living, it just is what it is… But when it gets to a level that you dread going 'home' at the end of each day & your mental health suffers, where you are genuinely unsafe, where your command ignores or refuses to fix things until they get bad PR… It's not ok. That is an overwhelming failure of leadership all the way up the chain. There's nothing tough or badass about living in a room full of toxic mold or never having hot water, or being stuck in rooms that don't lock, and yet it's all too often the case…

1) If you used to be in the military and had garbage living conditions like this and your response is to say, "Whatever, they're being pussies, we had it even worse!" then booooo… Lead paint chips falling on your bed & asbestos in your walls aren't badges of honor. And yeah the military is inherently difficult in many ways, and austere/combat conditions are a different ballgame, but every day housing becoming a threat to your health is not what people sign up for.

2) If you're reading this while you sit in a barracks room with no heat or hot water, or in berthing with no electricity, or in a space where you are constantly battling mold, etc., reach out to the Armed Forces Housing Advocates. On top of that, if you're afraid of retribution & your command isn't fixing shit like this IMMEDIATELY, or getting you in new housing until they do, go grassroots & hit up the biggest military meme accounts you know & have them call it out anonymously for you.

The command, who has known about their troops living in squalor, acts absolutely STUNNED and makes a statement vowing to fix the issue (while yelling at the troops behind the scenes for going behind their backs, when in reality the troops had been begging their command for help for a long time) -->

The cycle begins again, no one learns anything, the officers still get their promotions, the enlisted get some weird cancer when they're 32.

Just type something like "bad living conditions + military base" into Google and you'll see that play out quite literally hundreds & hundreds of times over. At ZBT we heard from troops who told us after that Walter Reed story broke, they just shuffled them around to different barracks a bit and didn't really fix much of anything. Even worse is seeing what military families have had to live with, especially when they've got little kids.

It's just crazy to me that the past few years meme accounts have often been quite literally the only reason changes have happened, whether it's regarding housing or sexual assault or toxic leadership, etc. There's a ton of awesome commands out there, but in the bad ones the only thing that motivates higher ups to do right by the lower enlisted is fear of bad press effecting their careers. And when they get called out for it they only ever get a slap on the wrist.

I'm "old man yells at cloud"-ing I suppose, but these are the people serving our country, who are willing to defend us at a moment's notice, and at a rank level where their lives are most at risk (and they are well aware of that risk), and that's how they get treated…

It happens under every single administration whether it's right, left, whatever, and it's beyond fucked. If you're a politician who uses 'the troops' for clout or as pawns to push your agendas (pretty sure that's all of them), you should have your finger on the pulse of the living conditions they've got at bases in your district and furthermore !!!! Ok, ok, I'm done.

In closing, as I was finishing this blog the ZBT crew & I were texting each other about the DMs we've received following this episode. We heard from others on the USS GW saying it's even worse than the news stories have shared, and from others across the Navy like this person sharing that's not just that particular ship… I do not accept that nothing can be done for these troops & the public should be angry about this on their behalf, too: