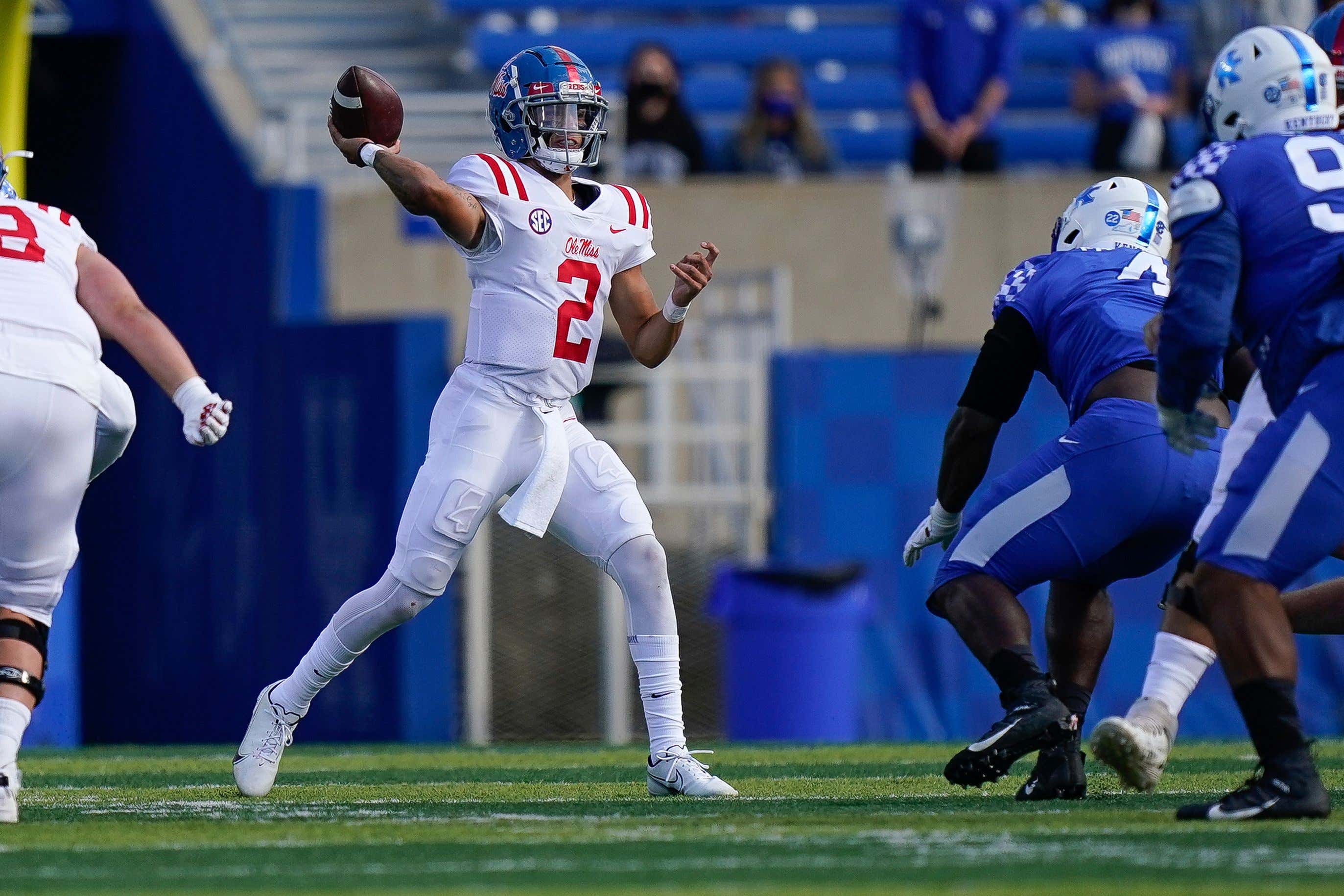 Matt Corral did the near impossible and led Ole Miss to a 10 win regular season for the first time in school history. And he led the NCAA in total offense in 2020. So why is Matt Corral falling down NFL Draft boards?

Rumors of him partying and a 15 on the Wonderlic test certainly have not helped. But NFL teams are making a huge mistake. This dude is tough as nails , a great leader and a dual threat. He has a big arm and improved his decision making a ton in 2021. He also learned from one of the top QB coaches in American in Lane Kiffin. And I repeat he won big at Ole Miss plus his TD pass to Elijah Moore to Kentucky in October 2020 got me hired at Barstool. What an American!

Corral's Over/Under is set at 39.5 on the Barstool Sportsbook projecting him as an early 2nd round pick tomorrow. That seems to be a new Ole Miss tradition as Rebel star WRs AJ Brown, DK Metcalf & Elijah Moore all fell to the 2nd round in recent years.

Let's take a look at likely landing spots for Matt.

There are A LOT of rumors floating around linking Corral to Washington. Although they traded for Carson Wentz this offseason, that hardly solves the long term QB situation. Wentz is injury prone and clearly rubbed people wrong in Indianapolis last season. Corral would not be asked to immediately start there. My only fear is that Washington screws everything up and that might not be an easy place for Corral to succeed.

Corral ate dinner at City Grocery in Oxford on the night of Ole Miss Pro Day with Mike Tomlin and Steelers brass. With Big Ben retiring, they certainly need a QB of the future. Mitch Trubisky was signed this offseason but cannot be viewed as more than a stop gap. I have also heard some stuff from Oxford that Mike Tomlin has been doing a ton of digging about Matt. I could see the Steelers trying to trade up for him if he falls to early 2nd round. If Pittsburgh goes QB at 20, I think it will be Malik Willis or Kenny Pickett the hometown hero.

GOD I DO NOT WANT THIS TO HAPPEN! I am going to support Corral no matter where he lands but hopefully it is not in the NFC South. I heard a wild story about Panthers HC Matt Rhule and Carolina staff drinking at City Grocery on the night of Ole Miss Pro Day and asking the bar manager a ton of questions about Corral. Clearly, they are interested and damn sure need a QB after Sam Darnold was horrendous last season. I hate to say it but I am seeing Corral to Carolina early in 2nd round as the most likely landing spot.

Seattle needs a QB badly after trading Russel Wilson for a bounty of picks from the Denver Broncos. And Pete Carroll goes way back with Lane Kiffin who was his OC at USC. Corral is also a West Coast guy. With Seattle in rebuilding mode, this makes a lot of sense. It would be fun for Ole Miss fans to see Corral chunking bombs to DK Metcalf.

But as all of you know, I am wrong all the time so what the hell do I know anyway?