I'm starting to get a pretty good feeling that this movie is going to be a ton of fun. Both Jurassic World movies are fairly forgettable even if they brought in some serous cash at the box office. In reality they don't come close to producing the magic that came with the original or even Lost World in my mind. With this being the final movie of the franchise (until someone decides money is awesome and they reboot the franchise in a decade) they need to go out with a bang here. That means bringing back Dr. Grant, Dr. Sadler, and Dr. Malcom to join the current cast. They're not here for cameos either, but are more or less stars in the movie.

At some point you do roll your eyes and wonder how many of these you can possibly make in terms of switching up the plot. Let's run through the premise of each movie real quick

Lost World: alright the park didn't work, let's bring them to the States

JW: Alright let's try the park idea again but actually bring in patrons because we definitely worked out all the issues. Oh we also created a new dinosaur that has 11 different species mixed into its DNA!

JW Fallen Kingdom: The island is exploding, let's make people think we're relocating the dinosaurs when we're actually auctioning them off to the black market

Well, Jurassic World: Dominion gives us a full movie of dinosaurs running amok throughout modern civilization. I need pedestrians getting devoured by these killing machines and causing all sorts of chaos. I loved the end of Lost World where the T-Rex is rampaging through the streets of San Diego. Now it looks like we're getting that on steroids.

Look at this idiot on his scooter, oblivious to everything around him.

Buddy there are terror machines all over town square, people dying left and right, and here you are scooting on by without a care in the world. He actually turns around at the roar seemingly stunned at what he's seeing. This is why when I walk around NYC I always have one headphone slightly off my ear so I can be aware of my surroundings. Never know when a dinosaur is gonna appear and try to eat you….or a naked homeless man try to beat you with a lead pipe.

Anyway this is a call back to Eddie's brutal death from the second movie? Chris Pratt being ripped apart by these two would be AWESOME.

Pratt thinking he can talk to every dinosaur in the world and be friends with them only to die a gruesome, bloody death would vault this movie to the top. The whole relationship he has with Blue is so stupid, I wish they went away from that instead of leaning on it.

The big bad villain in this one appears to be this Giganotosaurus. We've gone through the OG T-Rex, velociraptors, the Spinosaurus, the Indominous-Rex, and Indo-Raptor, to now the Giga. The director Colin Trevorrow compared this monster to the Joker in the sense it just wants to watch the world burn. That's a real life quote. 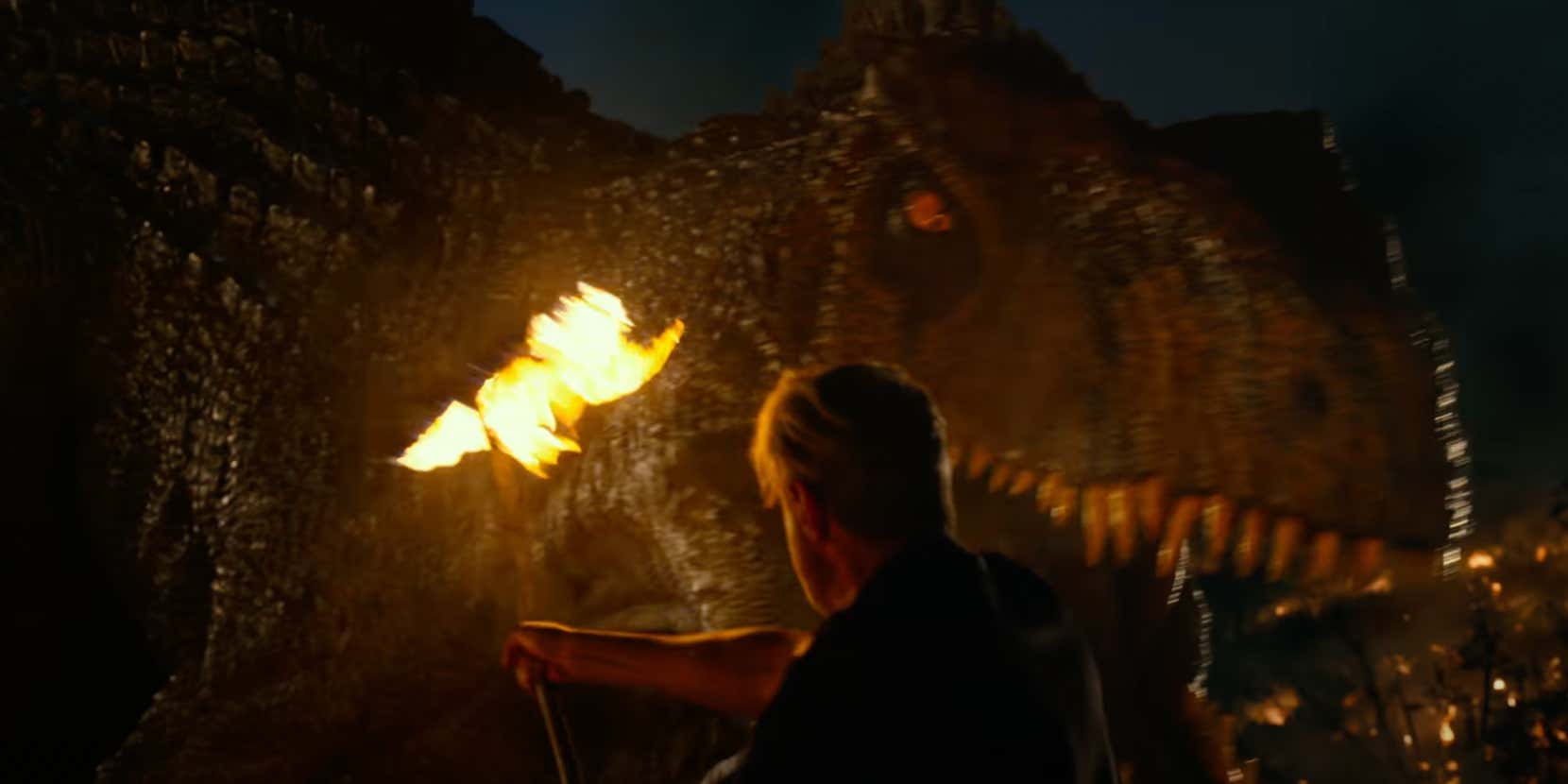 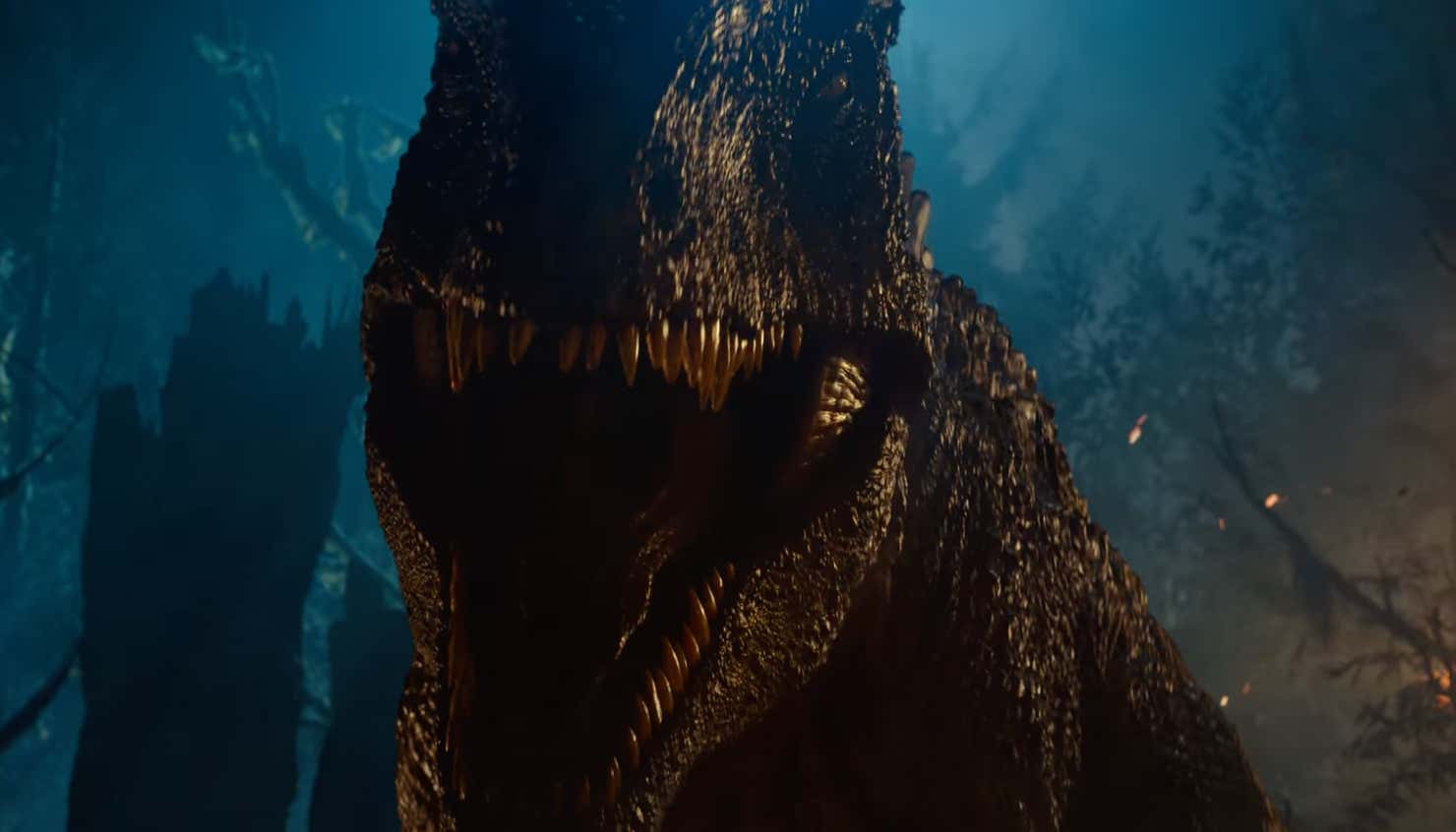 Sure? As silly as that quote is, I hope that means this motherfucker is going to kill a lot of people and be terrifying. That certainly plays.

This movie isn't going to win awards, but let's just hope it's a ton of fun. Give me some good nostalgia with the O.G. cast and give me chaos in the streets of the civilized world. Deal? Deal. See you June 10th.