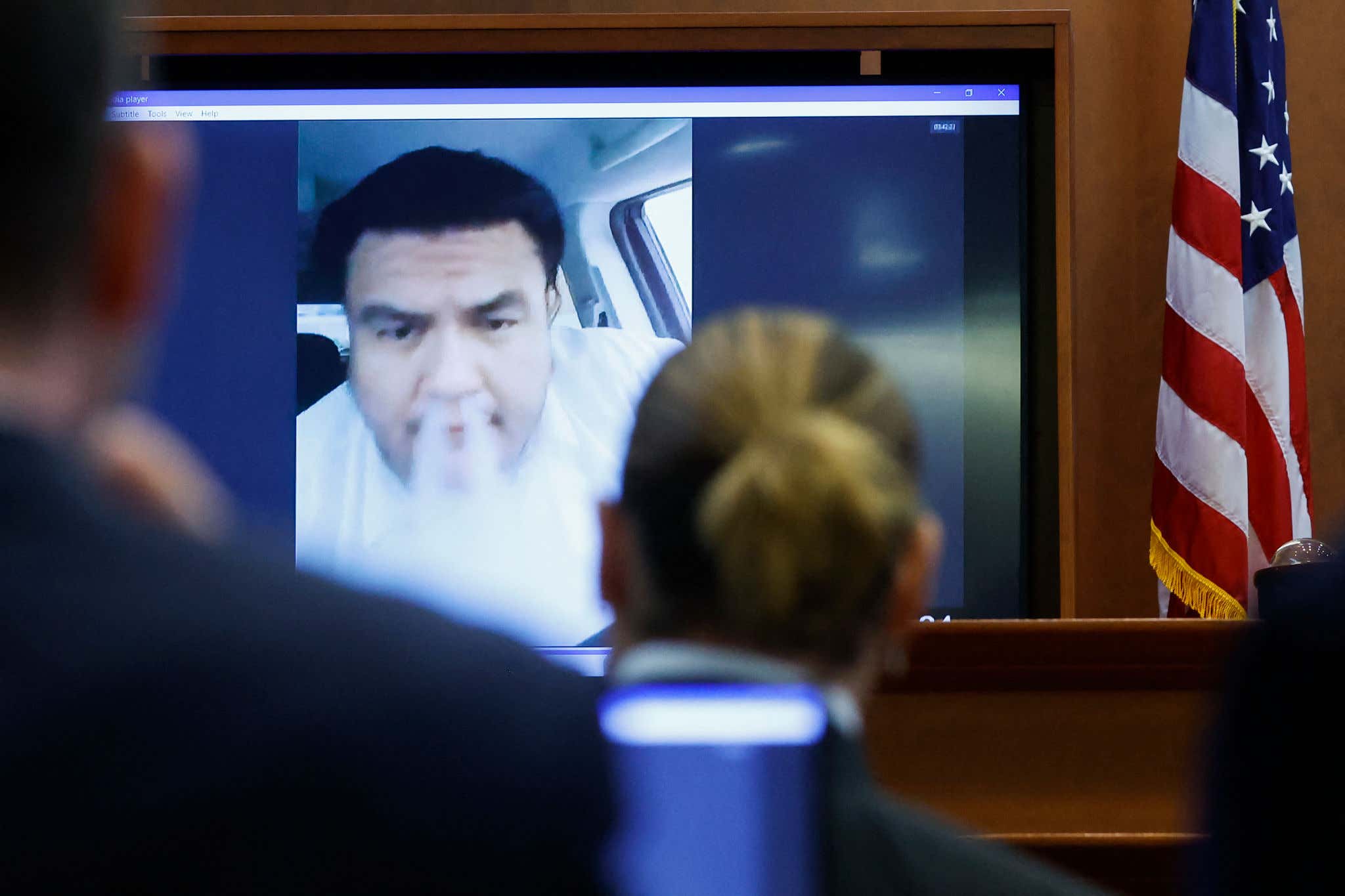 Meet Alejandro Romero, a front desk attendant at the Eastern Columbia Building that Johnny Depp once called home. He was asked to waste his time and testify in the ongoing Johnny Depp-Amber Heard trial. This trial is the gift that keeps on giving with the shit that's taken place so far, and Alejandro's testimony might take the cake.

Yesterday in court the lawyers aired his pre-recorded deposition that was conducted back in 2021. You'd think since this wasn't live that they'd be able to nail down a time when Alejandro wasn't too busy and could appropriately testify. Nope, you want Alejandro to answer some questions, well he's going to do it his way. When and where he wants to chat, you make it work. Naturally Alejandro gave his deposition in his car equipped with his vape pen. He was asked to review some documents they sent over. His response?

Romero spoke about seeing the former couple, who lived in the building's penthouse, and told lawyers, "I know you guys sent me the papers to review, and I'll be honest, I didn't want to review them because it's been so long." (People)

Papers? What papers? Ask him some questions and he'll see what he can do about it. The reading though is not happening whatsoever. Alejandro told a story how Heard and her friends thought someone was trying to break into their unit when in reality it was a dog.

My man just ripping his vape mid-testimony without a care in the world. Depp couldn't help but laugh. After seeing other footage it seemed like Heard managed to keep a straight face the whole time. Maybe she was a better actress than I originally thought?

The best part of this whole thing is they kept asking this front desk worker about what makeup Amber Heard was wearing on a random night. The relevance stems back to a night cops came to the building when she claims she was wearing makeup to cover up bruises caused by Depp. Naturally let's turn to make up expert/doorman Alejandro for the real answers.

This man works in HOSPITALITY and was questioned about whether she was wearing concealer, foundation, any blush, powder, and what shade of powder/concealer/foundation she normally uses. This guy…

Incredible. I feel like you could be married to the same woman for 40 years and still have no idea what kind of makeup, concealer, blush they use, never mind the shade. I'm going to be completely honest with you. I don't even know the difference between foundation and concealer. You hand me both and put my life on the line to accurately pick the right one I'm giving you a complete 50/50 guess.

Here's the full two minutes of him getting pissed off with the stupid questions, taking a few rips of his vape, and driving away without a seatbelt on. No fucks given.

Alejandro was not there for the bullshit and with that he's the highlight of the trial so far. Even the judge sat there in silence just staring into the distance when the video was over, in pure disbelief as to what just happened. All that law school and time on the job to protect the sanctity of justice just to watch this dude vape into the camera and drive away in his car during an official testimony. Spectacular.

I really didn't think I would have any interest in this trial at first, but the highlights are too good to pass up. Alejandro, man. Just a real fucking dude who doesn't have time for this bullshit. Absolute legend.

P.S. Getting doormen, hospitality workers, etc. to tell crazy stories about celebrities they dealt with would be 10/10 content as long as they could avoid lawsuits. The dumb shit they had to deal with over the years would be endless comedy.