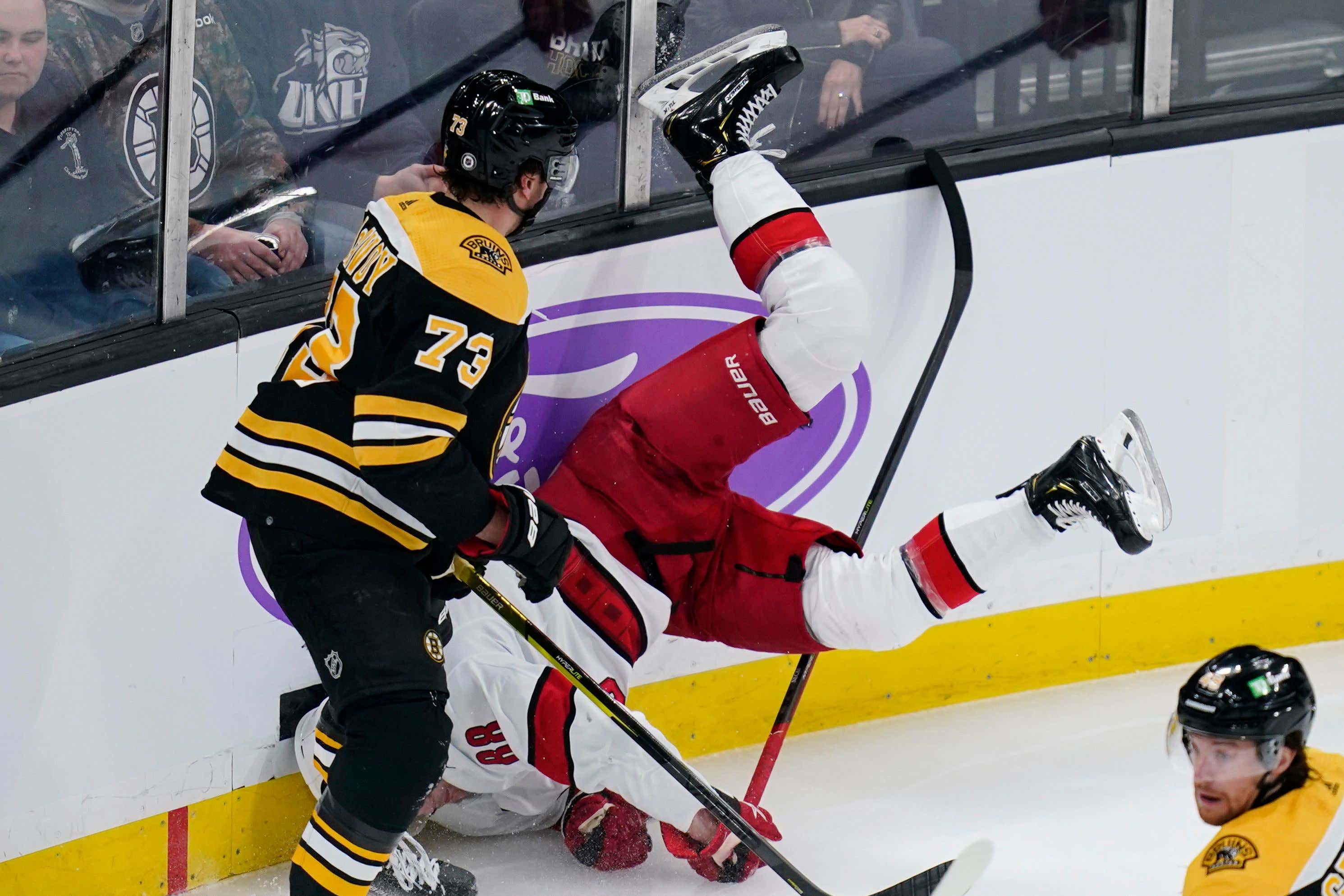 FOLKS,,, it's time… the real season is here, playoff hockey has arrived. You might worried if you're a B's fan since the Hurricanes have had the Bruins' number all year long, swept all 3 games and outscored Boston 16-1. Yikes. But the Bruins are a better team since the last time they played. It'll be the 3rd time in 4 years that the Canes and Bruins will meet in the postseason, obviously with the Bruins besting them two straight years in 2019 and 2020. Lots of history, two really good teams, should be a great series. LET'S GET INTO IT! 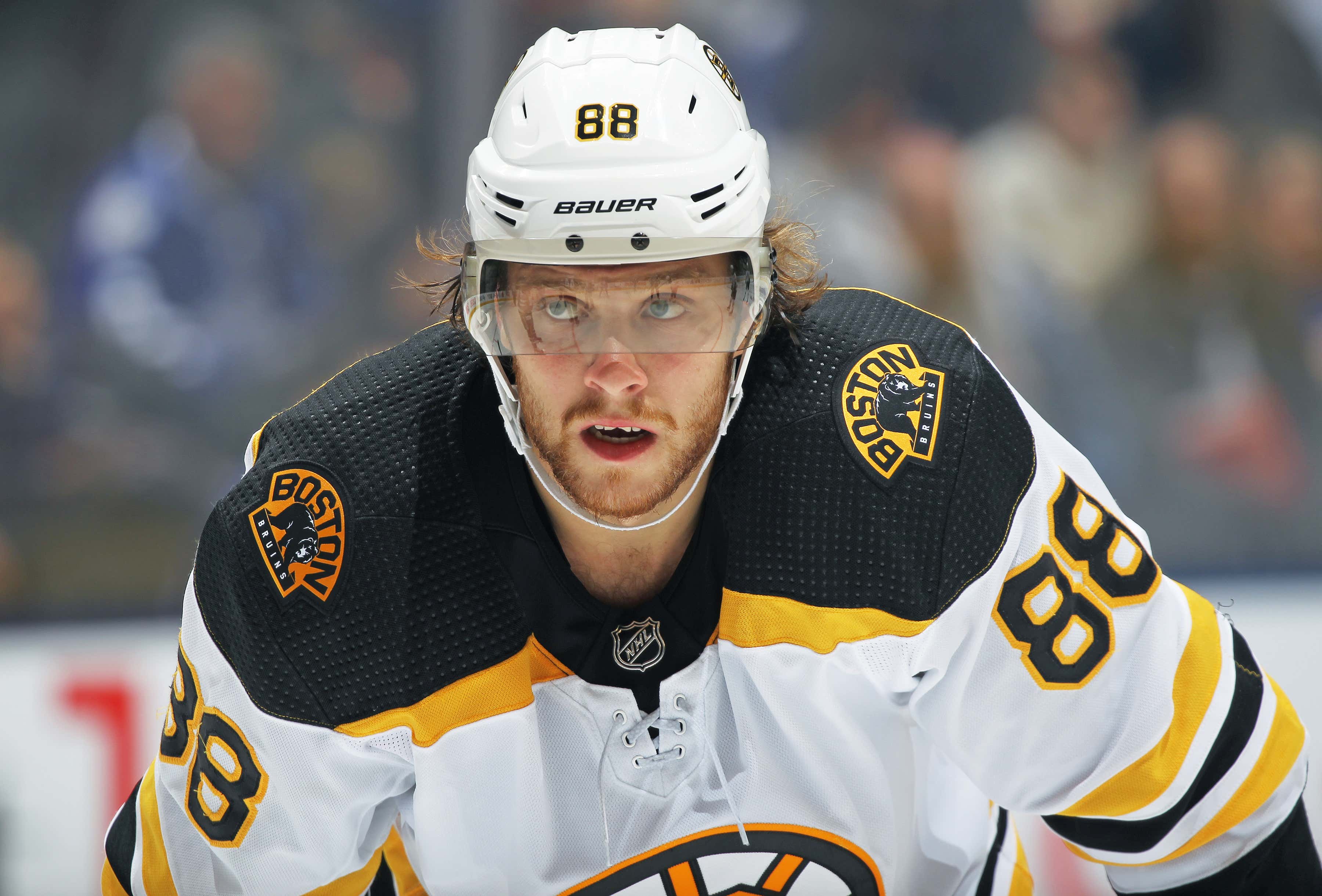 Patrice Bergeron is the favorite to win the Selke, and deservedly so. Having an outstanding year at 36 years old with 25G, 40A for 65 points in 73 games. He's a UFA at year's end, and has not given any indication of his status after the season is over. This is Boston's truly last real kick at the can, there would be no better way for 37 to go out than lifting Lord Stanley over his head for the 2nd time.

The Lambo, Brad Marchand only had one goal in his last 13 games to finish out the regular season. His drama with Trocheck only makes this series more fun. B's will need him to be ready to roll and I have no doubts that he will. I think Marchand elevates his game in the postseason, they'll have their hands full matching up against Carolina's top line, but 63-37-74 are too good to be stopped. Marchand will need to produce.

Despite his trade request lingering over his head for much of the year, Jake DeBrusk has really come on as of late in the season. Sliding up alongside and holding his own with Marchand and Bergeron has helped the B's tremendously. He wasn't moved at the deadline, and who knows what his future holds but he'll be an important player to watch this series. If we can get a glimpse of 2019 playoffs JD the B's will be in great hands. Finished the year with 25G, 17A for 42 points in 77 games. He's by far the fastest skater in Boston, and can match Carolina's speed with his own.

The best thing that happened to this team this year was Bruce Cassidy dropping David Pastrnak from the top line to play alongside Taylor Hall and Erik Haula. That balanced lineup is going to be crucial against Carolina. David Pastrnak has had a nagging core injury and you only hope he's somewhat close to 100% as the postseason begins. Took about 3 weeks off and looked pretty good in the handful of games he played down the stretch. Taylor Hall benefited (15G, 32A since Jan 1) from the new line as well, his 2nd postseason with the B's, I think he'll be a crucial player in this series, he has the speed and control to get past Carolina's D.

Erik Haula took the 2C role and ran with it since the start of the calendar year. If you asked me in December if I'd feel confident in Haula going into the postseason it would've been a big fat no. But credit to Haula, he's shut up all of the haters and has looked really good in the middle with Hall and Pastrnak. Facing off against his former team should help get the juices flowing as well.

I think the most important line of this series is going to be Frederic - Coyle - Smith, they were outstanding in the middle part of the season when they were put together but have cooled off as of late. Secondary scoring will be huge in this first round. If they can win the their match up, the B's can win the series.

Nick Foligno rounds out the 4th line with Tomas Nosek and Curtis Lazar but he'll have Anton Blidh and Chris Wagner as next men up if he can't match Carolina's speed. 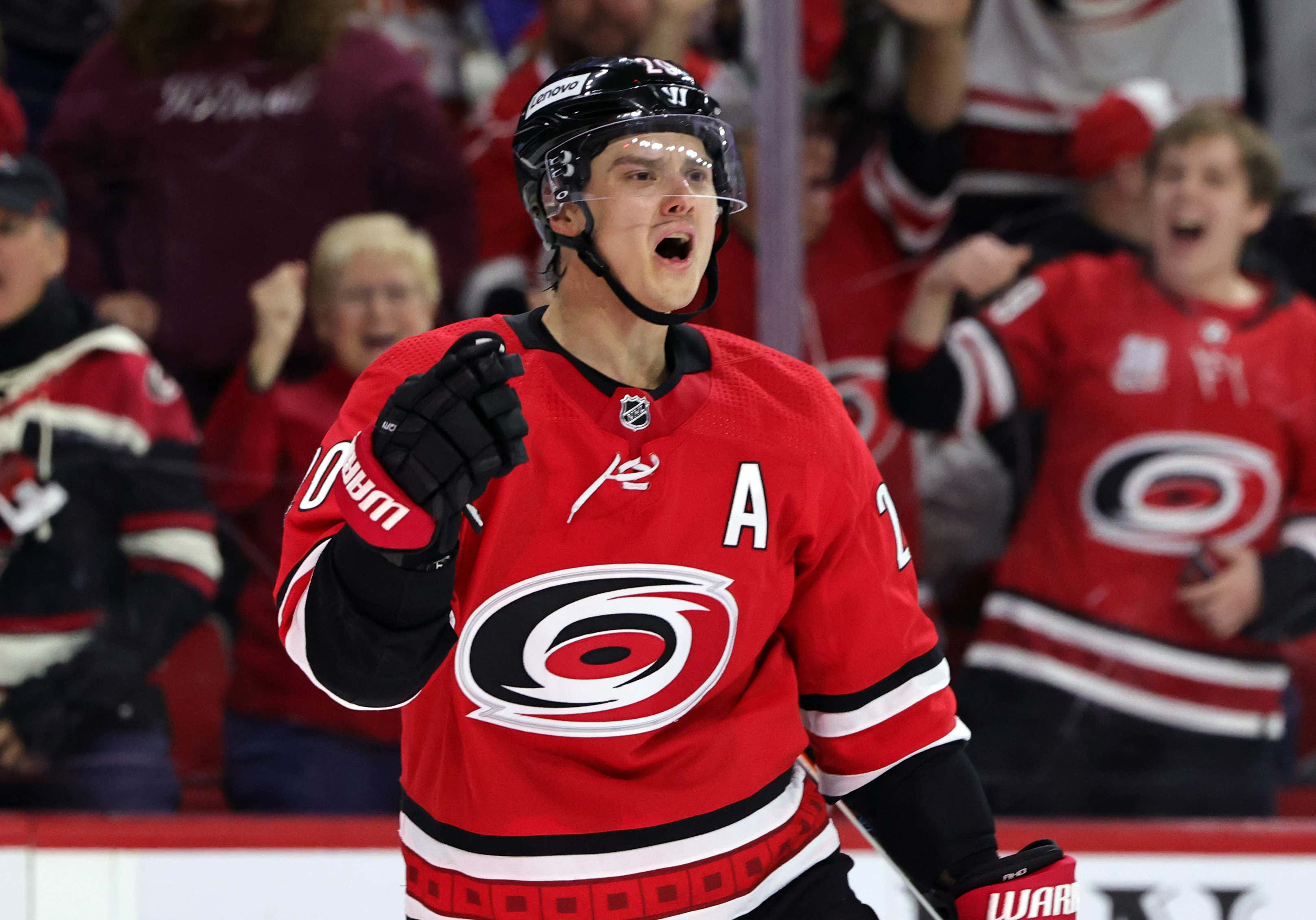 Sebastian Aho is the guy to watch in Round 1. He led Carolina with 37 goals, 44 assists for 81 points in 79 games. Feels like he always scores against the Bruins. His linemate Andrei Svechnikov is just behind him, with 30 goals (career high), 39 assists for 69 points this year. Rookie Seth Jarvis (17G, 23A, 40 points) is riding along the top line with them as well, but could see Rod Brind'amour moving Teuvo Teravainen up to the 1st line as things get going here.

The Prius Vincent Trocheck centers the second line alongside Max Domi and Teuvo Teravainen. Both players seem to elevate their games against the B's. Max Domi is no David Pastrnak if you're comparing 2nd line to 2nd line, but this is still a very good trio that can do some damage offensively.

Carolina has a really good defensive third line led by Nino Niederreiter who chipped in 24 goals this year. Their captain Jordan Staal is a great two way player, who will win faceoffs and will be banging bodies. Jesper Fast had a career year with 14G, 20A for 34 points in 82 games.

Martin Necas slides down to the 4th line alongside Jordan Martinook and Jesperi Kotkaniemi. Derek Stepan will be scratched Game 1, but wouldn't be surprised to see him slot in as the series gets underway. 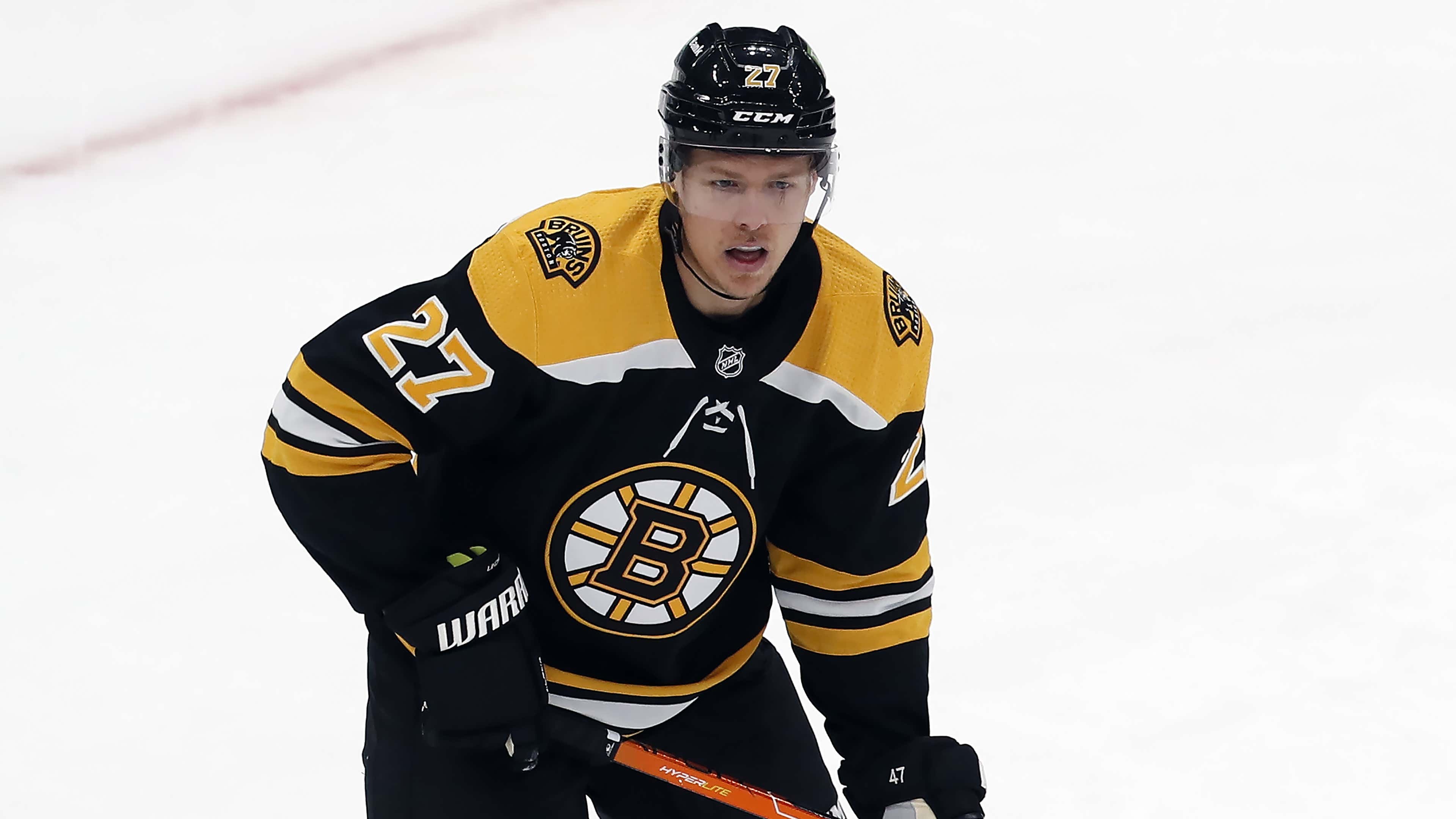 Boy oh boy am I giddy to see Hampus Lindholm in the playoffs. He and Charlie McAvoy will play a crucial role in stifling the Hurricanes' offense. Two players who can move their feet, get the puck out in transition smoothly, they will be the key cogs on defense, logging big minutes.

On paper Brandon Carlo isn't having a bad season, but the eye test doesn't match up. Too many turnovers. Hopefully that all goes away as the postseason starts, he's getting Matt Grzelcyk on his left side who will help him move the puck but they are going to have their hands full. I imagine you'll see Grzelcyk reunite with McAvoy if the Bruins need to generate some offense. If the 2nd pair can hold their own, they'll be in good shape to advance.

There's something about Cliffy Hockey in the playoffs, but the next man up on his heels is Mike Reilly. Has struggled this year after breaking out after the trade deadline last year. Derek Forbort has been somewhat of the mainstay on the 3rd pairing this year, very important penalty killer.. you just hope the 3rd pairing doesn't hurt you. 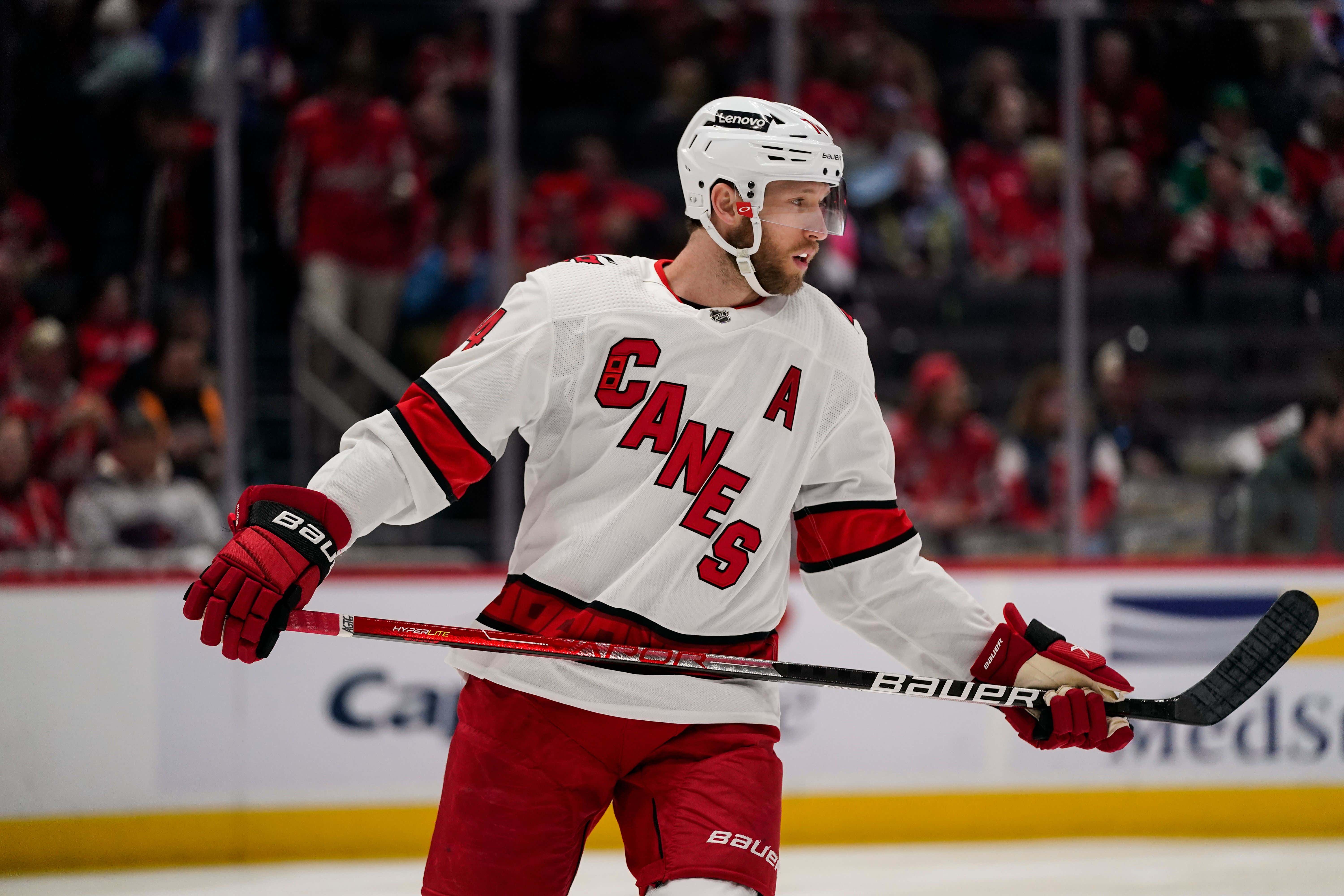 Carolina's Charlie McAvoy is Jaccob Slavin. Just an outstanding shutdown defenseman, while he may not have the numbers offensively, he's their Mr. Do It All. Tony DeAngelo (10G, 41A) has been a nice replacement for Dougie Hamilton.

Don't sleep on Carolina's second pairing though, Brett Pesce is pretty underrated as a shutdown guy and has a more physical game than Slavin does. Paired with Brady Skjei they will look to give the B's fits.

Ian Cole has been the mainstay on the 3rd pairing for most of the season, Brendan Smith will be his partner to start the series. But wouldn't be surprised to see Ethan Bear jump in. Feels like Brendan Smith has played against the Bruins a billion times in the postseason. 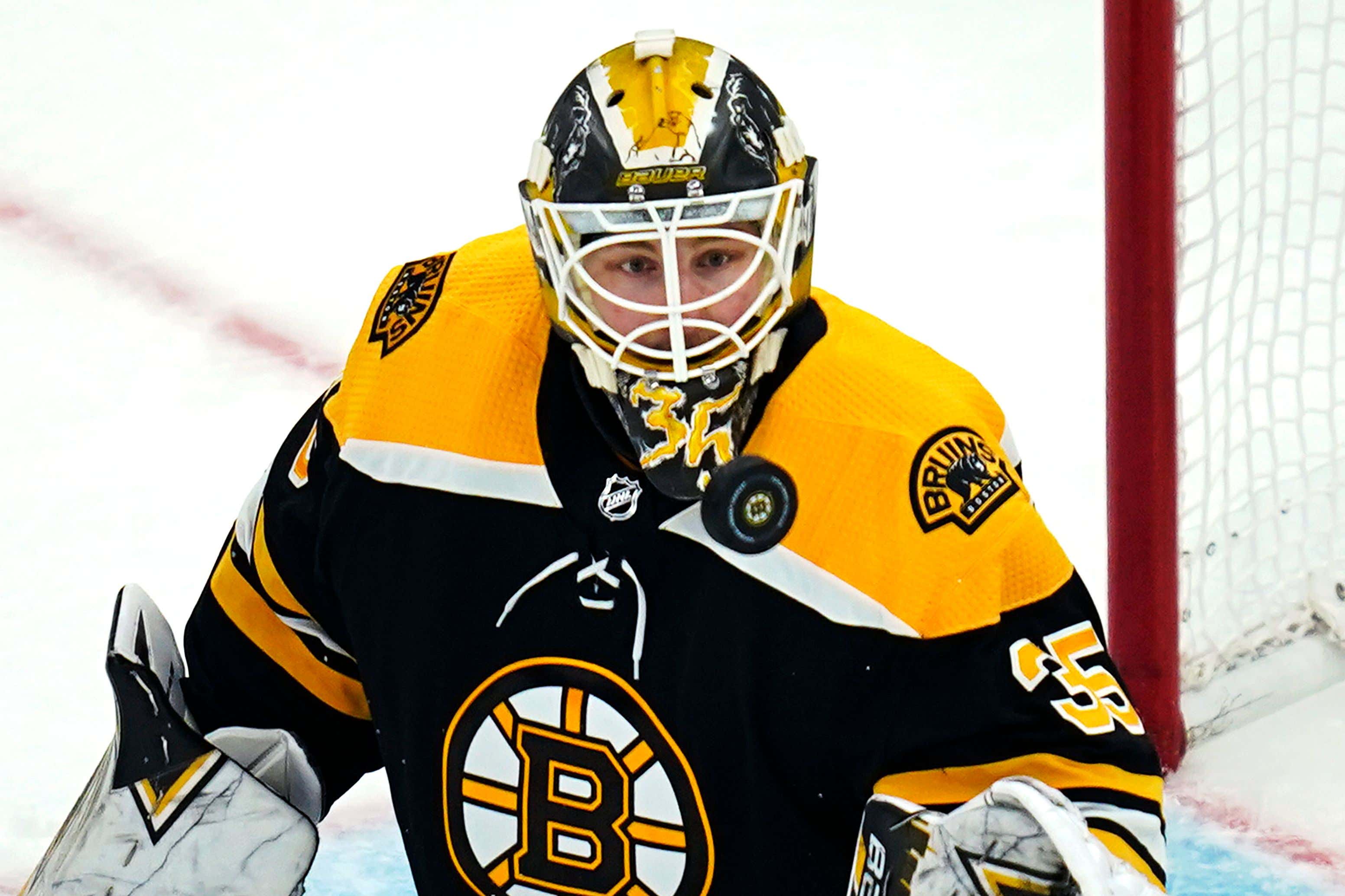 For the first time in a decade the Bruins will go into the postseason without Tuukka Rask. Linus Ullmark will be the Game 1 starter tonight as he surpassed Jeremy Swayman late in the season. Ullmark's best stretch this season came in mid March when he posted a 9-1 record, 1.50 GAA and a .945 SV%. That being said, wouldn't be surprised to see Swayman go in net if Ullmark looks shaky at all as this will be Ullmark's first postseason experience. Both goalies are inexperienced and will need strong defense in front of them if the B's want to advance. Ullmark's net for now. 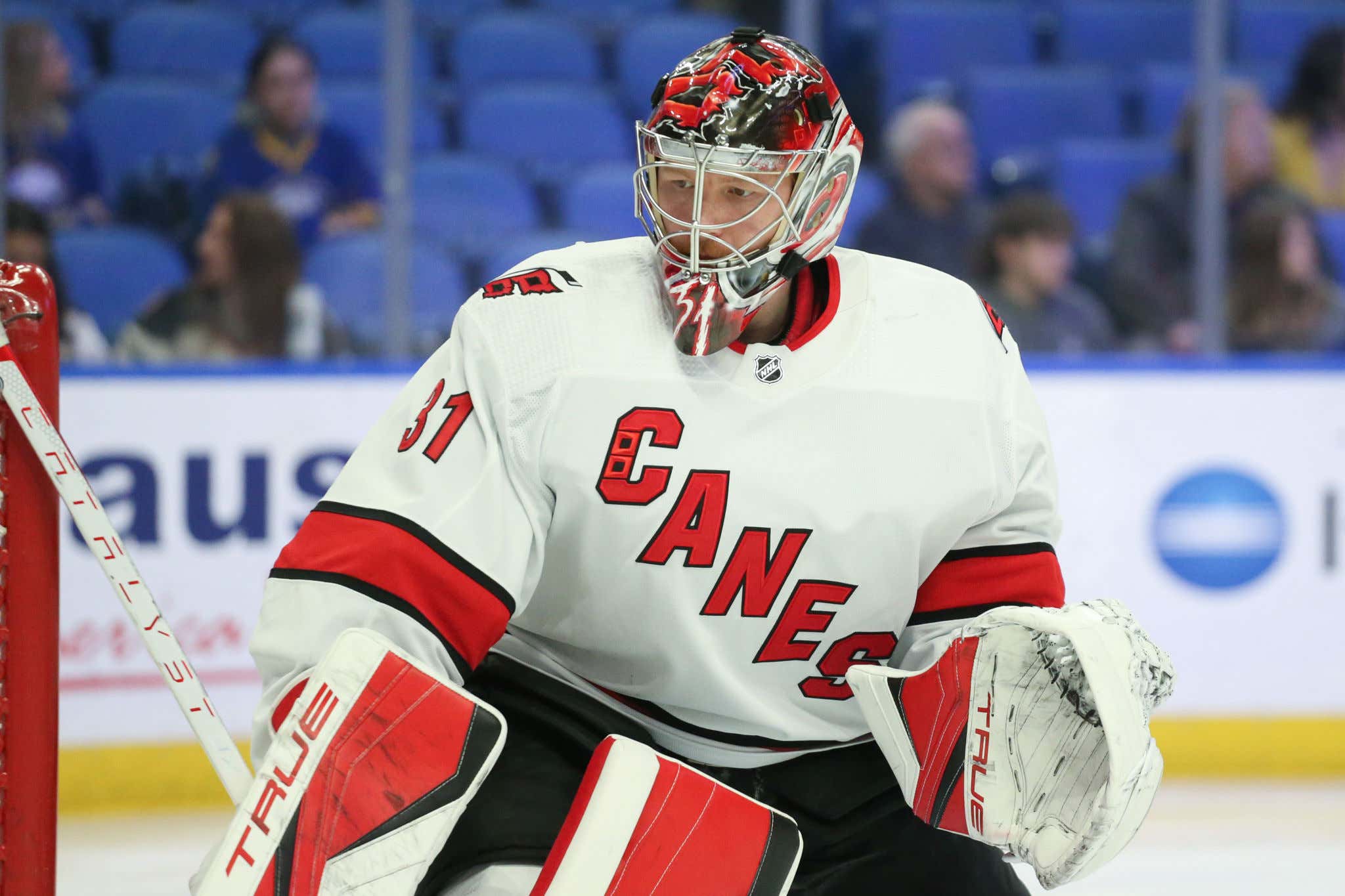 The Hurricanes' goalies are limping into the post season, Freddie Andersen (35-14-3, .922 SV%, 2.17 GAA) has been out with a leg injury since April 16th and just a couple weeks ago Antti Raanta (15-5-4, .912 SV%, 2.45 GAA) was injured (minor) as well. Andersen, who will likely be up for the Vezina, especially stoned the Bruins this year (was in net for all 3 wins, allowing just 1 goal) in the regular season but it doesn't seem likely that he'll be fit enough to start Game 1. Pyotr Kochetkov went 3-0 in Raanta's absence down the stretch but tonight's starter will indeed be Antti Raanta.

Advantage to Boston in net until Freddie Andersen does indeed return.

The Bruins PP? Absolute trash as of late. They finally broke through in the second to last game of the year, snapping an 0 for 39 drought. 0 FOR 39!!!! David Pastrnak's injury didn't help, but they are too talented to have this drought bleed over in Round 1.

Throw the regular season record out the window… the playoffs are a different breed and the Bruins should be ready to go against the Hurricanes. B's have to start games on time, Carolina was 39-4-6 when scoring first this year. It's going to be an absolute battle with two really close teams. Carolina is incredibly fast and in your face and will try and suffocate the B's, and they have an excellent penalty kill… there's a reason why they won the Metro. This isn't going to be a cake walk, but the difference in this series right now is Freddie Andersen being out and Linus Ullmark being lights out down the stretch. Boston's experience should help, and they'll need their secondary scoring to come through if they want to advance. I've got the B's in 6.

The B's will start the playoffs on the road as the Hurricanes have home ice alternating days. Alternating days, but that Game 4 12:30 pm start… yuck.

All odds are provided by the Barstool Sportsbook. Gambling Problem? Call 1-800-GAMBLER for help. 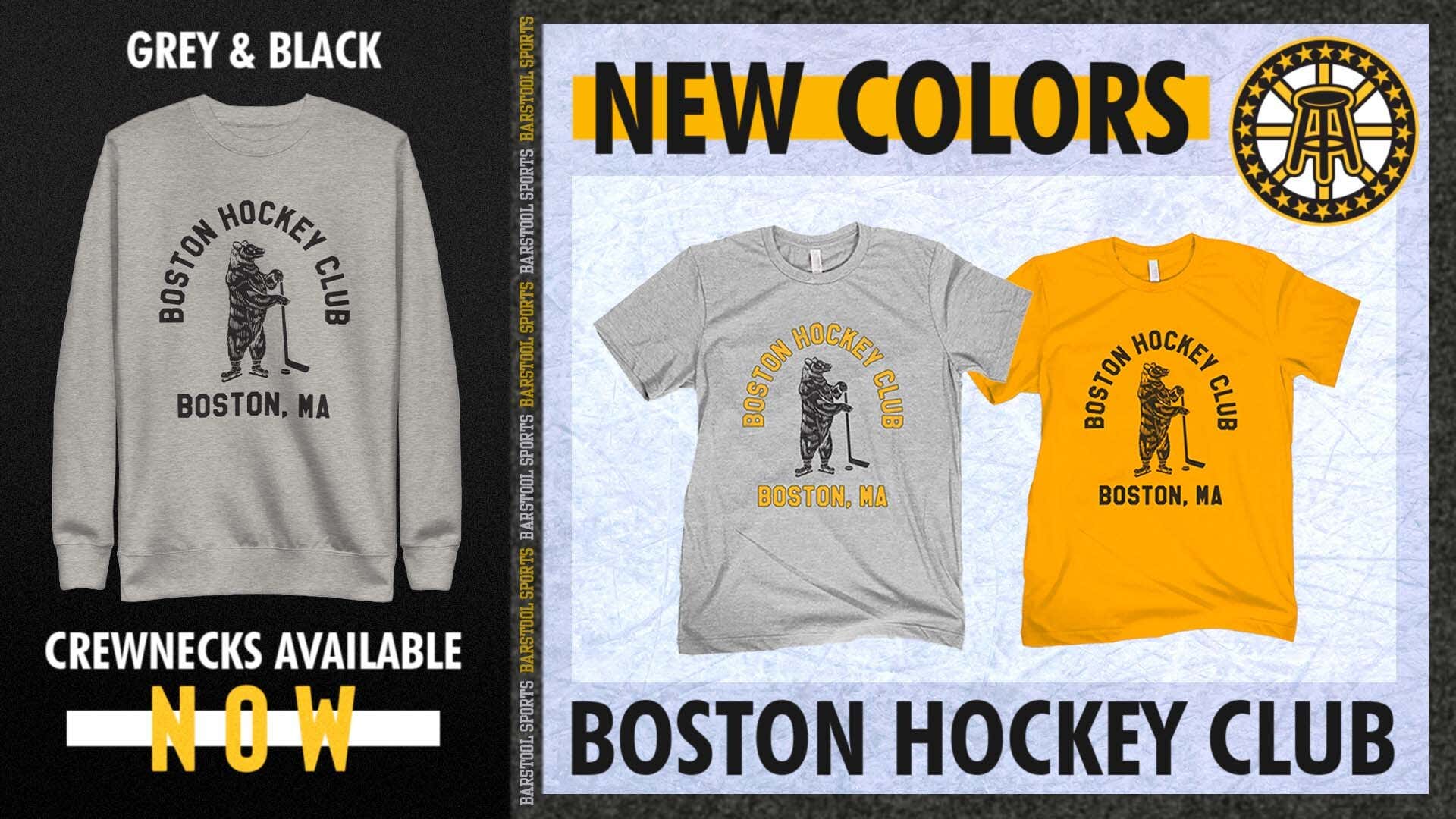 Give me all of the hype videos…

It's a great night to win a hockey game. LFG.