Margera was initially involved in the production of the franchise's newest movie "Jackass Forever," which came out in February, but he was fired in August 2020 after he tested positive for Adderall.

Margera, who has long been open about his struggles with alcohol abuse, was approached by Knoxville, Tremaine and Jonze in 2019 about signing a "wellness agreement," which he did without consulting a lawyer.

That agreement included daily drug tests, which Margera passed for a time. He was able to sign a contract with Paramount to work on the new movie, which was in place until he tested positive for Adderall in August 2020.

Margera's lawsuit, which was filed last year, stated that he was prescribed the drug by his doctor for his ADHD and that dismissing him over that was discriminatory.

It also states that Margera was the main creative force behind the franchise.

If you haven't tracked Bam's trajectory the last few years you might be thinking, "They fucked him over for taking some Adderall?" but as someone who's been following along pretty closely (I grew up in the West Chester area a lil' obsessed with those guys) there was clearly so much more going on than that. When I first started at Barstool I wrote about Bam a lot, but things got to the point where I'd decided to stop because it wasn't entertaining or light gossip - it was just scary & worrisome. This is morbid, but I started to fret that one of the next blogs would be in memoriam.

In fact, a lot of people were extremely concerned, including the Jackass guys who he seemed angriest at. He'd go on long written/verbal rants against Knoxville, Steve-O & Novak among others accusing them of various wrong-doings. Thankfully they all knew to hold steady & just keep showing support, especially Steve-O & Novak who'd been in his shoes battling addiction before. 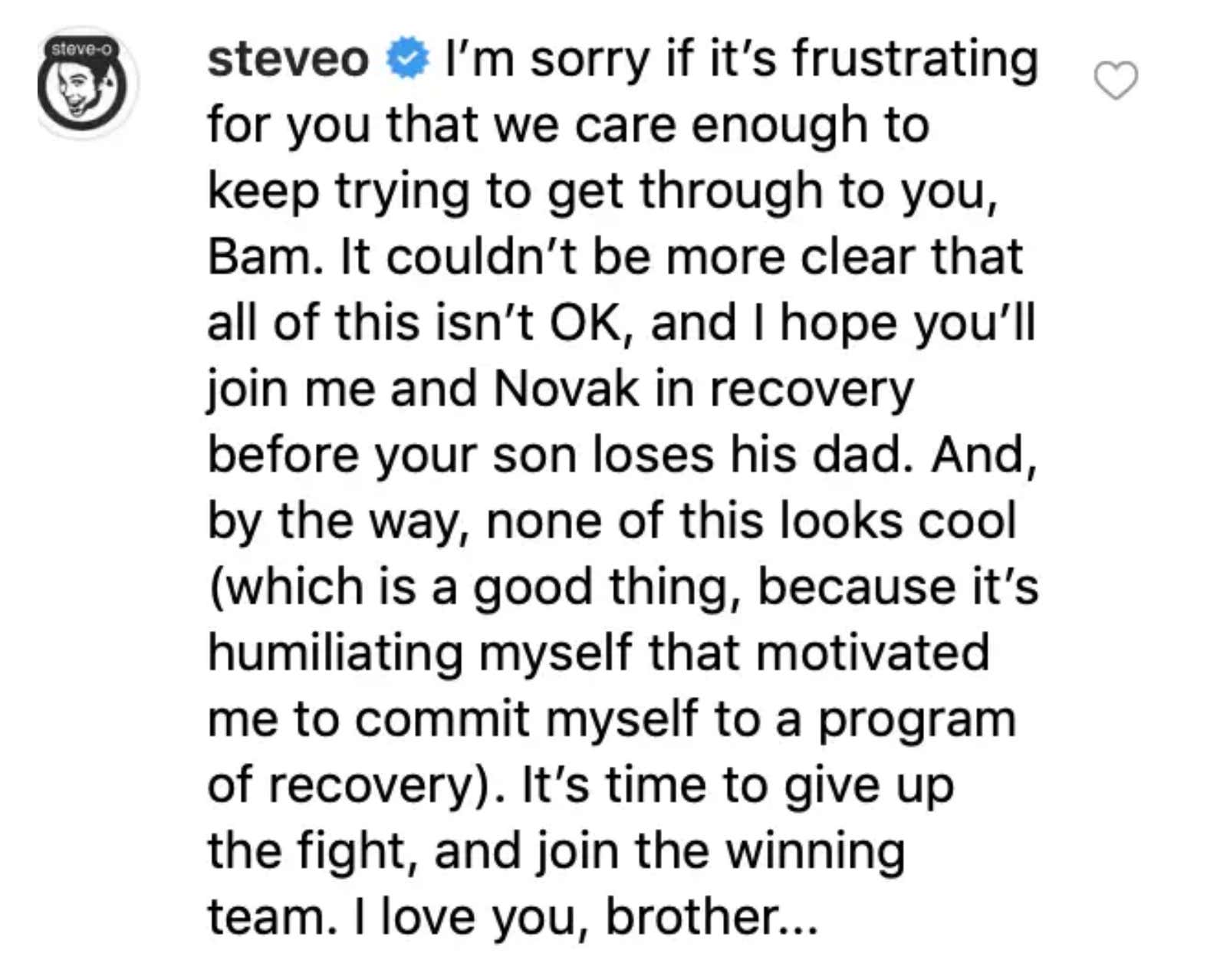 Now Bam has dropped the lawsuit, and he's been working with Novak (among others) to get back on his feet. Recently several of his posts have included messages like this where he's clearly taking a step back from social media & letting others give updates to the fans & people rooting him on:

The pressures of the public spotlight are overwhelming, and trying to live up to expectations can lead to disappointment. This stress is even greater while going through recovery.
-
From all your positive reinforcement, Bam does not want to let down his family or you.
-
With that, Bam’s trusted lifetime friends and family are united on all fronts. Not only help Bam through his recovery but also to support others struggling with addiction and mental health.
-
In short, Bam is making great progress, and 100% focused on his health, and his family. We, including Bam, will keep you updated.
-
Big thanks to everyone for your unwavering dedication, and support throughout this wild ride.
-
FuCKY YEAH

Love to see it & sending good vibes that this process continues in a positive direction. Anyone who loves an addict or who's dealt with issues themselves knows what a tough, heart-wrenching roller coaster ride it can be and I'm glad he has such a strong support system. Good stuff.

Oh and, most of all, I'm just glad that Hulk Hogan was wrong that one time. Looks like plenty more Bam to come. 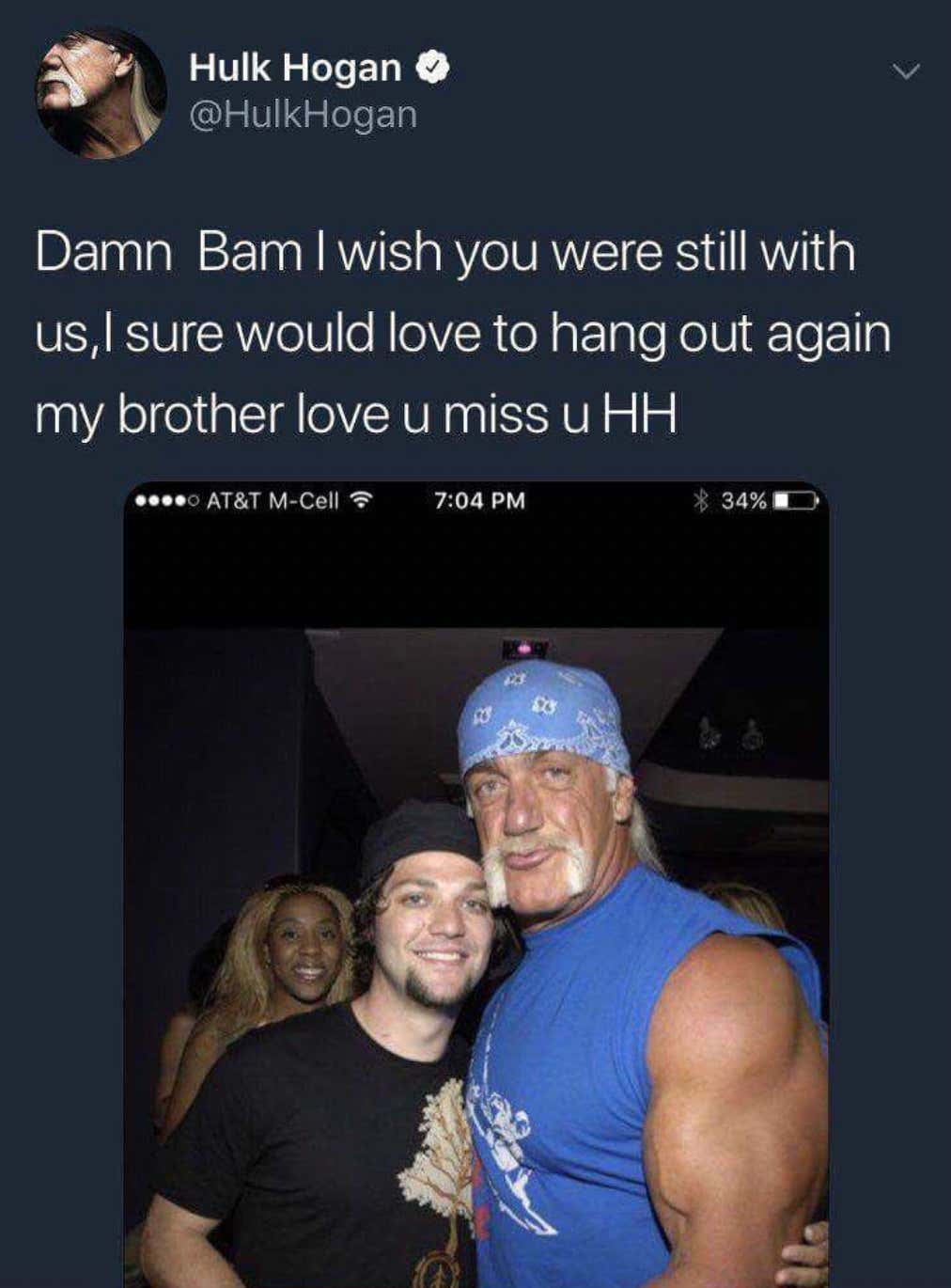