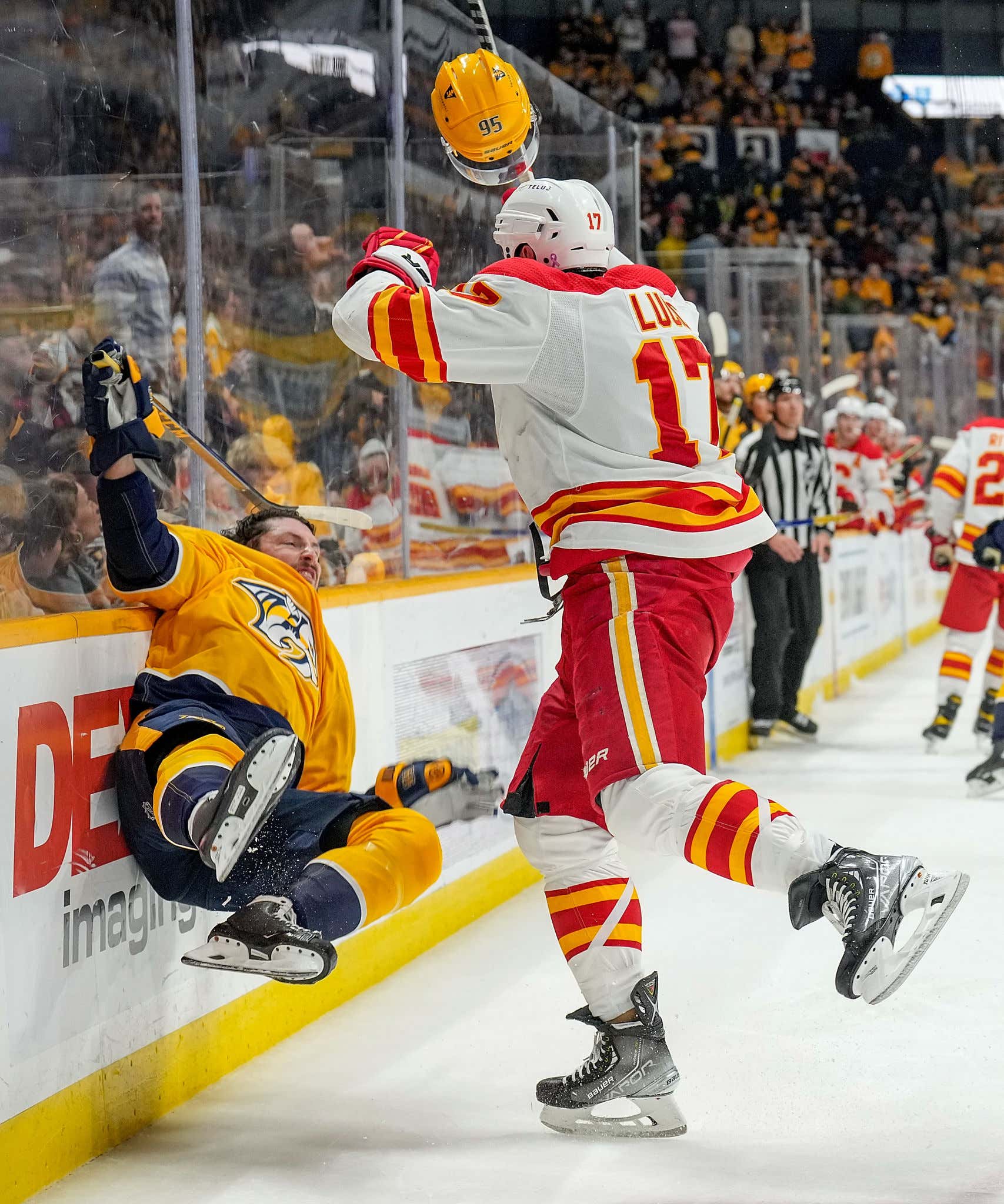 If the NHL knew what was good for them, they'd just end the regular season today. I mean 15 out of the 16 playoff spots have already been secured, and that 16th spot is just a formality at this point waiting for the Stars to beat Arizona later tonight. So with all the playoff spots already locked up, let's just give the people what they want need with a 7 game series between the Calgary Flames and Nashville Predators. Because of last night's game was any indication, those teams might start beating the shit out of each other before the warmups are done in game 1.

Like all greasy activity when it comes to the Flames, it all starts with Matthew Tkachuk. He may be a 100-point scorer on the stat sheets, but he's still a total rat at heart. So Tkachuk "accidentally" drills Duchene right in the mouth with his stick, Duchene responds with a little spear to the nuts, and we're off.

Tensions are high after that one and about a minute and a half later, we get a heavyweight tilt between Lucic and Borowiecki.

Bit of a ragdolling there. Not the greatest showing out of Borowiecki. But it sure as shit got Lucic dialed in for the rest of the night, and we'll get to that later.

Again, there's nobody in the league who is better and being the biggest prick out there on the ice than Matthew Tkachuk. I feel like other teams just see his face and immediately have every single one of their wires cross. So after the period the Predators weren't too happy with Tkachuk being careless with his stick. Being the good ol' boy that Matthew is, he offered to sign the stick and give it to them.

Guy is a 100-point scorer. That stick might be worth something one day. At the very least you're bringing him a few hundred bucks on SidelineSwap. You can tell that Matthew was raised the right way.

But yeah. 11 total penalties called in the 1st period. A couple of fights. Duchene and Tkachuk mixing it up. And both of them would end up getting on the scoresheet later in the game. Almost a shame they didn't drop the gloves or else I think Duchene would have had his first Gordie Howe hat trick of his career. But speaking of Duchene again…

Holy shit. What an all-time interference. Pretty sure you can't do that, but still. Lucic with an absolute bulldozer bucky pop. And credit to Lucic for not fighting Borowiecki again after that hit. Boro would have gotten an instigator on that one and it would have cancelled out the powerplay that Nashville was about to go on with 2:48 left in the game to secure the win. Wouldn't want to give Calgary any chances to tie that game up and send it to overtii…..

THE RAT KING GETS IT DONE WITHOUT A TENTH OF A SECOND TO SPARE.

That's what makes Tkachuk so special. He's going to stir the pot. He's going to get into the antics. But he's also going to deliver when you need him the most. And then the Flames capped off the comeback with Elias Lindholm scoring his 41st of the season in overtime.

Sticks to the face, spears to the nuts, heavyweight fights, massive hits, and big time goals. That's what playoff hockey is all about. Now let these bastards run it back for another 7 and let's see how long it takes before it devolves into total anarchy.