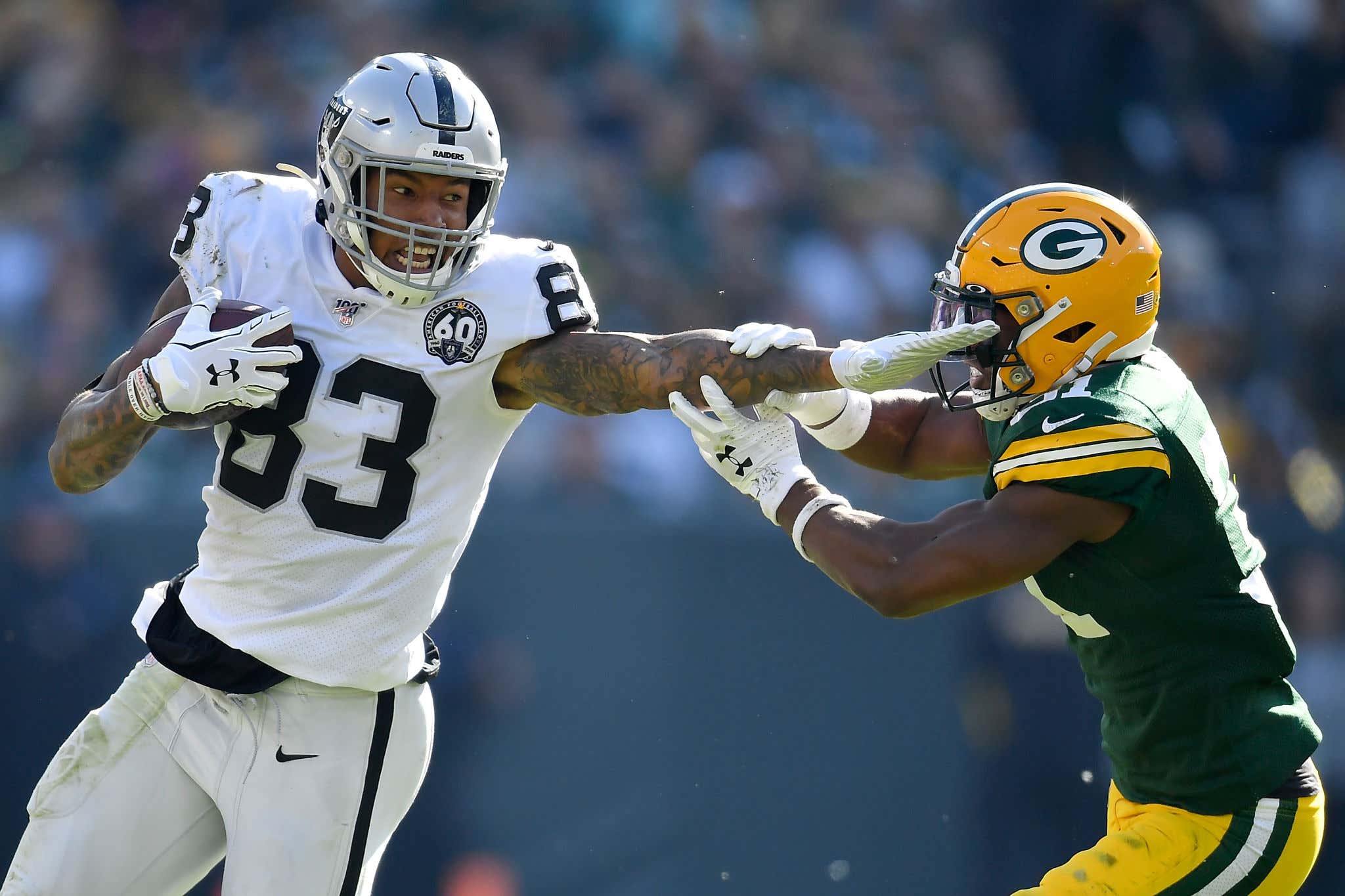 Since the surprise Davante Adams trade went down in March Packers fans, including myself, have wondered where the hell this team is going to turn to next to fill out Rodgers' offensive weapons. As it stands right now the depth chart reads as Allen Lazard, Sammy Watkins, the ghost of Randall Cobb, and Amari Rodgers at WR with Big Bob Tonyan coming off an ACL at tight end. Not great!

The Packers are armed with 4 picks inside the top 60 and they'll almost certainly be taking multiple WRs with those selections. In a perfect world they also trade for a vet who Rodgers can immediately trust. Some names that seemed like fits were DK Metcalf, A.J. Brown, and Deebo Samuel (not happening with SF). Well, as of last night Raiders star tight end Darren Waller entered the conversation. Well hello there Darren…

The report is coming from Aaron Nagler who is well-trusted name in the Packers media world. I buy what he's selling when he talks. Here's the scoop.

According to a pair of league sources, however, the Packers are targeting a veteran tight end. Specifically, Las Vegas Raiders tight end Darren Waller. The Packers and Raiders have engaged in talks regarding a trade of Waller with an eye toward a deal getting done during this week’s NFL draft.

Waller is also apparently the player the Packers were trying to pry away from the Raiders during the negotiations around the trade of Davante Adams, a move that was nixed when both sides were reminded that league rules prohibit players being part of compensation for a trade of a player on an unsigned franchise tag.

The NFL has a rule where you can a tagged player cannot be traded for another player, thus nixing the plan for Waller to originally be included in the Davante deal instead of the 2nd round pick.

Now why wouldn't this deal be done at the moment? Maybe Vegas is looking to get more from Green Bay and spark some competition for their prized tight end. Even though I've learned to stay clear of trade rumors when it involves Green Bay, I think there's definitely something here.

So what's the deal with Waller? In '19 and '20 he put up insane numbers for the Raiders grabbing at least 90 balls and posting over 1,100 yards in each year. This past season he dealt with the injury bug a bit and missed 6 games while compiling a fairly down year by his standards. He'll be 30 years old by the time the season starts and has two years left on his deal, the second one with no guaranteed money tied to it. You likely giving him a new deal along with the trade, hence why Vegas is shopping him. Cheesehead TV speculated on what that would look like…

So, if the Packers agree to a $42 million/3-year extension, a $14 million yearly average (the same number Mark Andrews got from the Baltimore Ravens last year), it would be in reality a $55.85 million/5-year deal - with an affordable $11.17 million average, and potentially a cheap $6.2 million cap hit in 2022.

GM Derek Carr got wind of these rumors and shot them down for what it's worth.

As much as he probably doesn't want to lose his TE, I don't think he has much say in the matter especially since they went and got his boy Davante in the offseason. With Carr and Davante's new deal it makes it very hard to fit Waller into the equation.

Nagler responded to Carr's tweet that disputed his report.

I'm very excited for what's to come in the next few days. The Packer have to make a splash and get Rodgers some new bodies to throw to. They have 4 premier picks and trade partners to do business with. In Gute we trust, just don't draft another QB.