Loudwire- Noel Gallagher's guitar that was smashed the night Oasis split up is going up for auction in May. Liam Gallagher allegedly broke his brother's Gibson ES-355 after a fight right before a live performance in 2009.

The Gibson ES-355 has been deemed one of Gallagher's "most important guitars" and was his favorite instrument from 1996 to 2011. It was restored a couple of years after the incident. Phillippe Debreuille restored the guitar and has also worked on Jeff Beck, Iggy Pop and Mark Ronson's instruments, according to Guitar World. The guitar will soon go up for auction and comes with its original hard case and a letter of authenticity signed by Noel Gallagher.

There's a pretty cool piece of rock n' roll history going up for auction next month, and I thought I'd share a little bit about its backstory here on the blog, considering most guitars don't START at a-hundred-and-sixty grand a pop.

Oh, and according to Artpèges, the French gallery holding this sale, this guitar could sell for as much as $540,000 at auction.

Now, obviously, this guitar wasn't SOLELY RESPONSIBLE for the breakup for Oasis - they were headed that way eventually, especially by this point - but it WAS the straw that broke the Gallagher's back.

If you've got a few minutes, listen to Noel tell the story himself here....

Oasis is on what would eventually be known as their final world tour, and nearing the end of it in Paris after being on the road for over a year supporting their record, 'Dig Out Your Soul'.

They're scheduled to give a pair of headlining performances on back-to-back nights of The V Festival, but Liam forces the band to cancel one of the nights due to laryngitis, which Noel later claimed was actually a bad hangover. Liam would go on to sue Noel for libel months after this, and won, so Noel had to apologize - but I digress.

A few nights later, at the Rock En Seine Festival, Liam allegedly got into a huge blowup backstage over Noel talking badly about him to the press, and this resulted in Liam throwing a plum (yes, a plum) against the wall and wielding one of his own guitars violently; "like an axe", according to Noel, "almost taking [his] face off".

Fed up with his younger brother's shenanigans and bravado at this point, Noel grabbed Liam's guitar and "put it out of its misery" after it ended up on the floor, smashing it to pieces in front of the Oasis frontman. Not to be outdone, Liam then ran to the side of the stage, where guitar tech Jason Rhodes was soundchecking Noel's classic Gibson ES-355 (just minutes before the band was set to take the stage), and he destroyed it - causing Noel to walk out, cancelling the show/tour and quitting the band for good.

This wasn't just any axe, either - it was Noel's main electric guitar for years at that point and made appearances in plenty of important videos/gigs in the band's history…. 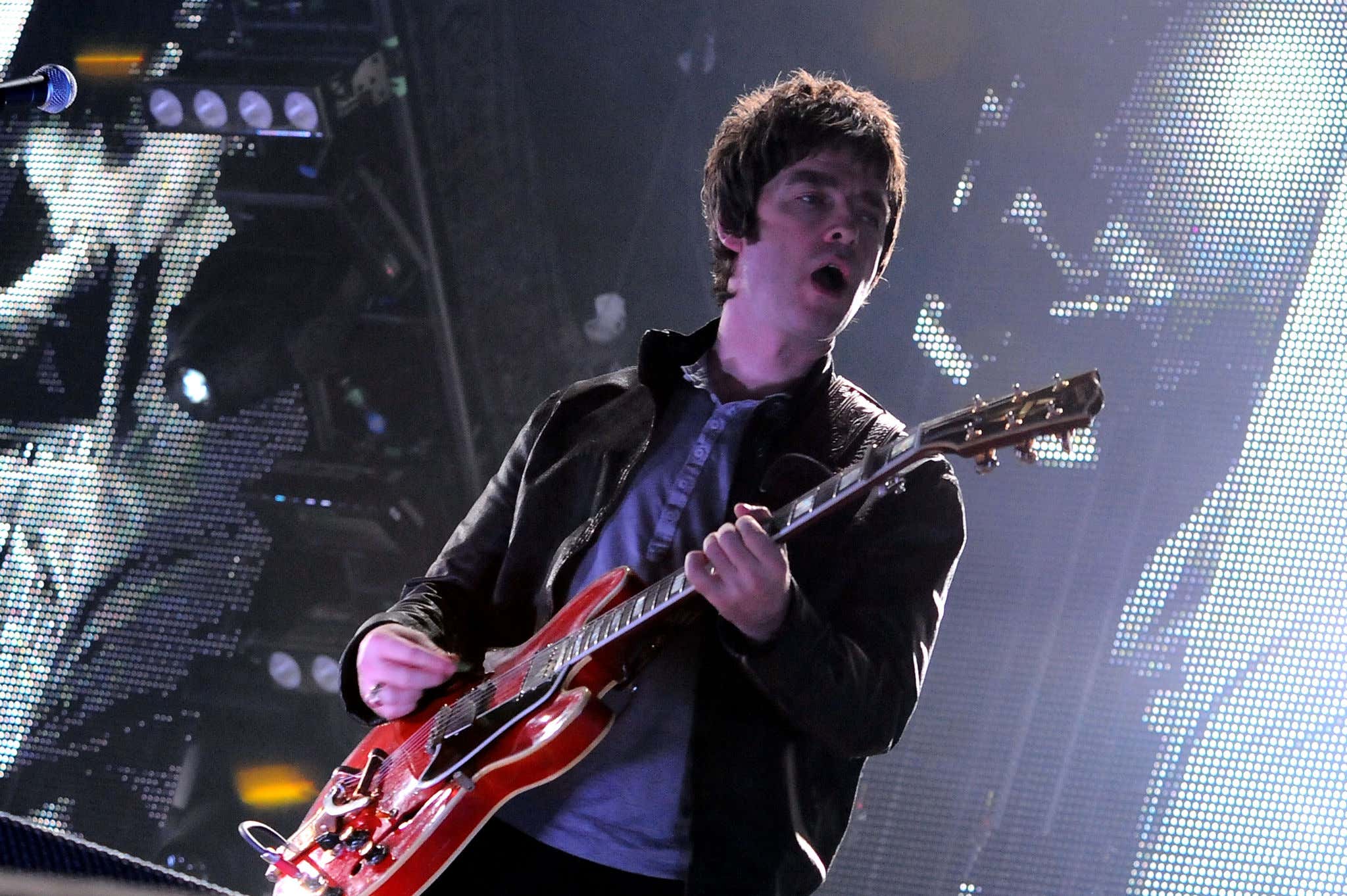 Personally, I feel like the fact that they restored/repaired the guitar to the point you can't even tell it was damaged kinda ruins the appeal of it a little bit. Don't get me wrong, I still think this guitar is probably the literal "Holy Grail" when it comes to Oasis memorabilia, but it'd be a lot cooler smashed to pieces in a shadowbox than sittin on a stand like any other ES-355.

I kinda hope Liam buys it just to smash it all over again on stage at Knebworth this year….but then again I'm still holdin out hope for an Oasis reunion so I probably SHOULDN'T be rooting for that to happen.

If anyone's got half a mil to lend me, I'd be down to buy it so we can prevent that from happening!