I am starting to realize that this will sadly be a talking point until the end of time. People are dug in and moving goalposts instead of offering a mea culpa. Not necessarily singling out Ben here, but there seems to be a shift in the "sEtH JoNEs sUcKs" crowd to now talking about how the trade was bad and that it set the franchise back. The problem for that crowd is that their precious charts now seem to show Jones in a much more favorable light 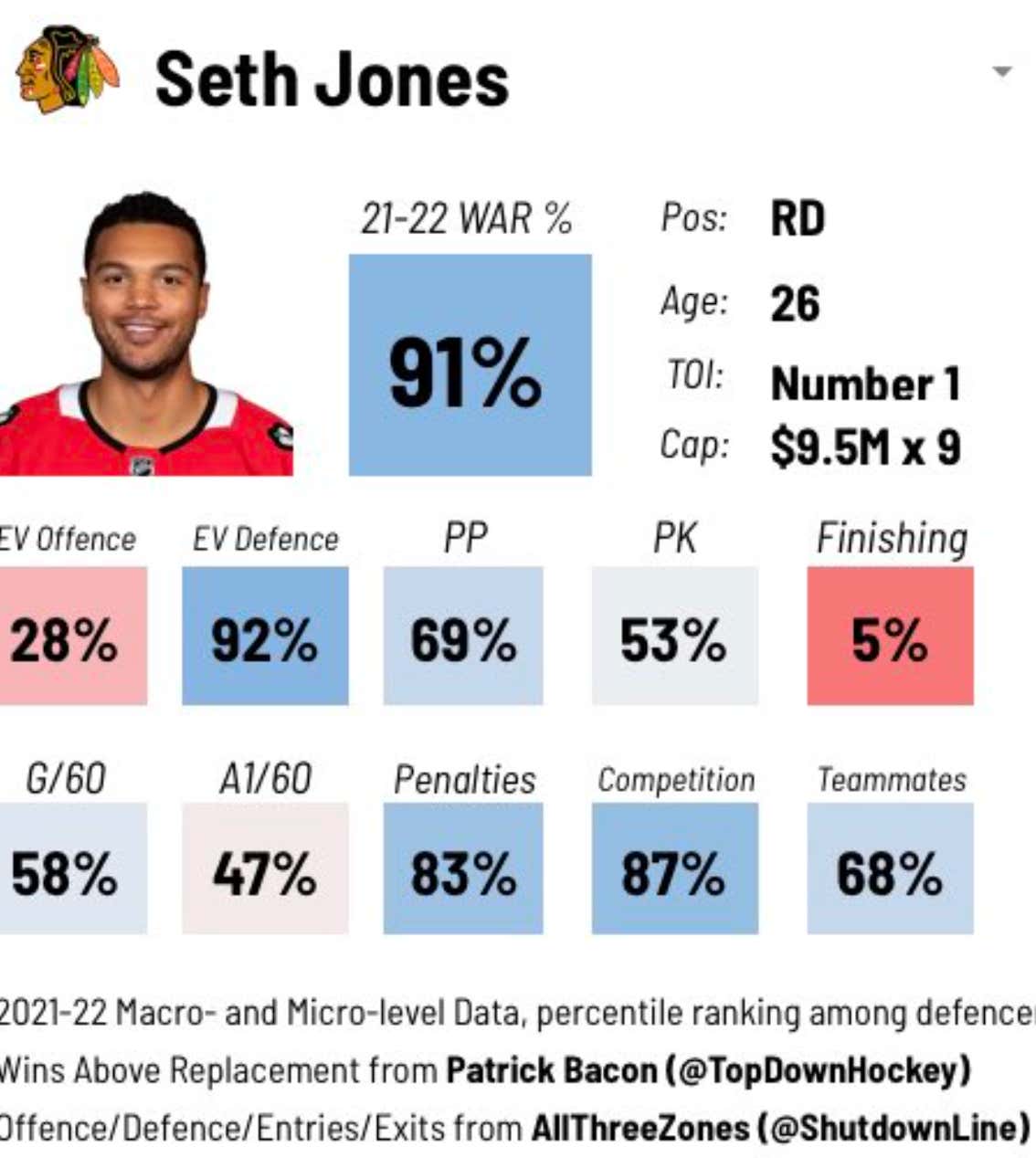 That chart above is from that guy JFresh who really spearheaded the Seth Jones Sucks movement last summer. This is what I said in June before the trade was official about hockey analytics in general

I understand the data points being used. I do think they have some value…BUT I have yet to see a set of data points in hockey that tell the full story about an individual player. Hockey is soooo fluid. It is non-stop. It is so hard to chart EVERYTHING that leads to chances. I've seen the micro stats. I have seen the macro stats. I have seen people try to make a "WAR" in hockey the way they have it in baseball, but hockey is too complex. Every situation is different. It's not just pitcher vs batter in a series of situations that are static. People like things simple. They like to feel smart. They want to be able to point to a red box and a percentage or a bar graph and say "SEE, he SUCKS". While the other group wants to show you how many minutes he plays and the points he produces. "SEE, he's awesome". Again…it's not simple.

It's almost as if…I was right the entire time. If the hockey analytics were really good then they would be predictive. You wouldn't have wild swings.

The reason you have the wild swings is because…hockey has too many variables. It is impossible to establish a hierarchy of values, decisions, and data points on a given play because there are too many things to chart that are happening all of the ice in constant motion. Player positioning, teammates on the ice, opponents on the ice, when the data point occurred in a shift or in a game, the score of the game, the coach's strategy, etc. I could go on and on. Even people who sell proprietary data to NHL teams and have far superior tracking systems than what is publicly available will admit that their data systems are a window in a game or a player, but can't possibly be predictive or tell the full story. The rational mind tends to fall in love with it's own creation. I think that is what happens to some people in hockey analytics. Then you also have a ton of stupid people on the internet who don't watch hockey or don't know how to watch hockey and the see a chart with red and blue squares that makes the game simple for them to understand and they run with it rather than learning, watching, and forming their own opinion. For some reason the charts make them feel smart. I will never understand that.

Jones isn't a perfect player. He isn't Victor Hedman. He also doesn't suck by any stretch. He is a bonafide #1 defenseman and any chart that says otherwise should be thrown away. I am not a professional scout by any stretch. I just watch a lot of hockey. Jones struggles a bit in transition defense. His gap control isn't the best and he gets caught flat footed at times because of that.

Jones isn't a bonafide Norris guy, but he is a true #1 Dman on a team that didn't have one and hadn't been able to draft/develop a competent NHL defenseman in literally 15 years (Keith, Seabs, Hjalmarsson, and then nothing for Bowman's entire tenure). I don't think there are 30 #1 dmen in the league. The number is probably around 15. The Blackhawks secured one of them. And when you try to acquire a #1 dman instead of grooming one in house you're always going to have to pay a premium. That is what the Blackhawks did. I am in the awkward position of defending a Stan Bowman trade because I think he sucks, but this one is more than fine.

Ben Pope and others have said that the trade set the rebuild back. I don't see it that way. Here is another guy who agrees with Ben and he laid out his points

It is true that the Blackhawks didn't make the playoffs. That is hardly Jones' fault. There were a MYRIAD of factors at play here.

When looking ahead to the season I thought the Blackhawks would be right in the mix for the Wild Card in a tough division. I looked at their roster and made a few assumptions.

1) Toews would be back and effective

2) We'd see development from Dach into a top 6 center

3) They'd have improved goaltending because of Fleury

4) Jones would give the defense and the team a boost.

5) They'd figure out how to play under Colliton

Well…we now know…several of those things missed and there was a scandal looming over the team at the outset of the season. Nobody could play under Colliton. Toews took a while to get going. Kirby never really did. Fleury got traded. The season was DEAD before Thanksgiving. The Blackhawks entered this season with two years left with Toews and Kane. Trying to make the playoffs by adding Fleury, Jones, McCabe, etc was the right move in my opinion.

Trading for Jones didn't really change the rebuild timeline in my opinion. The rebuild was ALWAYS coming. Maybe now it is sped up by a year in earnest because of the GM vision/transition, but Toews and Kane aren't going to play forever. Jones has 8 more years. He was always going to be a part of a rebuild here. It was just a matter of when. Having a one piece of the rebuild set in stone and that piece being a #1 defenseman isn't a bad thing.

Jones is better than Boqvist. Always was. And more importantly…always will be. Boqvist isn't a guy you'll be able to lean on in big games against top players in critical situations. He has a great shot and is a good skater, but his brain, heart, and body aren't what you need to win a Cup. He will have some highlights on twitter, he will have some goals, but you will NEVER trust him and I don't want guys like that on the team and that is why I hated the pick even on draft night.

Sure, I would like to have Sillinger or whoever they were going to draft this year. Having said that…as good as Sillinger looks he isn't going to be some face of the franchise for the next generation. He looks like a very good player at 18 years old, but let's not put him in the Hall of Fame. That is probably true for whomever the Blue Jackets draft 6th overall in this coming draft too. I would love to have the pick. Odds of that player turning into a Jonathan Toews type of guy is exceptionally rare. They're good players who will be important players on good teams. They're not going to be McDavid, MacKinnon, Makar, Barkov, etc. A good GM should still be able to find enough players to get you back in the playoffs with a rebuild.

And that is going to be the expectation for Davidson and this rebuild. Playoffs. Being competitive every year. Pursuing things that are meaningful and trying to compete for a Stanley Cup. But…what we saw here from 2009-15 is never going to happen again. It just won't. Winning the Stanley Cup is basically IMPOSSIBLE. Ask Vancouver. Ask San Jose. Ask Toronto. Ask Buffalo. Ask you dad who watched the Hawks for 50 fucking years between Cups.

This notion that the Jones trade set the rebuild back just rings hollow to me. They tried to add to this team and future teams by getting a #1 defenseman. A thing that doesn't grow on trees. They tried to get back to the playoffs. It didn't work out, but a rebuild is likely going to look like exactly what they were trying for this year anyways. Jones will be on playoff teams here at some point (I hope). There was always going to be a rebuild in Chicago and Jones was always going to be a part of it. It was either going to start in 2024-25 or it would come sooner if this group couldn't make it work. Here we are.

Now the Blackhawks have a great player, a pro's pro, and a good person to build the next group around. That is a good thing and always will be.