It's so nice having a good season of Survivor. Season 42 delivered with another solid episode last night. I've been genuinely looking forward to every episode lately, and it's nice to have that excited feeling again towards the show. I feel like we know all these players on a personal level (with maybe the exception of Lindsay) and that makes us more invested. The editors have done a great job with this season and deserve a ton of credit for learning from their Season 41 mistakes.

We'll get into the blog recap, but also make sure you listen to Snuffing Torches on Apple and Spotify. And you can watch the full episode on YouTube as well.

Alright now onto the recap...

-We join the tribe after the Lydia vote out which left Romeo, Chanelle, Maryanne, and Tori on the outside looking in. Chanelle was upset at Hai for leaving her out. Romeo felt very betrayed by Drea (which I figured would be the case given how close they were pre-merge). And Maryanne was crying saying she feels left out just like in school with the cool kids. As if she's the first person in Survivor history to be on the wrong side of the vote. It was funny to me that in the shot of the "cool kids" you saw Rocksroy standing there as one of them. The king of cool.

-I want to give credit to Mike here for his unbelievable social game. He was watching Omar pray and asking questions about Islam and learning. Not necessarily what you'd expect from the old guy. I do believe Mike was genuinely curious, but this is just good social gameplay regardless. There's a reason everyone likes Mike and wants to keep him around. This is a good example of that.

-Omar also deserves credit for how he was playing both sides. He's really in the majority alliance and directed the last vote to get Lydia out. But since he didn't have a vote, he was able to pretend to be blindsided just like Maryanne, Tori, Romeo, and Chanelle were. It's a little risky to be playing both sides like that, but he did it perfectly.

-Jeff gave us the inside info that he was hiding a Beware Advantage under the sit out bench, just like last season when Xander didn't find it. He mentioned how disappointed he'll be if it's not found again. But I think it's crazy he expects people to pat down the bench they're sitting on. Outside of when Sarah found the one in Season 34, it's pretty unheard of for there to be an advantage on a sit out bench. They didn't see Season 41……

……except for Drea??? After the teams of five were drawn, Maryanne was the odd one out. But the reward was PB&Js and potato chips and Drea said she hates PB&Js so she volunteered to sit out. And she found the advantage under the bench. I think she might be psychic. Last week, she correctly predicted the hourglass advantage. Now she knew to sit out this challenge??? And she's also found an idol and the amulet! Does she have a family member on production???? Is she a psychic? Not sure what's happening.

-As for the challenge itself, Jonathan once again put on a Godly performance. Omar was draining shots for the other team and had them up 4 balls to zero. Rocksroy was for some reason shooting for the team Jonathan was on. Maybe Rocksroy averaged like a double double in high school and thought he still had it. But he couldn't hit a shot. Then Jonathan happened. He got up and drained all 5 shots in a row and won the challenge. It was incredible. There's nothing the man can't do. He's apparently a Steph Curry level shooter to go along with everything else.

-Drea's Beware Advantage was called "Caught Red Handed." She was told to take five paces from the water well and find a coconut. She saw one split open, lifted it up, and then reached into a pool of red and lifted out a piece of paper which was revealed to be the "Knowledge Is Power" advantage which we saw last season. But the problem for Drea is she now had red paint all over her arm. She poured a lot of water over it to wipe herself clean but eventually had to scramble back to camp to not get caught. Tori noticed a spot of red paint Drea missed and began questioning her about it. Drea said she was painting, but Tori saw right through it. She's a very perceptive player. She can seemingly always tell what people are lying. If her social game wasn't so bad causing everyone to not like her, she'd be a real threat in this game. But it didn't get brought up past this, so Drea might be in the clear.

-I liked this "caught red handed" twist. Stuff like this is way more entertaining than the hourglass. Because there's real strategy behind this. I wouldn't mind seeing it back in future seasons.

-Drea's advantage was the "Knowledge Is Power" advantage where she can ask someone if they have an idol or advantage and the person has to answer truthfully. If they say yes, then Drea gets their advantage. Xander had the perfect defense against this last season when Liana tried to steal his idol. Drea knows that Mike and Maryanne have idols. And she also knows Hai and Lindsay have the other amulets. She's absolutely loaded. We've never seen anything like this in Survivor history because there's never been so many different advantages. She should start using them soon but she simply hasn't had to. I still don't think she has a winner edit and can see her story arc being that all these advantages end up being her downfall. 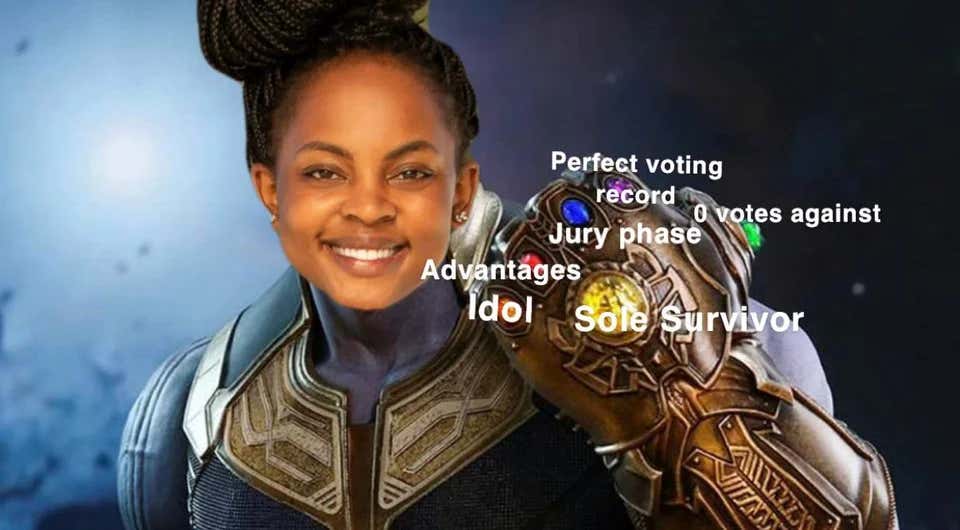 Credit to u/NoahJRoberts from the Survivor subreddit for this meme.

-This was another negotiation challenge for rice. If a certain number of people agreed to sit out of the challenge, Jeff would give the tribe enough rice for 4 days. Maryanne, Lindsay, and Drea volunteered but Jeff demanded one more. Maryanne started crying for someone else to sit out, and Omar agreed.

-The challenge itself was to use the sticks to balance the ball (not the best description but you can watch above). It came down to Tori and Jonathan, but Tori won again. It looks like she might be the true challenge beast as she's won two immunity necklaces now.

-Tori winning immunity saved herself yet again. This left Chanelle, Romeo, and Maryanne as the outsiders on the block. But Chanelle was the main target. Mike really had a vendetta against her that he wouldn't let go. This is only because she voted for him at a tribal where he also voted for her!!! It was a strange hatred that I never really understood.

-They told Chanelle the vote was on Romeo. She decided to play it cool and not freak out and hope another target emerged. I thought this was a smart move. Usually when people are on the chopping block, they scramble and panic and put an even larger target on themselves. But waiting for someone else to do this is wise.

-And sure enough, Romeo did exactly that. Rocksroy told him he heard his name and Romeo started to freak out. He told Drea she won't even look at him anymore which made them sound like an old married couple on the brink of divorce. He almost went from the decoy target to the real target as the majority alliance considered flipping the vote to him.

-Rocksroy almost passed out when he heard the vote was going to switch. Rocksroy can't handle all that. And Mike once against put his foot down and wasn't having it. He NEEDED Chanelle gone. Going into tribal, it seemed like a true toss up between Chanelle and Romeo.

-At tribal, it was revealed they everyone agreed to not vote for any of the four people who sat out of the immunity challenge. That's nice of them. I don't think I would have been that nice, but it shows there's still some friendliness in this game.

-Chanelle got sent home with a 7-3-1 vote. Mike, Hai, Jonathan, Lindsay, Romeo, Tori, and Drea voted for Chanelle. Omar, Maryanne, and Chanelle voted Romeo. Romeo voted for "Hye." I was praying that vote was from Rocksroy. I'm confused why Omar was the only one from the majority alliance to vote Romeo. Maybe he wanted to maintain the illusion that he was actually on the bottom? Only thing I can think of.