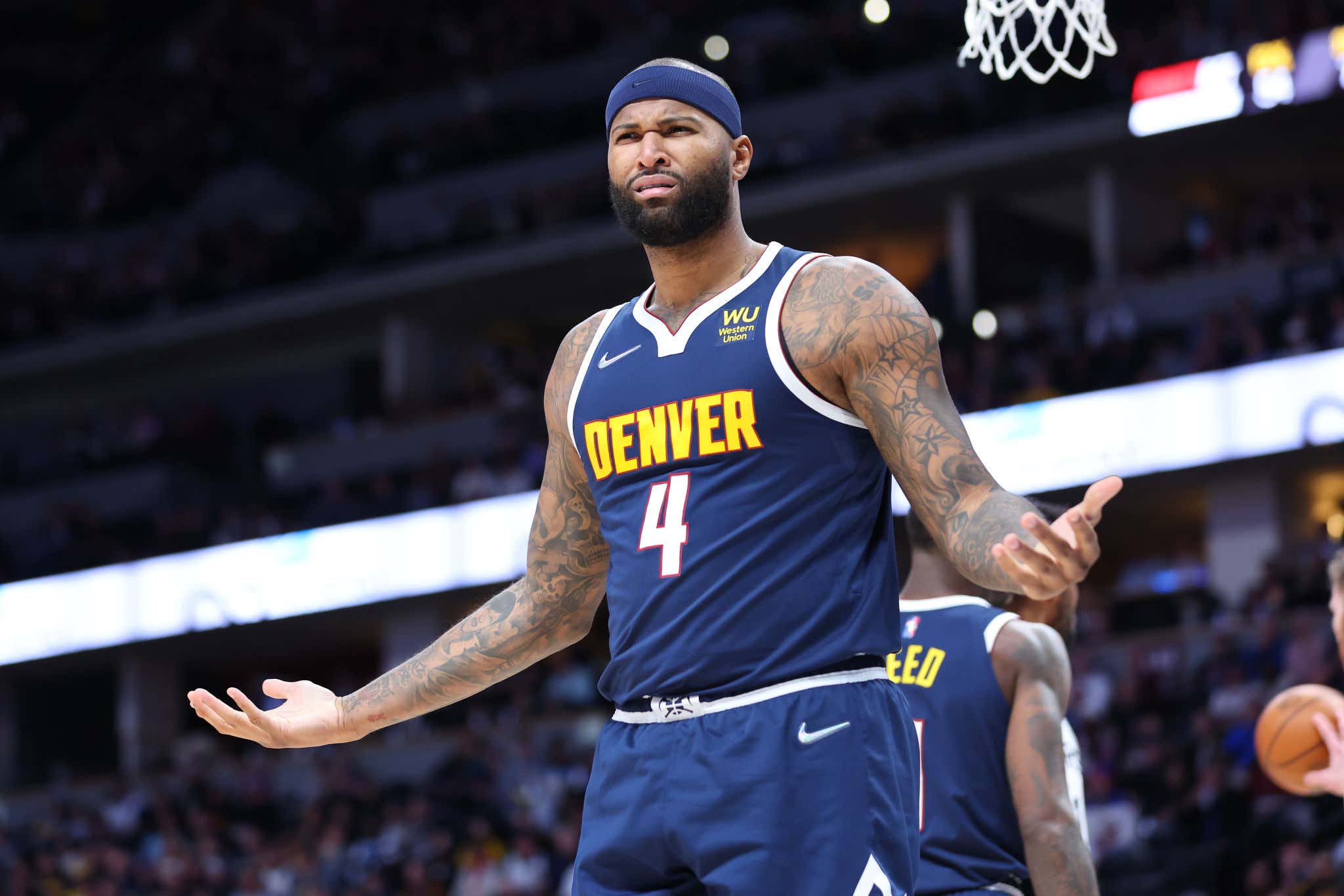 It's been QUITE the eventful 24-hour-ish news cycle for DeMarcus "Boogie" Cousins. The man is raging against the NBA machine, and is totally over it on a variety of levels.

Let's start with the most salient issue related to current events. As the inevitability of the Nuggets' Game 2 loss to the Warriors set in on Monday evening, Denver wing Will Barton apparently took issue with something Boogie said or did and had to be restrained from coming to blows with him!

I live for these types of moments. And I'm so on Boogie's side regardless of the circumstances.

Think about it. The Nuggets are without two of their best players in Michael Porter Jr. and Jamal Murray. They have an MVP center in Nikola Jokic who's an excellent passer and can elevate the play of teammates around him. He's not a perfect fit on the court with Cousins, yet if Boogie was given more of a chance, I imagine he could fare better than most of the dudes getting major minutes for Denver.

Barton attempted the second-most shots on the Nuggets' squad for the second straight game. I'm not trying to be rude, but if Barton is your No. 2 guy on offense, you're probably in trouble. You're telling me that Cousins, with his immense versatility, volume scoring ability from all areas of the court, and physicality, is a far worse option than Barton is? But oh look, Cousins got all of 12 minutes of playing time, and in that span, notched eight points, four boards, four assists and two steals.

The dizzying foul rate Cousins piles up as a reserve is due to how truncated his minutes are. He's being hyper-aggressive and playing absolutely full-tilt in an effort to prove himself and carve out a larger role. I believe he deserves it. Maybe the Nuggets view him as too much of a defensive liability. However, it's not like whatever the hell else they're trying on the Warriors has worked whatsoever. They shot nearly 55% from the field on Monday.

So yeah, if I were Boogie Cousins, I'd be pissed as hell that players like Will Barton, JaMychal Green, and even 35-year-old Jeff Green are getting way more minutes than me. I almost GUARANTEE YOU Cousins was talking shit and saying something like, "Yo let ME out there and I'll ball." Barton went 5-of-15 from the field in Game 2. Like, it's ugly RN.

I struggle to see how going back to Denver for Game 3 and playing more lineups with Jokic and Cousins at once could go over much worse than what's been done thus far. The series is probably lost for the Nuggets anyway. And Boogie could use the exposure, because once Denver is eliminated, history suggests he'll be on the hunt for a new team once again…

And now for the other Boogie news — and why he's in the right there, too

This brings me to the other headlines Cousins has been making, courtesy of a lengthy profile by Andscape's Marc J. Spears. Thankfully it's nothing unsavory off the court or anything like that, unless you count words as such. No, Cousins just had to vent a little bit about, you know, being drafted to one of the worst, most cursed franchises in all of major North American professional sports: the Sacramento Kings.

There are no falsehoods being spewed here. The slander is justified. Lack of continuity on the coaching staff. A long line of failed draft picks. Perpetual upheaval in the front office. An organizational leadership group constantly butting heads. That's how you get nonsensically-assembled rosters and nothing to show for Cousins' early years.

For some reason, one of the many Kings head coaches, George Karl, decided to put Boogie on blast for these remarks:

A not-insignificant-amount of people will likely take Karl's side on this. Fuck that. I'm not one of them. And neither should you be.

You gotta understand that Cousins is the most cursed superstar of the modern era. In January 2018, he tore his left Achilles as he was thriving amid a change of scenery in New Orleans. That cost him millions upon millions of dollars. He signed a one-year prove-it deal with Golden State, and needed extra time to get back from his injury. He then tore his quadriceps in the second game of that postseason. The following year, he signs a one-year contract with the Lakers, only to tear his ACL and miss the entire season.

That makes Karl's assertion that there's some sort of karma debt involved all the more disturbing, off-putting and problematic. But no one's really gonna focus on that, I feel like. It'll be all about that BLUE COLLAR MENTALITY la dee daaaaaa…

…Even MORE people will be like, "SEE! He's so self-delusional! Full of shit! What have you done for me LATELY, Boogie Cousins!?!"

You do realize what Cousins did as a member of the Pelicans, right? Try this on for size: 65 games, averages of 25 points, 12.7 boards, five assists, 1.6 steals and 1.5 blocks. A fantasy basketball dream. He also shot 36% from 3-point range on six attempts per night. How many bigs were jacking up treys at that rate at the time, hitting them, and beating fools in the post and off the dribble? The answer is zero.

Suddenly, after that Achilles injury, no one wanted to touch him. Cousins has always been labeled as a malcontent or someone with a bad attitude who hasn't won anything, etc…IDK, try going to Sacramento and winning anything. Cousins has had to scrap for opportunities in recent years just to play.

He's still only 31, and it'd be one thing if it was obvious that he's totally washed up. At this point, with all the wear and tear Cousins had endured from injuries, physical play and how easily he could've given up being in basketball shape as he fought for roster spots around the league, it's actually incredible how flashes of Prime Boogie resurface against all odds.

After reuniting with his former Kentucky teammate John Wall in Houston, only to see the Rockets blow up the team after the James Harden trade and tank, Cousins landed with the Clippers. He shot 53.7% from the field and 41.2% from deep in 16 regular-season games, averaging 7.8 points and 4.5 rebounds in only 12.9 minutes of action. How's that for efficiency? In the playoffs, he was deployed in seven contests, putting up 7.4 points and two boards per game in 8.3 average minutes.

No team came calling in the summer. Cousins had to wait till this November to get a shot in Milwaukee. He put up 22 and eight on Christmas Eve against the Mavericks, but was waived after 17 games. The four-time All-Star signed three 10-day contracts with the Nuggets before they decided to keep him for the remainder of this season. In a game against the Rockets in early March, Cousins put up 31 points, nine boards, four assists, three steals and a block in 24 minutes.

I know. Insert Rockets joke about how bad they are here. This did happen, though.

Did you see that spin cycle on Respectable Rockets Player Christian Wood around the 55-second mark? Are you KIDDING me?!

You're telling me that after all this bullshit — the constant upheaval in Sacramento, followed by a constant odyssey through a myriad of different NBA destinations — Cousins doesn't have a right to be a little frustrated, and vent during and around a game in which his role is bafflingly small when he could make a significant impact?

If you've abandoned the Boogie Bandwagon on the basis of any of these events or soundbites in the past 24 hours, kick rocks. I'll drive this thing till the wheels fucking fall off. This guy is a competitor who's wanted to do nothing but win and play a big role for a competent franchise. Those perfectly reasonable objectives have eluded his grasp too many times throughout his career, and somebody needs to fix this ASAP.

Nuggets coach Michael Malone was with Cousins in Sacramento, which has a lot to do with how the latter's current playing situation arose. What does Malone have to lose after two embarrassing losses to the Warriors? Let Boogie Cousins cook!!!

PS, I'm not a conspiracy theorist per say, but is it really a coincidence that Cousins was almost blacklisted from the NBA during Chris Paul's tenure as player's association president? Hell, CP3's late-career brilliance and the general basketball public's love affair with him alone should be reason enough for Cousins to get triggered.

You can appreciate CP3's greatness, respect his plant-based diet, career longevity and stone-cold ability to ball, and admit that he's a whiny little fake-ass bitch when it comes to his interactions with Boogie. It can be all those things, everywhere, all at once.

Just don't come at me with any bad Boogie takes. He's the man, and he can still play at an extremely high level when he's given the slightest sliver of an opening. Let's get our collective shit together and recognize that.