I'll be honest, I started geeking out about this show when I saw a whole bunch of alums from The Wire, which to be clear is the greatest television show of all-time, bopping around the familiar streets of Baltimore. However I slammed the brakes on that excitement and started thinking how this show would almost definitely be a lesser, parody version of The Wire since this promo was a little too cute for my liking. 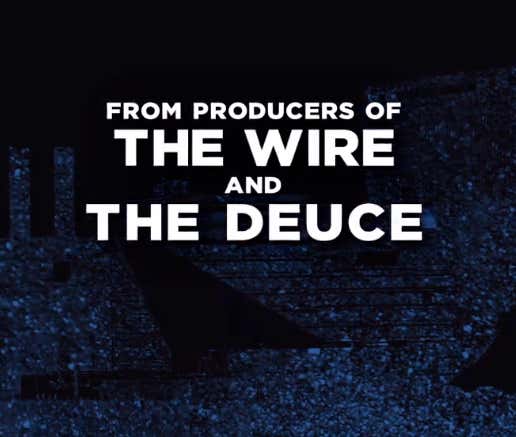 Usually when you see something like this, it's a couple of mamalukes who were kinda, sorta involved with the show instead of being the straws the stirred the drink. It would be like Barstool promoting a couple of personalities showing up to a bar and instead of getting Big Cat and Pres, you get me and Weird Haircut Seth instead.

However, I decided to get my McNulty on by opening a small bottle of Jame-o and do some deep detective work about the show, which meant I just wandered my dumbass over to the show's official site on HBO.com to see exactly who was involved and wouldn't you know, all the heavy hitters are there.

Executive produced by George Pelecanos (The Deuce) and David Simon (The Wire) -- and based on the book by Baltimore Sun reporter Justin Fenton -- We Own This City is a six-hour, limited series chronicling the rise and fall of the Baltimore Police Department's Gun Trace Task Force. It examines the corruption and moral collapse that befell an American city in which the policies of drug prohibition and mass arrest were championed at the expense of actual police work.

David Simon? CHECK. Ed Burns? CHECK. Nina K. Noble? CHECK. A show based on real life events that happened on the Baltimore streets from a Baltimore Sun reporter? CHECK. Yup, I'd say we have another motherfucking hit on our hands in a show that somehow premieres in less than two weeks along with Herc, Landsman, Dookie, Poot, Donut and any other cast members from The Wire that I missed.

Not only that, but we have Marlo doing the anti-Anakin and flipping sides in the war of the Baltimore streets. In case you need a reminder of how fucking good Jamie Hector is at his job, these videos should take care of that for you.

In fact, the only thing that gives me even a little bit of pause is that HBO is premiering this on a Monday night instead of a Sunday night, which has been their cleanup spot forever now. But again, if you have that much talent on both sides of the camera, I have no problem believing that HBO moved it there for some other reason because anytime you get the band back together that made this magic, you know you have a banger on your hands.

P.S. I have to admit that I thought the lead actor was the guy who played Spiros AKA The Greek's sidekick in The Wire before realizing he'd be way too old. I looked it up and found out it's actually Brad from Wolf of Wall Street, who is an all-time great knucklehead character.

we own this city+ 4 Tags