Here's the thing about Rob Gronkowski making this joke on Jimmy Kimmel. When you do an interview with anyone, or guest on their podcast, or take the stage for a conversation, there's an overriding element of the need for you to be "on." I'm sure it's especially true when you're invited on a late night talk show. You're there for witty banter and mention whatever you're there to plug. And I've heard enough show business people talk about the pressure to kill every time out, no matter how many times you've been on to know it's real.

And ever since he first created the Gronk character, Gronkowski has been under a certain obligation to deliver that guy. The goofy, fun-lovin' party animal. No one invites him on to talk about how he's settled down in his personal life. And deep dives into his Tampa career aren't going to keep the eyeballs of people who tune into Kimmel for his Trump jokes on the screen. So when Gronk sees an opening for a laugh at his old team's expense, he's going to take it. That's the job.

Yet here's the thing with Patriots fans. It's not like we don't have a sense of humor. It's just that we've been in such an abusive relationship with the rest of the country for so long, that there's a visceral reaction to this kind of dig. Massholes and other New Englanders have been Defending the Wall against charges of spying, cheating, arrogance, rules bending, harboring a murderer, spying again, taking all the fun out of football, and yes, being cheap, that they're not going to stop and ask themselves if the joke was funny or not. They're just conditioned to ...

OK, not exactly. The first reaction is to take to Twitter and deliver the cold, hard slap of truth. To set the record straight about how "cheap" the Kraft-Belichick Dynasty really is: 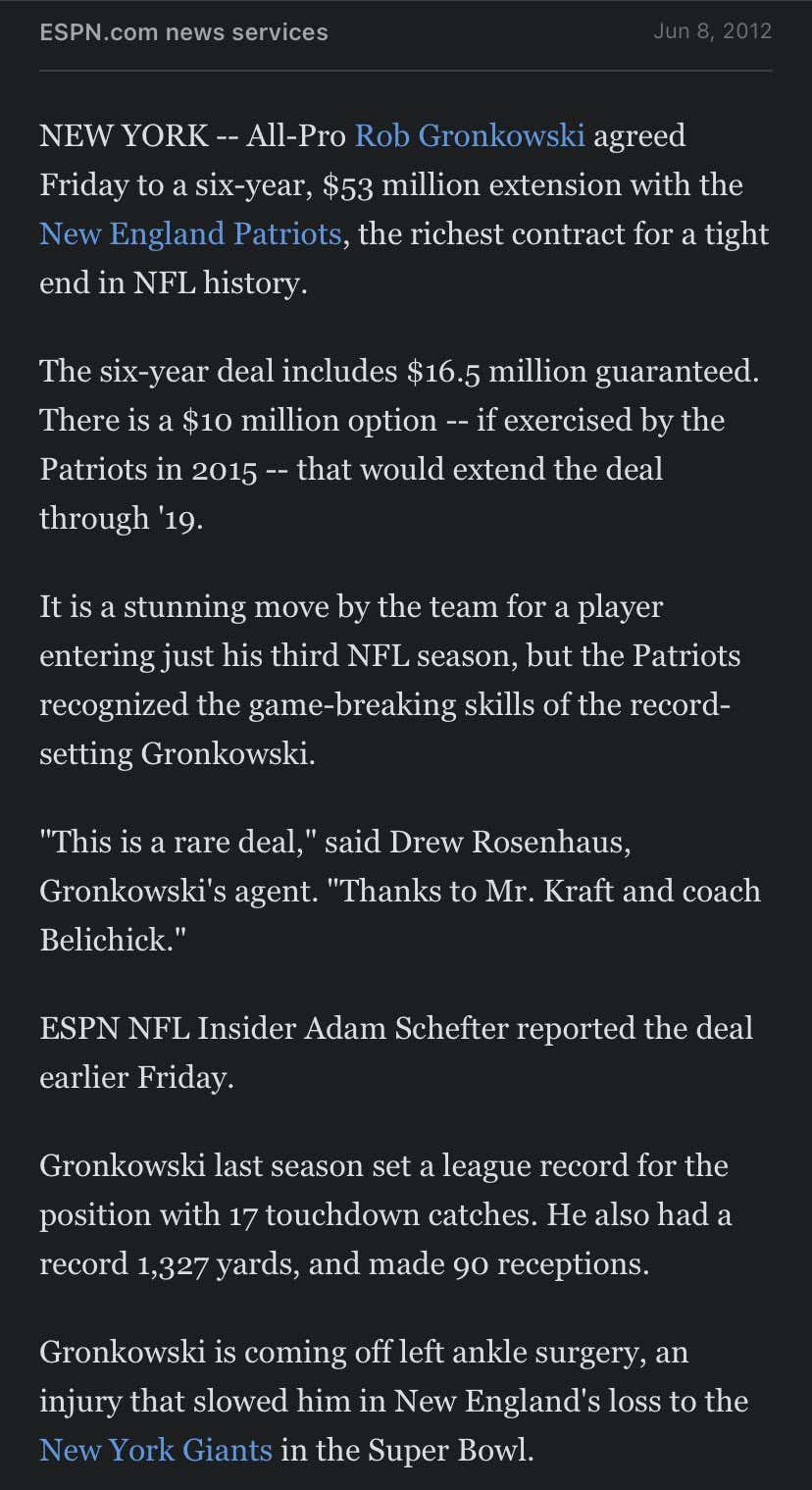 And on rare occasions, with an assist from national media types, that get ReTweeted by the thousands:

And just for the record, I'll add that at various times, this ownership has handed out the biggest contracts:

But not everyone takes to the socials armed with the terrible swift sword of facts. Some just prefer the path of least resistance. The sweet, satisfying intoxication of straight up ad hominem attacks:

Then of course, there's the classic Masshole tactic of turning the tables. Because if there's one thing we've discovered over the years, that there are no NFL franchises that are pure as Caesar's wife. Whatever the Patriots get accused of, other teams have been caught doing. Usually much worse:

Again, while you can accuse the pale, angry, Dunks-guzzling, sun-deprived, Scally-wearing inebriates I call friends and neighbors of not being able to take a joke, look at from their perspective. This is what sets us apart from every other fanbase in every other sport. No one else has had to spend 20+ years screaming into the void the way we have. It's what's made this the most engaged, plugged in, tech-savvy collections of miscreants on the internet. Someone cracks wise against this team, and there's an army of monkeys prepared to fly out of the witches castle and rip the straw out of their chests.

Not that the facts stop the attacks from coming:

It's not about being soft. It's about standing your ground and defending this franchise to the death. Even if the attack is coming from one of the best Patriots of all time. Even if it's just said to get a cheap laugh out of an LA audience. But that's who we are, for better or worse. We didn't make ourselves like this. The world did.