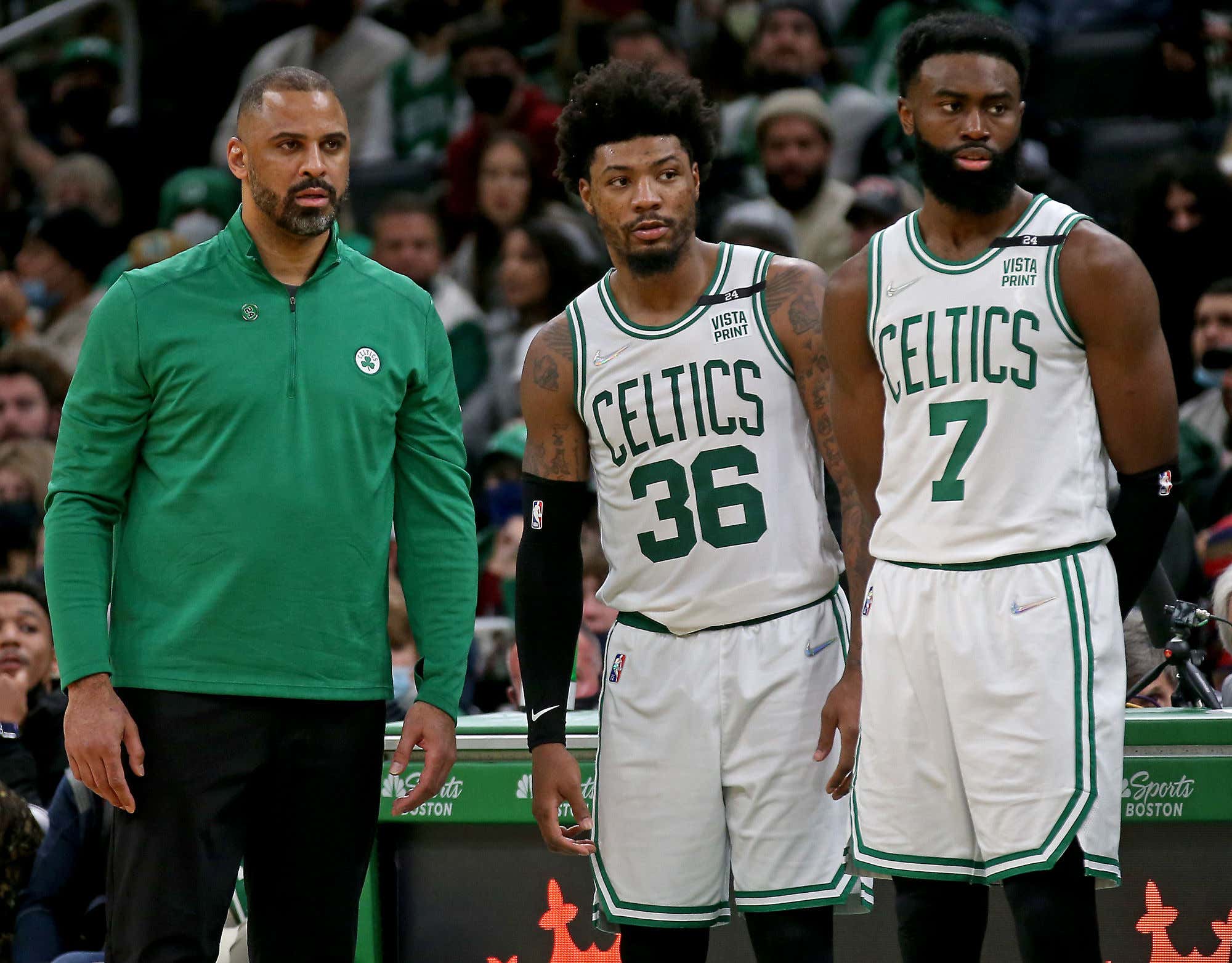 Ever since the clock his 0.0 last night this has been on my mind. I chance my opinion on it maybe every 5 seconds and I don't see that stopping anytime soon or at least until we get the final injury report for tonight's back to back against the Bucks. Right now, this is the biggest question regarding the Boston Celtics

What the hell should they do to close out the season?

Rest and let the chips fall where they may? Finish strong to try and finish as high as possible and what you get is what you get? It's a question without a clear answer really. Let's say you're someone who cares about these two things

2. Avoiding any potential headache that might come up playing Toronto

I wouldn't call you crazy for either of those concerns. This is why it's such a complicated issue. Let's look at how things sit as we enter tonight's games 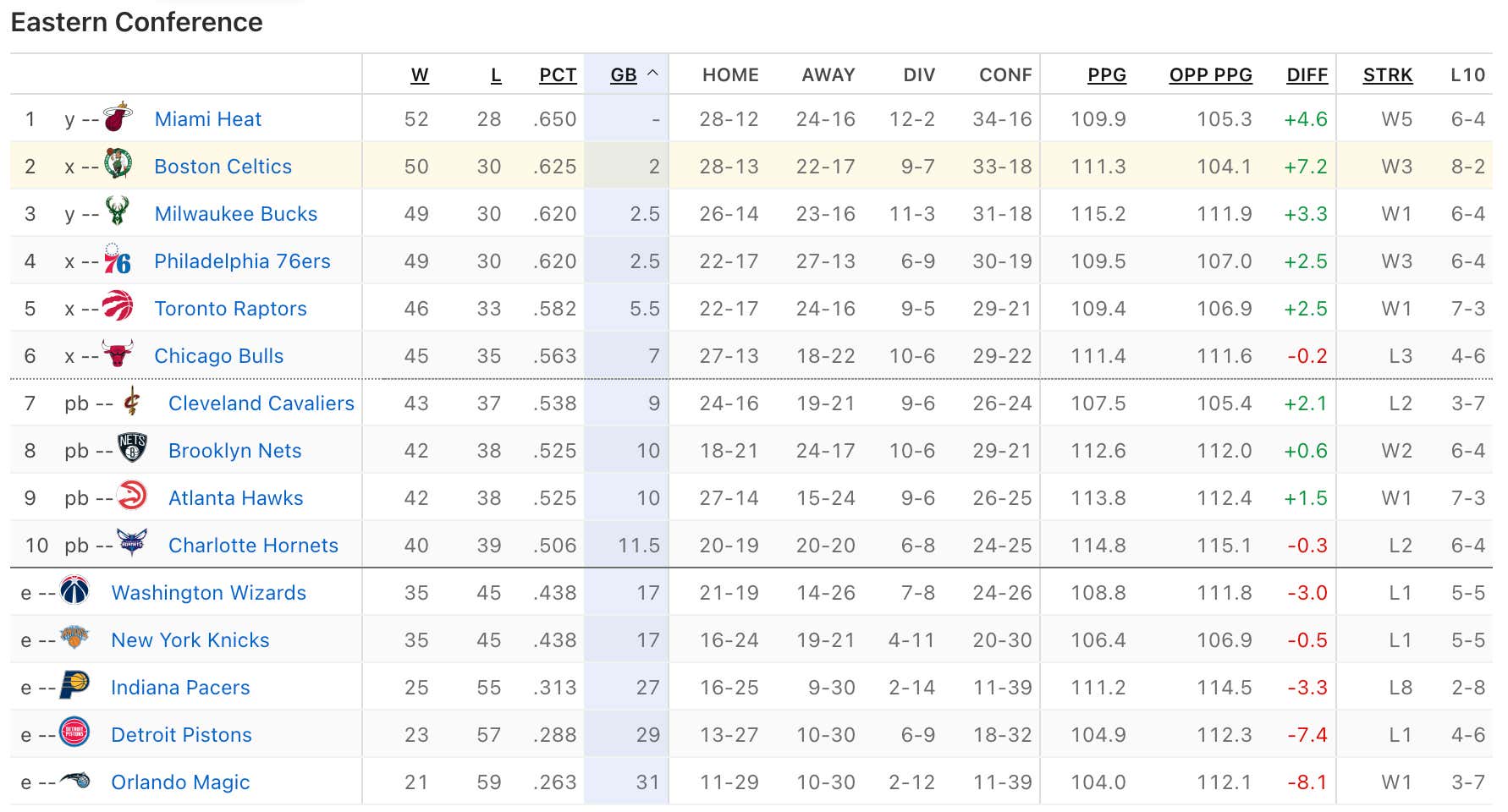 and here are the remaining schedules for MIA/BOS/MIL/PHI

Here's the deal. The #1 seed is still mathematically in play for the Celts. If they win out and MIA loses their games, the Celts take over #1 spot and you avoid both of those two concerns above. You can't do that unless you try tonight against MIL. Unfortunately, MIA/ATL play tomorrow, so that's why it wouldn't surprise me to see the Celts still go for a win tonight. As long as that path still exists, we've seen they are going to strive for it. If MIA wins on Friday then the #1 seed is out and you can rest in the MEM game.

Given that both Giannis and Embiid are going for their MVP, I think it's more likely we see the Sixers go for all 3 wins to help Embiid's case. If he's dominant and they go 3-0, that makes a very compelling case for his MVP if the Sixers were to finish with the highest seed. It's obvious how much he and the team care about that, so I doubt he'll be sitting down the stretch. You could make the same case for Giannis, but because he already has MVPs and a ring, I could see them caring more about positioning. Where it gets tricky is if the Celts drop both of their final 2 games, you then need both MIL/PHI to lose 2 of their final 3 or you run the risk of finishing 4th. Not only does that give you a harder opponent, there's also the availability concern that NONE of us have any true idea about. I think that's a little unrealistic and I don't love the idea of not controlling your own destiny. If the Celts go 1-1 and MIL/PHI goes 2-1, the Celts will end up in the 2 and most likely have that BKN team to deal with.

You can see why this is so hard to map.

Next comes the question of what do Ime/Brad prefer. Do they value the 3 seed which would give them a potentially better first round opponent in CHI or do they prefer to have home court advantage in any potential 2nd round with MIL. To get that homecourt against MIL, that would mean you have to play BKN in round 1. That's quite the pickle. My guess would be they feel confident going on the road in MIL in Round 2 with Rob back, but let's not pretend like that's a given. More often than not, you are the one that wants homecourt the deeper you get into the playoffs. Also, let's say there's an upset and the Heat lose, you then could have homecourt all the way through the ECF should you be lucky to get there. Looking over to the West, if PHX or MEM somehow don't make the Finals and the Celts do, you could start to think about homecourt for the entire playoffs. That's obviously a stretch but I bet Brad/Ime are looking at every possible scenario.

There is a world where we could see the Celts strive to win and things still break in their favor. If my math is right, and there's a 65% chance it isn't, if the Celts win tonight but lose against MEM and PHI wins out, the seeding would shake out

In that instance, you avoid both of your potential concerns. When it comes to the 2nd round, if BKN were to beat PHI, you would still have homecourt in the second round. That might be the best overall scenario, but you're also hoping the Sixers care more about Embiid's MVP than playoff positioning.

All in all, I have no fucking idea what they are going to do or even what I really want them to do. The only thing I can say for sure is I just want health. Give me full health and I like my chances no matter what the draw is. Check ball and let's see how it all shakes out.

The injury report for today is out. To me, this says they are going for it tonight while giving guys some normal rest. As long as the #1 seed is in play, the Celts will go for wins. Now let's just see if they can pull it off.