The pre-merge portion of Survivor 42 is just about wrapped up. We're five episodes in with 12 players to go and a two-hour sort of merge episode next week. We have exactly four players left on all three tribes which should set up for a pretty chaotic merge. And the pre-merge has been solid. Way better than 41 and I think there's a lot of promise for the merge too with all the advantages at play which could lead to some insane tribal councils. Last night's episode was solid and had its moments, and I think it serves as a good set-up for the merge stage with all the idols being activated.

I'll get into the written recap below but make sure you're also subscribed to the podcast on Apple and Spotify. Please leave us a nice 5-star review while you're at it! And our full episodes are now also on YouTube. We had the full crew together for the first time this season.

We recapped the episode, debated Omar's winning chances, sucked off Jonathan, talked about annoying Maryanne, and for bonus points Nate and Glenny yelled at each other a little bit.

You'll have to watch to see the full fight! Clickbait! Now onto the blog recap…

-We joined them after the Swati vote which left only Rocksroy blindsided. He admitted that his social game is not so good and he probably needs to work on that. Some self-awareness points for Rocksroy, who still has a 0% chance of winning the game.

-I was really impressed with Romeo here. Rocksroy asked him why Swati got voted out, and Romeo gave a calm, legitimate explanation about how Swati was going around telling everyone they were her #1 and she thus wasn't trustworthy. And Rocksroy didn't leave mad at Romeo or anything. Being able to blindside someone's ally, explaining it to them, and then not losing their trust is a huge winner quality. He's a top-tier winner pick.

-For someone who claims to not be a mean girl, Tori has some real mean girl tendencies. She said how she hates Rocksroy and can't wait to flip on them at the merge. She accused Rocksroy of only "building the shelter and tending to the fire" but those are like two pretty key parts of survival so maybe she should be a liiitle more appreciative. I think she is going to play a chaotic merge game and burn a lot of bridges, maybe like a Kass. She also has no chance to win.

-Drea found herself another advantage. Her and Romeo went looking for the idol which still hadn't been found at this camp, and she got the Beware Advantage. She didn't hesitate at all and took the risk. She also has the extra vote and the amulet advantage. So she's armed and dangerous right now. But it's not often the frontrunner collecting all these early advantages actually wins the game. Someone in our Twitter Survivor community (JOIN HERE) brought up a good comparison from last season. "Drea is Shan 2.0, complete with the gay sidekick whose actually better at the game" (referring to Ricard and Romeo). I like Romeo's chances better long term.

-Her secret idol phrase was something like "Potatoes have skin. I have skin. Am I potato?"

-The story of this tribe was Maryanne still being the most annoying Survivor contest in years. Her and Lindsay were non-stop talking in the shelter, and Jonathan was getting annoyed. Then when Jonathan went to go chop a fish, Maryanne for some reason decided to put her foot right there and then yell and scream that Jonathan almost chopped her foot off????? So bizarre. I don't understand the mental gymnastics Survivor fans are doing to stan her as some queen. The Survivor Reddit is obsessed with her. It's like they have to pick out the worst contestants and convince themselves they're awesome. Maryanne is straight up annoying. I'm sure she's not a bad person outside the game, but she is clearly an annoying player to have on your tribe. It's just bad gameplay to be that annoying and talkative when everyone is starving and tired on a deserted island.

-Jonathan had enough but knew he had to keep his cool. He realized how bad it would look if the big, muscular God yelled at the young, sweet girl. Great social awareness there from Jonathan that we haven't always seen from other big meathead, jock players. There's more to him than initially meets the eye. He'll have to avoid the massive target on his back at the merge, but his social and strategic game may be strong enough to help him last even when doesn't win a challenge.

-Daniel really might go down as one of the worst Survivor players in a long time. It became entertaining though in just how bad he was. Despite telling everyone he had a bad shoulder and sitting out challenges, he went spearfishing for hours. Everyone on the tribe had a moment of like "Hmm.. wait a minute now."

Guy just couldn't get out of his own way.

-Mike was deciding if he'd activate his idol or not should someone from blue say their secret phrase. The advantage to not doing it before the merge is nobody would know he had an idol. But the advantage to doing it was getting his vote back in case he needed it at tribal.

-It became clear that Hai and Lydia went from the bottom to a power position. Daniel and Chanelle were the two on the chopping block now that Mike, Hai, and Lydia were a trio. Great job by Hai to work himself to the top of his tribe after being blindsided at the Jenny tribal. He's a very good player with a serious chance of winning.

-Before the challenge, it was idol activation time. Maryanne started by saying her rabbit thing after once again being totally shocked that a person she's never met got voted off Survivor. It's like she forgets there's a tribal council every week. Drea then joined in with her potato line. But in it she mentioned that her tribe had a potato, and it left me wondering if anyone on the other tribes were thinking, "Wait what the fuck how did that tribe get a potato? We're starving over here." And after some hesitation, Mike then said his line about soccer too, officially activating all three idols and giving them their votes back. I can see why people think this secret phrase thing is cringey, but it was a little funny at points. I can't imagine we'll ever see it back on another season.

-The story of the challenge itself was once again Jonathan. After Omar put their tribe in a huge hole, Jonathan was back on his Superman shit. He single-handedly won them the challenge with his pinpoint slingshot accuracy. There's truly nothing the man can't do. We'll see how he performs in individual challenges before putting him up there with Ozzy and Joe, but he's probably the most dominant pre-merge challenge performer the show has ever seen.

-Blue finished in first to win a large tarp. Orange came in second for a smaller tarp. And green was headed to tribal. Lydia and Rocksroy got sent to Advantage Island.

Advantage Island (or whatever it's called)

-I would pay a premium to see the full three hour journey between Lydia and Rocksroy. Two polar opposite humans. I'd love to see what the hell they talked about the whole time. It seemed like both just played it super close to the vest and didn't want to give out any info about their respective tribes.

-It was once again the prisoner's dilemma with the ability to risk their vote for an extra vote or protect it. For the first time this season, both players chose to protect their votes. It made sense for Lydia to protect it because she needed her vote in a pivotal tribal council that night. And Rocksroy is just the ultimate protect your vote guy there is.

-It was clear that Daniel or Chanelle would be going home. It was a matter of who could be trusted more heading into the merge. And they wanted to make sure both felt safe enough to not play their Shot In The Dark. Crazy how much more of a thing that's been this season as opposed to everyone seemingly forgetting about in 41.

-It seemed like Daniel and Chanelle would vote for each other. Mike would vote for Daniel based on what he told Chanelle at the well and how much he hated Daniel. And then Hai and Lydia would be the swing votes.

-Daniel was throwing some last minute Hail Mary's by buttering Mike up at tribal and saying how he knows Mike will consider everyone from this tribe a friend for life. That's probably true, and Mike said it himself. Mike will definitely look at these people as family for the rest of his life. That's just the Mike way. But Chanelle called Daniel's suck up ways out. I did like Daniel's analogy about how Muhammad Ali wasn't punching people in the streets the same way Survivor players aren't always lying back in the real world. It was the first good analogy he's made all season. And I will miss his self-deprecating ways. 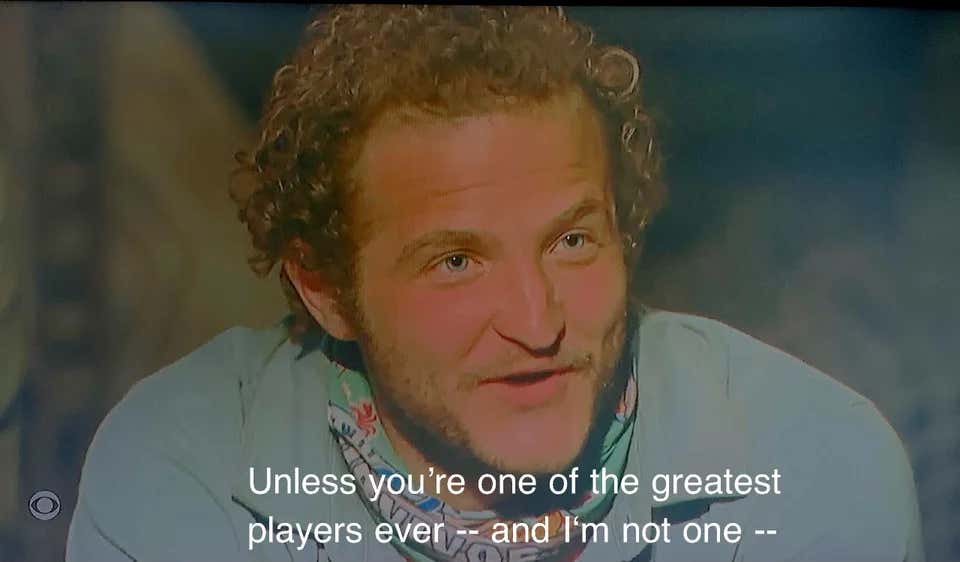 -But Daniel couldn't do enough to save himself. The initial vote was 2 on Daniel. 2 on Chanelle. 1 on Mike. And then Daniel went home unanimously in the revote. A little confusing but Hai and Lydia voted for Daniel. Daniel and Mike voted for Chanelle. And Chanelle voted for Mike.

-I actually understand Chanelle's vote. She was protecting against Daniel successfully playing the Shot in the Dark. If there were 4 votes on Daniel and he was safe without a vote, there would've been a revote where Chanelle presumably would've gone home. So she was protecting against that scenario which was wise. The vote that confused me more was Mike voting for Chanelle. He claimed to keep his word right after tribal ended, but that was obviously a lie to save himself. I assumed him, Hai, and Lydia all agreed to vote together on Daniel. But maybe he was also protecting himself in case of Daniel's Shot in the Dark? And he thought Chanelle might vote Mike as she did??? So it was a backup plan to Chanelle's backup plan???? If so, I guess that's pretty genius. Would've liked further explanation though.

-And so we say farewell to Daniel. He'll be remembered for how bad he was at Survivor and some quotes he gave along the way. Have to think this might hurt his law career. If I showed up to court and saw Daniel was defending me, I'd just send myself straight to jail.

-We saw on the teaser that next week is a two-hour episode and a "not exactly" merge like last season. Let's pray that it's not the stupid hourglass twist again. Hopefully Danny almost murdering Jeff on the island scared him off enough from ever doing it again. But I do expect to see some other kind of twist just based on the fact that it's two hours. I am excited for the merge portion of the game. 4 players from each tribe. 2 men and 2 women on each one. It's as even as it gets. The tribes are kind of strong together but also kind of not? There's cracks. Will two tribes just join together to take out another? Or will fragments of all three tribes come together to form a majority alliance. Will be very interesting to see how it plays out. And don't forget the extra votes, idols, and amulet advantages.