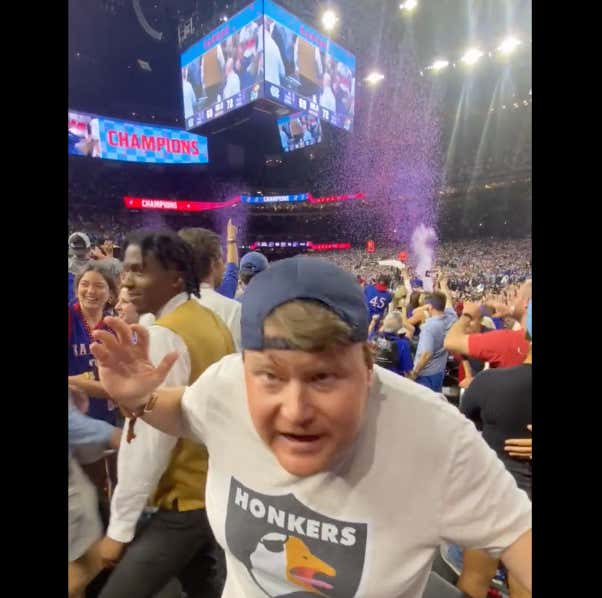 There's no denying I am a lucky dude. I have experienced almost all of the major sporting events live in my 38 years on earth that I could ever hope for. Until Monday night in New Orleans, there was one I still lacked…. the national championship basketball game.

I went to the Final Four in 2003 in New Orleans as a sophomore in college and sat in the nosebleeds watching Kansas massacre Dwyane Wade's Marquette Golden Eagles. Carmelo Anthony led Syracuse to a close win over TJ Ford's Texas Longhorns that night as I sat so high that the players looked like ants running around the basketball court. Ironically, I skipped the national title game that Monday night because I had a Chemistry test. Considering how my Ole Miss academic career turned out, I wish I had gone to the game to see Carmelo hoist the title.

Fast forward 19 years later and the Final Four was back in New Orleans. I was not available to go Saturday night because of my commitment to Hogs For the Cause (Raised $50,000 for families fighting child cancer!). The man behind the Barstool NOLA Twitter account hooked me up with a free upper deck ticket for the title game Monday night and off we went.

Barstool Live had great turnouts at Walk On's Sports Bar across from the SuperDome on both Friday and Monday afternoons. The "Mintzy" chants were everywhere and I even got to join Dave Portnoy, Big Cat & Rico on stage! Thanks to Raising Cane's and High Noon for sponsoring the shows as well.

After the Monday show, I hit up the Annheiser Busch tailgate on the 5th floor of Benson Tower overlooking Trombone Shorty playing on Champions Square before the game.

After enjoying prime rib and shrimp & grits, we headed into the SuperDome. Despite being in the upper deck, we had a pretty dang good view.

I LOVED the New Orleans rendition of national anthem by Preservation Hall Jazz Band and Tank & The Bangas. There's nowhere better than New Orleans for hosting major events. I wish the Final Four and Super Bowl could be there every other year. While the SuperDome may not the be the most state of the art venue, it still rocks and its proximity to the French Quarter is impossible to beat.

After Kansas jumped out to an early 7-0 lead, North Carolina dominated the 1st half as Kansas went ice cold shooting. The Tar Heels led 40-25 at the half.

At halftime, I got a text from my two Ole Miss college buddies who were sitting in Section 111 behind the Kansas bench that two seats next to them were open so off I went on the old bait and switch.

We were right in the heart of the Kansas section for the 2nd half comeback and it was bananas. Paul Pierce, the Morris twins and Drew Gooden were a few rows in front. Despite the fact I had UNC in the game, it was still badass to be in the middle of the Jayhawk faithful as they pulled the biggest comeback in the history of the national title game. The energy was on out of control the entire last 20 minutes.

Ultimately Kansas won 72-69 in a thriller after UNC missed a late 3 to tie the game.I was mesmerized the entire 2nd half and just felt overwhelmingly grateful that I got to experience such an amazing title game in my favorite city in the world.

And let's be honest UNC covering the 4 did not suck either….

This video went off online because it looked like a talking GIF. My phone was on 3% and the SuperDome Wifii was shaky which caused it. In true Barstool fashion, I embraced it and watched the views pile up.

Jeff D Lowe even chimed in with a funny black and white take on it.

I will be back tomorrow with a recap of such a special weekend at Hogs For The Cause for Team Porknoy in its debut.

We talked more about the video, Hogs, and the Mintzy Tour on this week's episode of Cracking Aces. 'Preciate yall if you give it a listen, the fellas talking poker and having a good time every week!