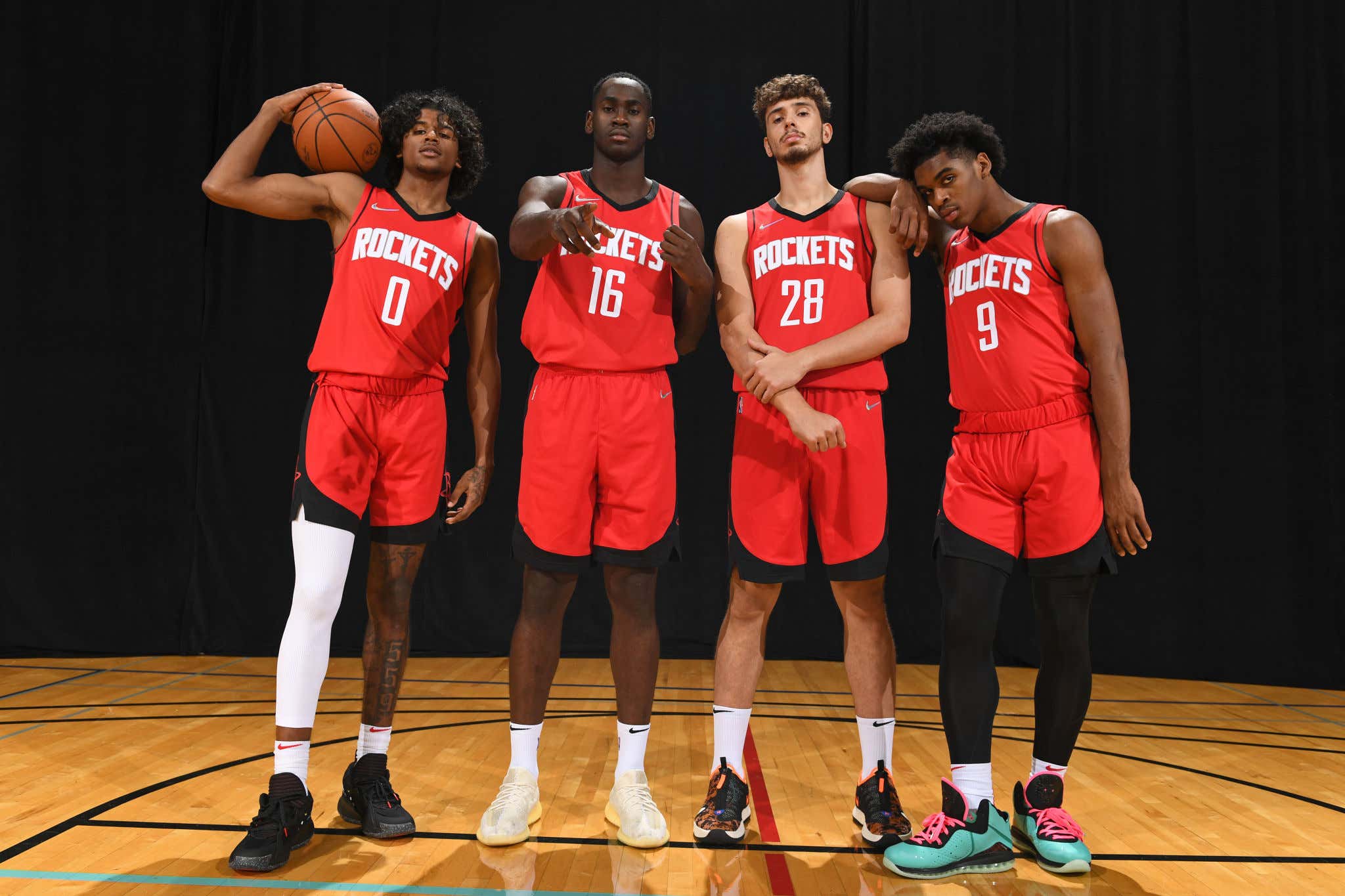 Then there's a team like the Rockets. By all accounts, their record is horrendous. An NBA worst 20-60 as of this morning. Their offense ranks 27th in the league, their defense ranks 30th, and their net rating comes in at a stellar -8.2 which would also be 30th in the NBA. Taking all that into account what I'm going to say next might not make a whole lot of sense, but it's sneaky true.

The Rockets are nailing their rebuild.

Remember the James Harden trade? Initially, a lot of people killed the Rockets for their return. There was talk about how they fumbled this prime opportunity to reload. Maybe it was a little confusing how they didn't want Jarrett Allen, or how they traded Caris LeVert for Oladipo only to then trade Oladipo to the Heat at the deadline which also unloaded Kelly Olynyk to the Pistons. It was clear that the Rockets didn't give a shit about any of those players, they wanted picks. Why would you want players on your roster that could help you potentially win games and ruin your lottery odds? Now they're sitting pretty with a top 3 pick which seems pretty valuable right now. Then you look at what's in the rest of their treasure chest 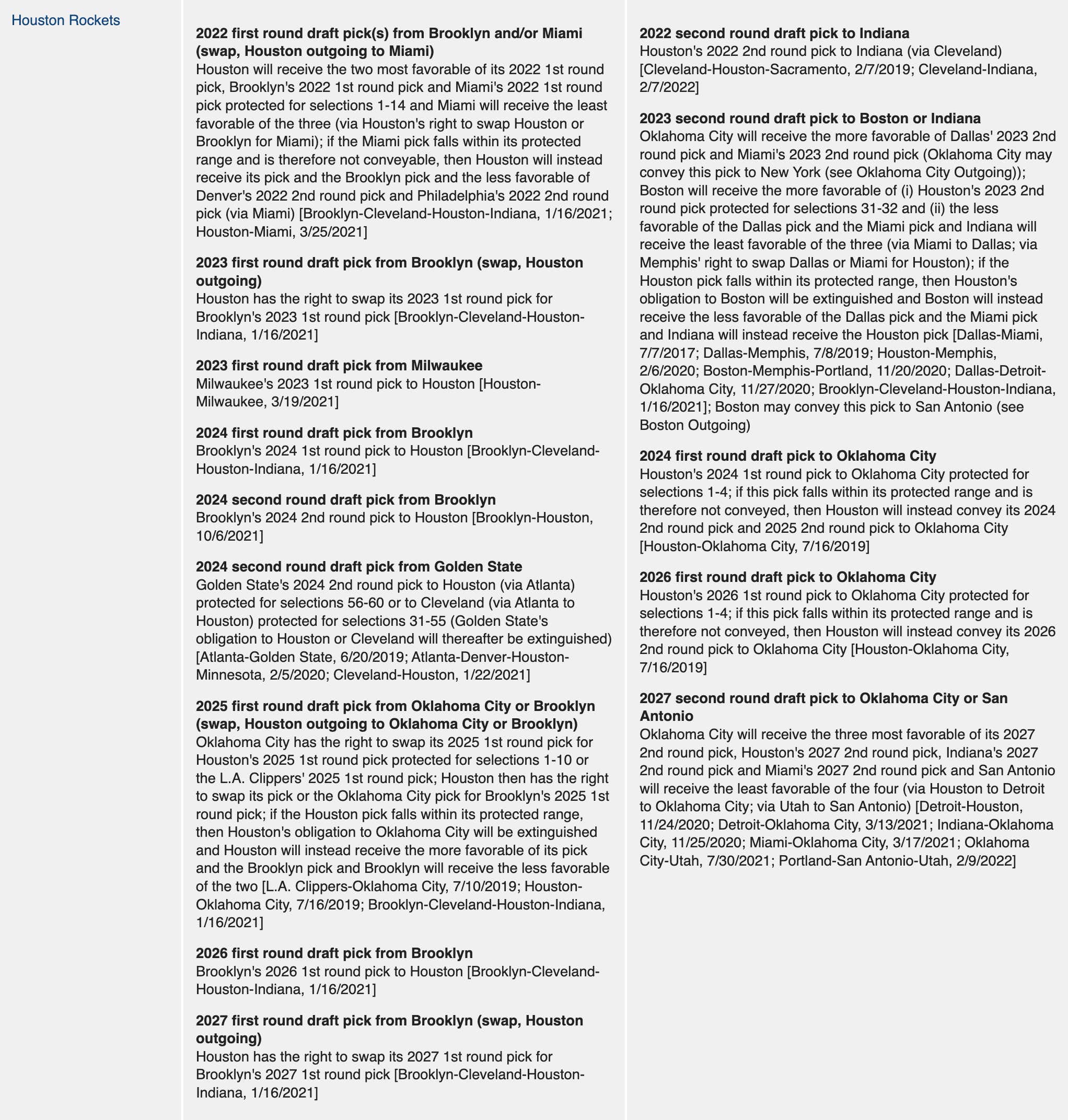 There's a chance the Nets miss the playoffs this year and end up on the Lottery. Who knows, maybe they get some "lottery luck" and that's a top 10 pick. Guess where it's going? How do you feel about the 2026-27 Nets? If an opportunity comes up where the Rockets can bring in some win now players to further their rebuild, they have the ammo to do it. That's an important step for any rebuilding franchise. You want to be able to have a seat at the trade table, but to do that you need picks/assets that other teams might want. Check.

The more important part of their rebuild though is something we've seen the Grizzlies, Cavs, Wolves, and Pistons really nail recently. You have to hit on your picks. Nobody is willing to go to Houston right now in free agency given where they are in their rebuild, so it's imperative that you nail the draft. How's this look?

KPJ isn't a draft pick but he is a young player that the Rockets took a chance on so just go with it. The beauty of this rebuild for the Rockets is it's not just the fairly obvious draft hit of Green that stands out. You can also count the Sengun pick as a hit as well. Look at what this man is capable of!

Once they finally moved him into a starting role, Sengun responded with 11.9/8.9/3.3 on 45.5% shooting. He's 19 years old yet has the passing skills of a big whose been in the league for 10+ years. The Rockets identified him as a piece and knew OKC would be willing to give him up for some assets and I don't think any Rockets fan is complaining right now about paying that price (DET and WSH 1sts). Sengun looks to be every bit of what we heard about him at the draft, and you never really know when it comes to these international guys. If he's this good at 19, imagine what he's doing at like 23 or even sooner once he gets normal and consistent run?

Successful rebuilds also don't always happen in the lottery. Sometimes you need to also hit your end of the first round picks. Those are the value selections that can really speed things up. We see it all over the league right now with teams that are nailing their rebuild. The Grizzlies hitting on Clarke and Bane is a great example of what that can do. Well, that looks to be the case with the Rockets and Josh Christopher. Granted I already loved the guy given he's a fellow Sun Devil, but he's showing flashes in his rookie season as well

He can absolutely be that two way guy who is tough as nails, and gives you that energy that every good team has.

We haven't even really seen Usman Garuba yet either but he projects to be as legit a defender as you'll find at his position.

Here's the thing too. It's not just their most recent class either. Guys like Jae-Sean Tate are showing to be great low cost assets that can actually play. He's only 26 and is basically coming off back to back seasons of 11/5/3 on 50% shooting as a 6'4 starting wing. Kenyon Martin Jr is another Year 2 guy who is only 21 years old and is a more than serviceable reserve big off the bench who can give you around 10/5 on over 50% shooting. These last two seasons the Rockets have done a very good job at finding young talent that can play at this level. That's huge.

Then there's the final piece of this puzzle. The Rockets have veteran players on their roster who most likely aren't part of their future but definitely have a market around the league. They can be flipped either for additional assets or potentially some other players who help address their needs. Guys like Eric Gordon and Christian Wood don't make crazy money and could easily be moved if the right deal presents itself. I won't count John Wall for this exercise given his contract but you could if you wanted. Again, the important thing about a rebuild is you want to be able to improve in a wide variety of ways. Having mid level money contracts at the wing/big man spot along with 1st round picks usually brings back something valuable.

This isn't me saying that the Rockets will suddenly win 40 games next year and be in the play in/top 8 conversation. You saw where this group ranks in every category that matters, it's brutal. They have a long way to go. But that's not really the point. The point is for a team that many thought didn't have a plan when they traded James Harden actually did have a plan and they are pulling it off pretty damn well. Also, we've seen just this season how quickly things can change from one year to the next. Once the Rockets get good again, the free agents will come. History has shown us that. If you can get to that point with guys who are all on rookie deals, that allows you to spend big when that opportunity presents itself.

Time will obviously tell if this all works out, but if you look throughout history at the teams that saw their rebuilds actually become successful, it all starts with building a solid foundation. After looking around, that is exactly what the Rockets appear to have done.