What an absolute slobberknocker we had last night in match 189 of The Dozen. It was scheduled to be two brand new teams with the Booze Ponies (top 2 logo and name) with Will Compton, Chef Donny, and Dana Beers taking on the Foreplay boys live from Augusta. Heavy weight fight between 2 rookie teams. I got a DM from commissioner Jeff D. Lowe on Monday afternoon asking me if I could fill in for Will due to he and his wife having their beautiful baby girl that morning. Of course I said yes, I set my nighttime schedule around The Dozen and after playing last week with The Misfits I was itching to get another shot. Said I was good to go and we were off. I don't think anyone expected it but this turned into a top 5 Dozen match of all time, give it a watch if you don't believe it. This match really did have it all.

A hot start thanks to some baseball questions that went our way, a pretty easy music question and thanks to Dana pulling a Kirk on his niche category we were tied, 6-6, heading to the bonus round. It took us 2 guesses too long to figure out how to attack the question but it was too late, the Booze Ponies were in a hole and it wasn't looking good. That is when everyone in the game kicked their game up a notch. BP was able to stay within striking distance even after the Foreplay swept the movies category. More back and forth after the NFL question kept us down only 1 heading into round 11. Chain Restaurants was the question and when I saw the question pop up I almost lost it. 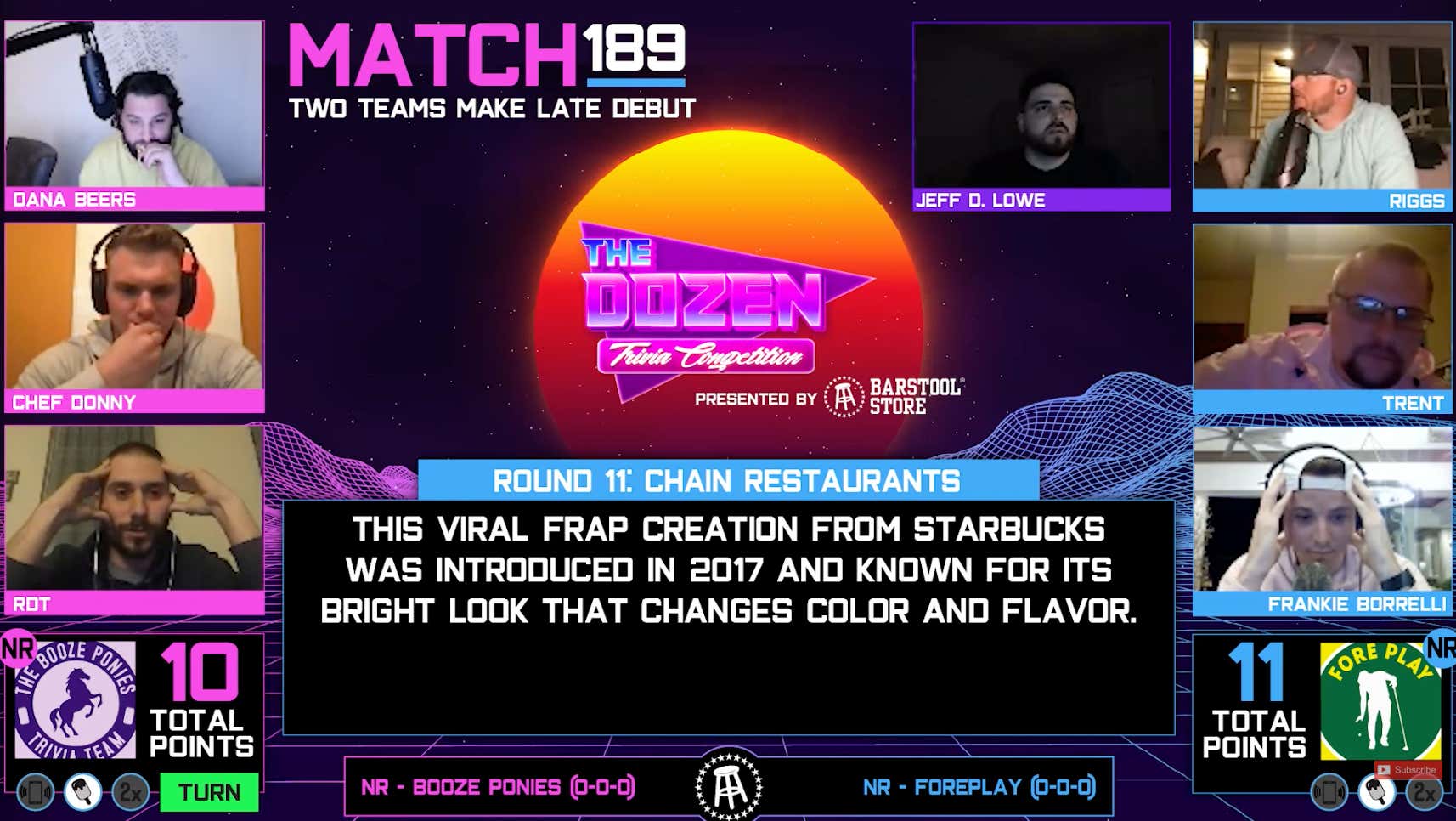 Frankie and I both knew something was about to go down. All I could think about was that fucking bright pink and blue drink from Starbucks that everyone and their mother posted on IG and their story. I knew that is what it was, it had to be. I'm not a coffee person. Don't think I've ever stepped foot inside of a Starbucks, I have no reason to. But I was certain this was it. I tried to talk myself into saying it because I didn't want to give FP a layup by butchering the name, but I decided to shoot my shot and go with what I had floating around in my mind. 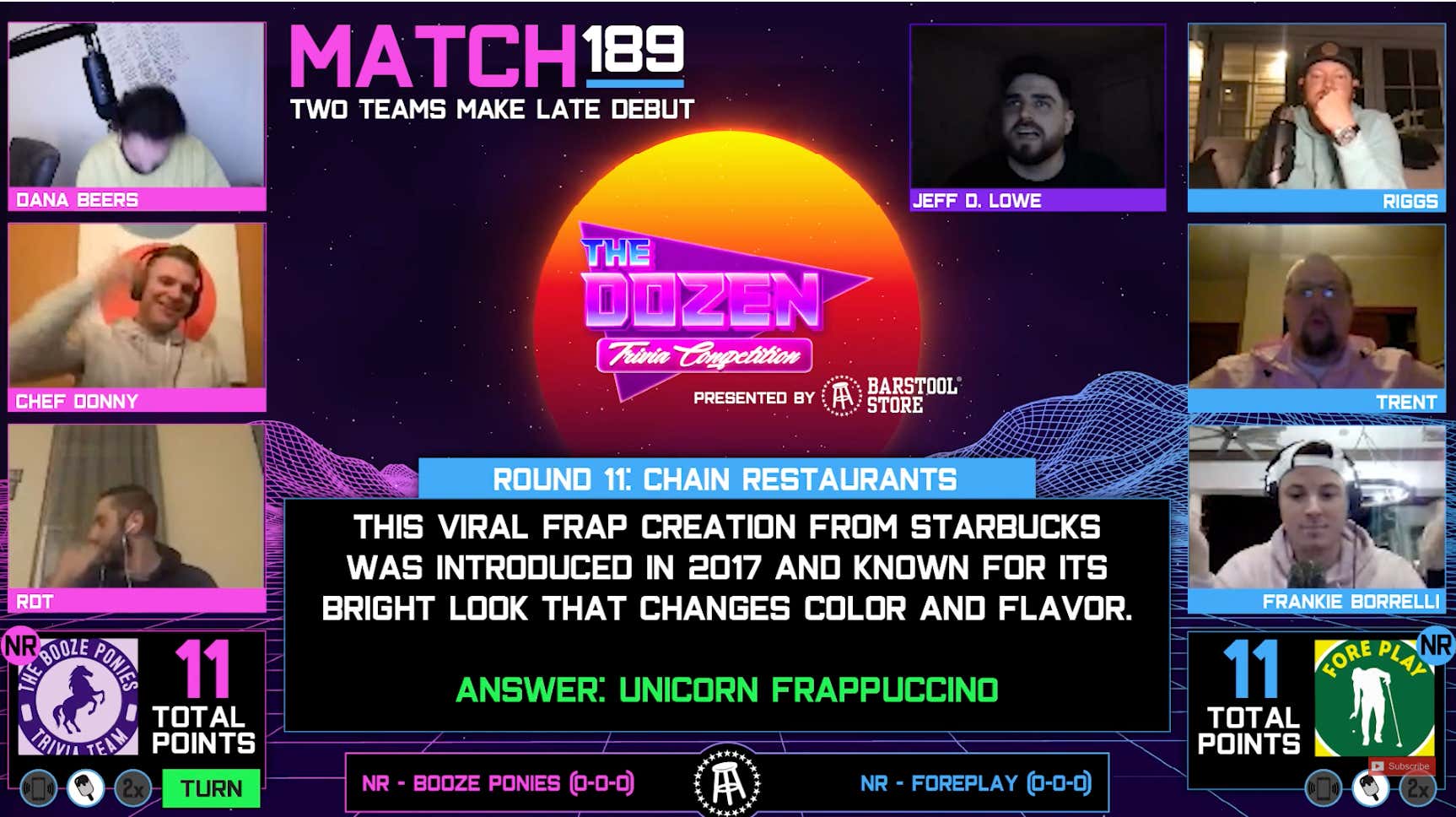 WHAT A PULL FROM LEFT FIELD! The unicorn frappuccino to tie it up! I've never had one, I never will. But I want to thank that beautiful drink for being bright pink which would lead me to remember it for the rest of my life. By far my favorite drink.

From there Foreplay missed their 11th round question, and both teams got geography so we went to OT. Like Dana said, the Booze Ponies don't play for one point. He was right, because the Booze Ponies dominated the OT question and brought home their first win. I'm happy that I was able to assist in the win, Dana and Donnie were great and they're going to do very well with Will. They're an exciting team for sure. Foreplay is going to be a menace. They're smart, they know they're smart. They have all the categories covered, be on the lookout for them to make a run, I guarantee it. I loved helping Booze Ponies get their first win, but I also understand they have another teammate, he understands next man up better than anyone. I wish them good luck moving forward.

As for me, I guess I'm a free agent after Liquid Death disbanded due to not being scheduled after our first match. I love filling in for teams but I'm also looking for a full time team to call my own. I'm a free agent ringer now. Just a guy who loves baseball and unicorn frappuccinos looking for his spot on a Dozens team. I've been approached by a few teams but I'm waiting until the end of the season to fully commit. I have some teams I'd like to play for, but we'll see if they come calling. Just being courted by teams, it's nice to be wanted. Dozens teams looking for a new player, you have my number (my DMs are open on twitter), my dad is a lawyer, come on and chat so we can make a deal and get something figured out.