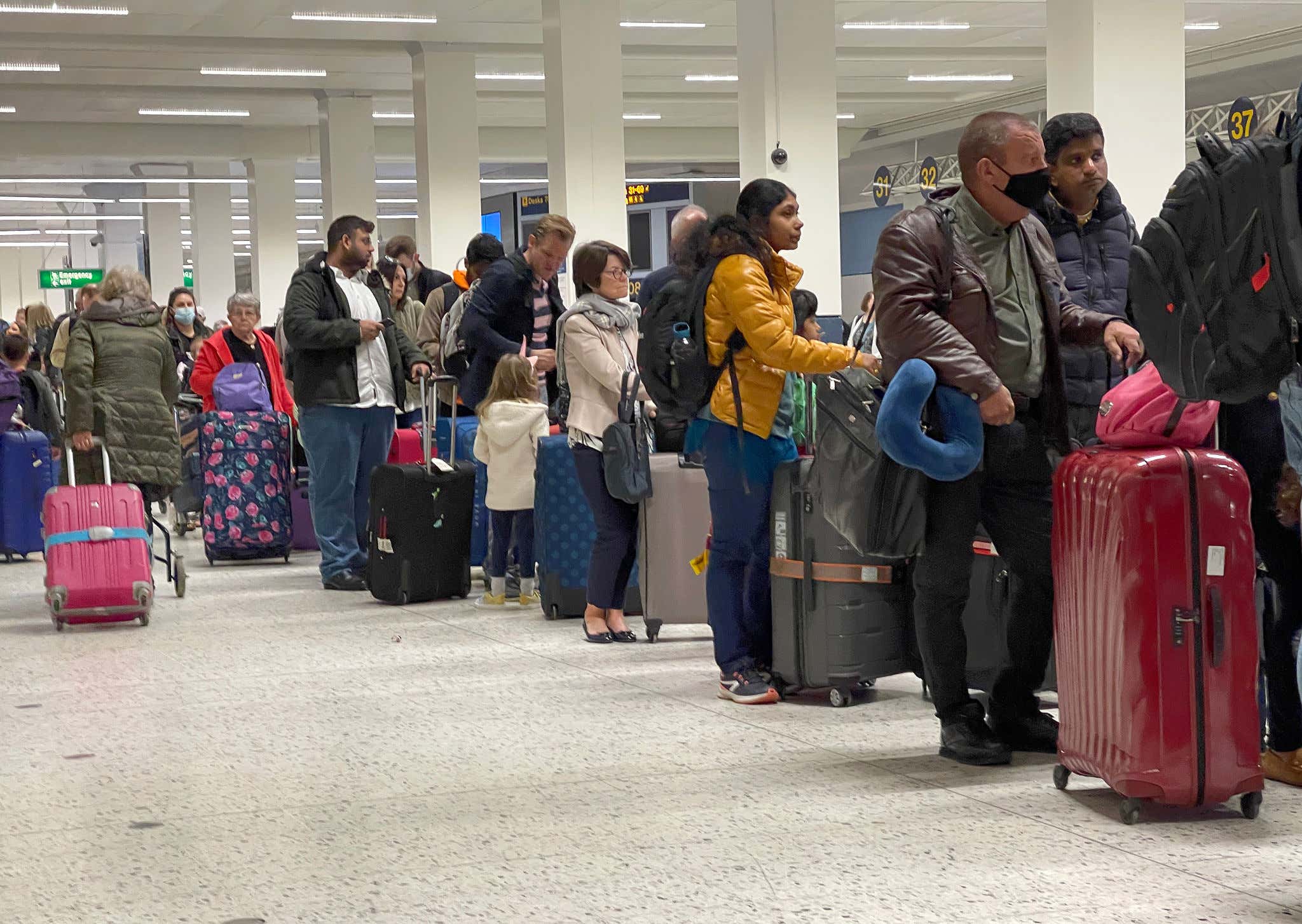 Think about your worst airport experience for a second. Maybe you were running late for a flight and had to make a mad dash for the gate, awkwardly asking the person in front of you if you could cut until you got to the front. Did you once leave your silver laptop in its own bin during security and headed to your flight without it only to realize last second what mistake you had made (my personal favorite). Deplaning when you were on the tarmac is up there for sure. Whatever your own personal hellscape is, I'm willing to bet it doesn't top what's been happening at the Manchester Airport over in the UK.

I'd rather un-alive myself than be stuck in this line. Traveling cannot be that worth going through this bullshit.

I get out of my car and I see the security line before I'm inside? Yeah no shot.

This security line with bins on top of bins doesn't even look real.

Delays have been so bad that people have flat out just abandoned their luggage and went home.

The root of the problem has been short-staffing all over the place with airlines getting rid of way too many employees during the peak of covid. They weren't prepared for this quick spike in travel and it's causing complete and utter chaos.

Bosses last month warned passengers could face queues for ‘several weeks’ after admitting they are struggling with staff shortages. Manchester Airports Group (MAG) said they have also struggled with the easing of restrictions as well as a large number of bags being rejected at security. But some staff operating at the airport, speaking on the condition of anonymity, said they feel the workplace is ‘absolute carnage’.

“We just can’t handle the workload,” one employee, who works in the airport but would not reveal their role, said. “It’s very under-staffed at the moment, things are diabolical. The entire work environment is shocking. A lot of people were furloughed and made redundant. (source)

Customers and employees are being left in tears amidst the chaos. People are waiting in security lines for three hours and still missing flights. They're waiting hours just to get their bags when they arrive. I don't know about you but if I check a bag (and I'll go to the end of the Earth not to) I need that shit in my hands no more than 20 minutes after I get to the carousel. TWO HOURS?? No wonder people are leaving their shit behind I'd have a mental breakdown. Nothing more frustrating than standing at one of those things with nothing going on.

Things have gotten so bad they're looking to bring in the police just so they have bodies that can help.

My god, if you're traveling in that general area avoid Manchester Airport at all cost. I wonder if shit gets anywhere close to this bad in the States next week for Easter. Travel safe friends.