When an interdimensional rupture unravels reality, an unlikely hero must channel her newfound powers to fight bizarre and bewildering dangers from the multiverse as the fate of the world hangs in the balance.

Every now and then a movie comes around that really separates itself from the A tier of movies and plants itself firmly in the S-Tier. 'Blade Runner 2049', 'Parasite', 'Hell or High Water', 'Sicario' come to mind over the last decade for me. The latest to achieve this feat for me is 'Everything Everywhere All at Once'.

After seeing the trailer for the movie, I didn't have a full grasp on it was going to be. I knew it would be weird because the directors, Daniels, made one of the weirder movies I've seen in a long time in 'Swiss Army Man'. I knew it would involve a multiverse because of the synopsis and I knew it would involve a few genres from the trailers. The answer is that it is all of these things and more. It basically uses the concept of the multiverse to explore not only multiple storylines but multiple genres as well and it is as weird as can possibly be.

It is equal parts comedy, family drama, martial arts, sci fi, action, philosophical, fantasy, artistic and more genres that I can't think of off the top of my head. It's almost undefinable! What's most impressive is that where some movies struggle to even blend a few genres together, this one blends a nearly countless number together flawlessly.

There are 3 big aspect of it that blew me away which will be my selling points to you.

1. The comedy: This movie has some of the best humor I have seen from a movie in a long time. For whatever reason, every good comedy writer has migrated from movies to TV, leaving every recent comedy movie INSANELY unfunny like the recent 'The Bubble'. This movie, though, made me laugh harder than any movie I have seen in a LONG time.

2. The original storyline: One of the biggest complains basically everyone has about movies these days is that nothing is original anymore. In fact, there is a different movie about the multiverse, 'Dr. Strange and the Multiverse of Madness' that is obviously connected to the MCU. By contrast, this movie is wholly original, not connected to anything and independently incredible. For all of you that love to complain about the lack of originality, go watch this. Hollywood keeps making remakes, reboots and franchises because they blow up the box office. If you support your complaint with your wallet, more original movies will get green lit!

3. The third act: The first two acts of this movie are fantastic in their own right. They establish the fun and craziness of the universe you are entering and get you laughing your ass off at a solid rate. The third act, though, is an emotional ride. Not to sound too corny but it really makes you think your place in the universe because of how it deals with the nihilistic thoughts we all have sometimes. I've seen the movie twice and this point in the movie made me tear up both times.

The movie has only been playing in a few theaters since the 25th, but it's getting a wide release on the 8th. I feel like it is a movie that should be universally enjoyed, but it is eccentric enough where I'm not 100% positive throwing a must-watch on it. 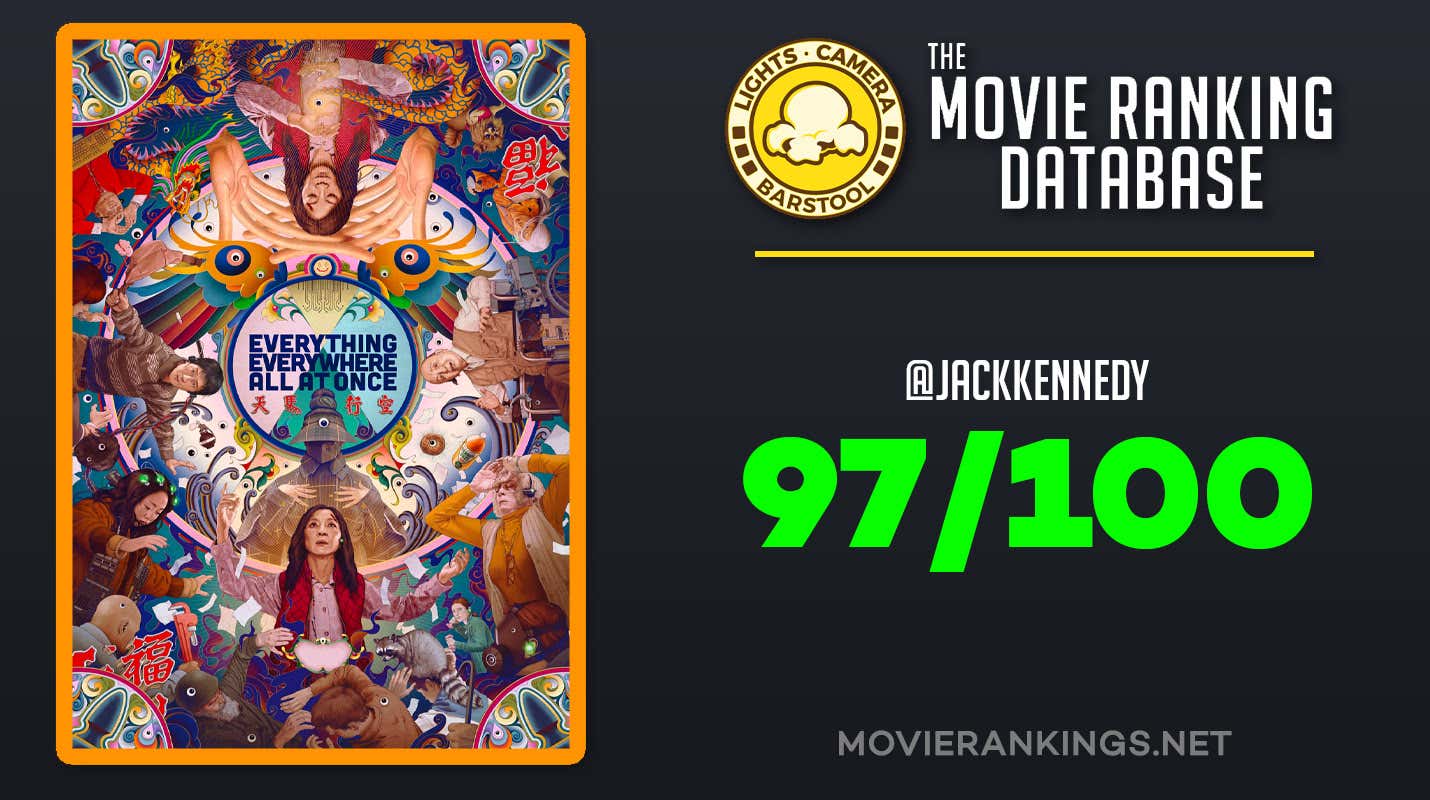 everything everywhere all at once+ 14 Tags