From the Martha's Vineyard Times:

A military cargo plane that stopped at Martha’s Vineyard Airport Friday, scooped up a motorcycle, and continued on its way was “an unplanned stop,” according to a spokesperson for a U.S. Air Force reserve unit out of Mississippi.
“While performing an off-station training mission, a U.S. Air Force Reserve crew with the 53rd Weather Reconnaissance Squadron, 403rd Wing, Keesler Air Force Base, Mississippi, made an unplanned stop at Martha’s Vineyard Airport, Massachusetts, March 24,” Lt. Col. Marnee Losurdo wrote in an email Monday. “Leadership is aware of the incident, which is under investigation.”

Lt. Col. Losurdo was responding to an inquiry made by The Times on Monday after the Massachusetts National Guard said it had no knowledge or involvement in the mysterious visit.

In my expert opinion as someone who's only been out of the military loop for a solid decade now, I'd say it's something along the lines of these Airmen down in Mississippi needing to log a certain amount of flight miles, and someone on the crew thinking about the used motorcycle they'd just bought online from Martha's Vineyard & how expensive it would be to ship, and so they say, "Hey, uh, I'll plan the, ah, the route this time. You guys just, uh, leave it up to yer 'ol Captain here."

And when they're finally over Martha's Vineyard 'ol Captain says, "Hey, let's just, ah, touch down here for a minute. For training. ha ha."

And so they do, and then the loading door drops & there's someone waiting with a motorcycle & zoooop, up the ramp it goes and everyone is like, "Wait, lol, did we just come up here to pick up your motorcycle, Captain?" and 'ol Captin is like,

So then, because now it's technically become a personal trip fueled by taxpayer money which could look bad, everybody else is all,

But then they break into cackles and they all laugh and laugh figuring, "Hey, why not make the most of these trips we gotta take anyway?! Two birds, one stone. And who's ever gonna find out?!" And then they loved the idea so much that they planned to stop in Charlotte, NC on the way home where one of the Airmen's mom's was almost done baking cookies. No harm, no foul.

But little did they know allllll the nosy nellies over at Plane View Restaurant were watching like hawks, or that the Moms of Martha's Vineyard FB group was already in a tizzy about military planes coming in to force vaccinate (microchip!) the children, or that a few social media posts would be enough to get their command involved and spur an investigation & dozens of new stories & blow the cover on their covert mission.

“Don’t see that every day,” said local resident Doug Ulwick, who was dining at the nearby Plane View Restaurant at the time and could see the whole affair, according to the Martha’s Vineyard Times, which first reported the story. 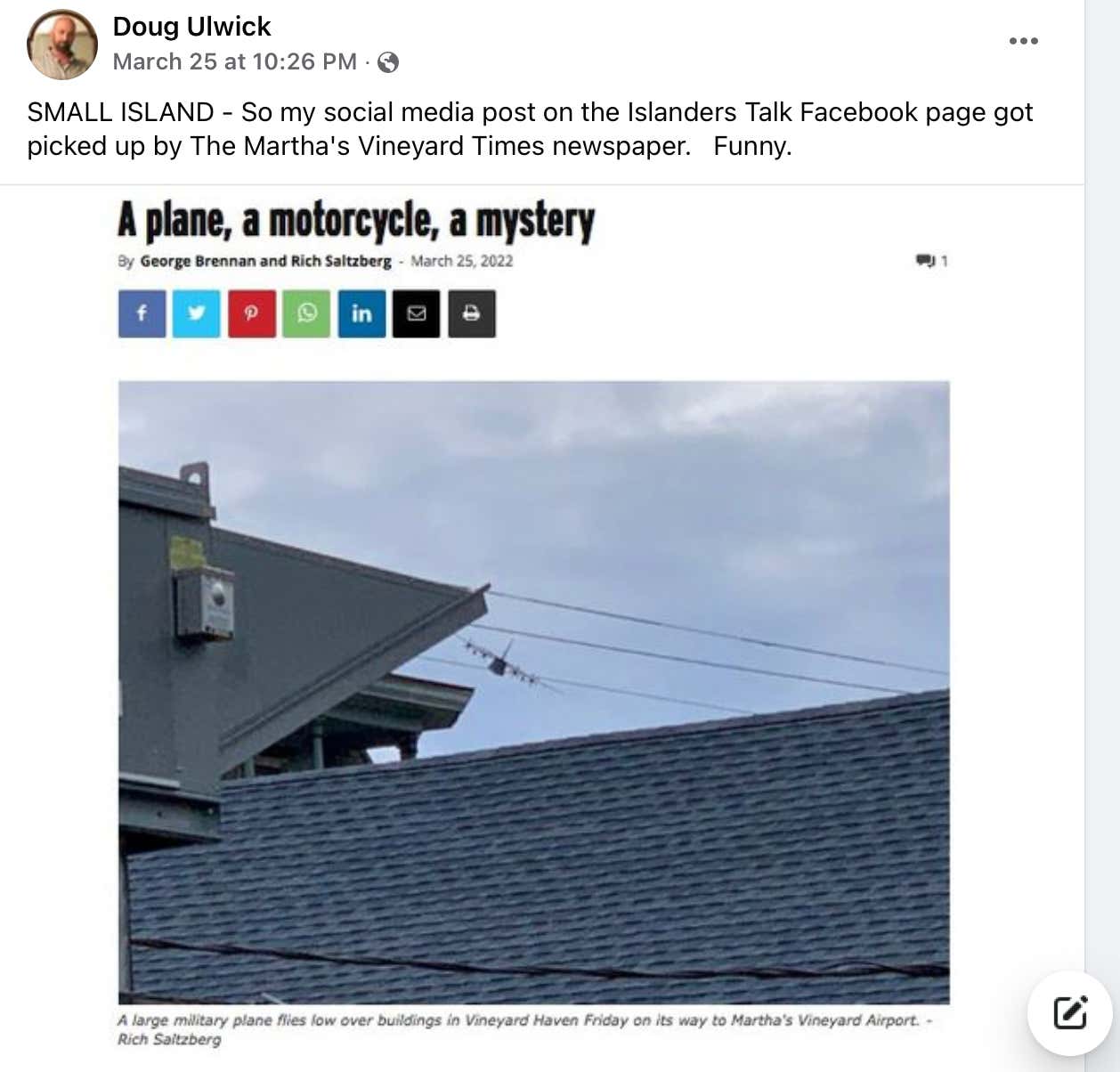 “I was eating next to the window,” he added. “We looked out and we saw the plane. We saw people walking a vintage motorcycle up to the plane.”

Basically, the crew seems to have wildly underestimated the excitement a big plane & a cool motorcycle would cause on a small, NorthEast island in winter boredom mode. Had it not been for a few folks being understandably jazzed to see something out of the ordinary & inadvertently snitching, they'd probably be Scott-free.

Not sure what will happen to the crew, but you can hear more about this & other topics on the latest ZeroBlog30: