Alright, it's here. The Final Four. Very few things in the world like this event. Brutal when your team isn't in it - especially when they blow a lead to a 15 seed. Also brutal to have to sit around and wait for the game to start. So with that in mind this blog will have you covered from all the breakdowns and picks for the two games. Let's get into it. 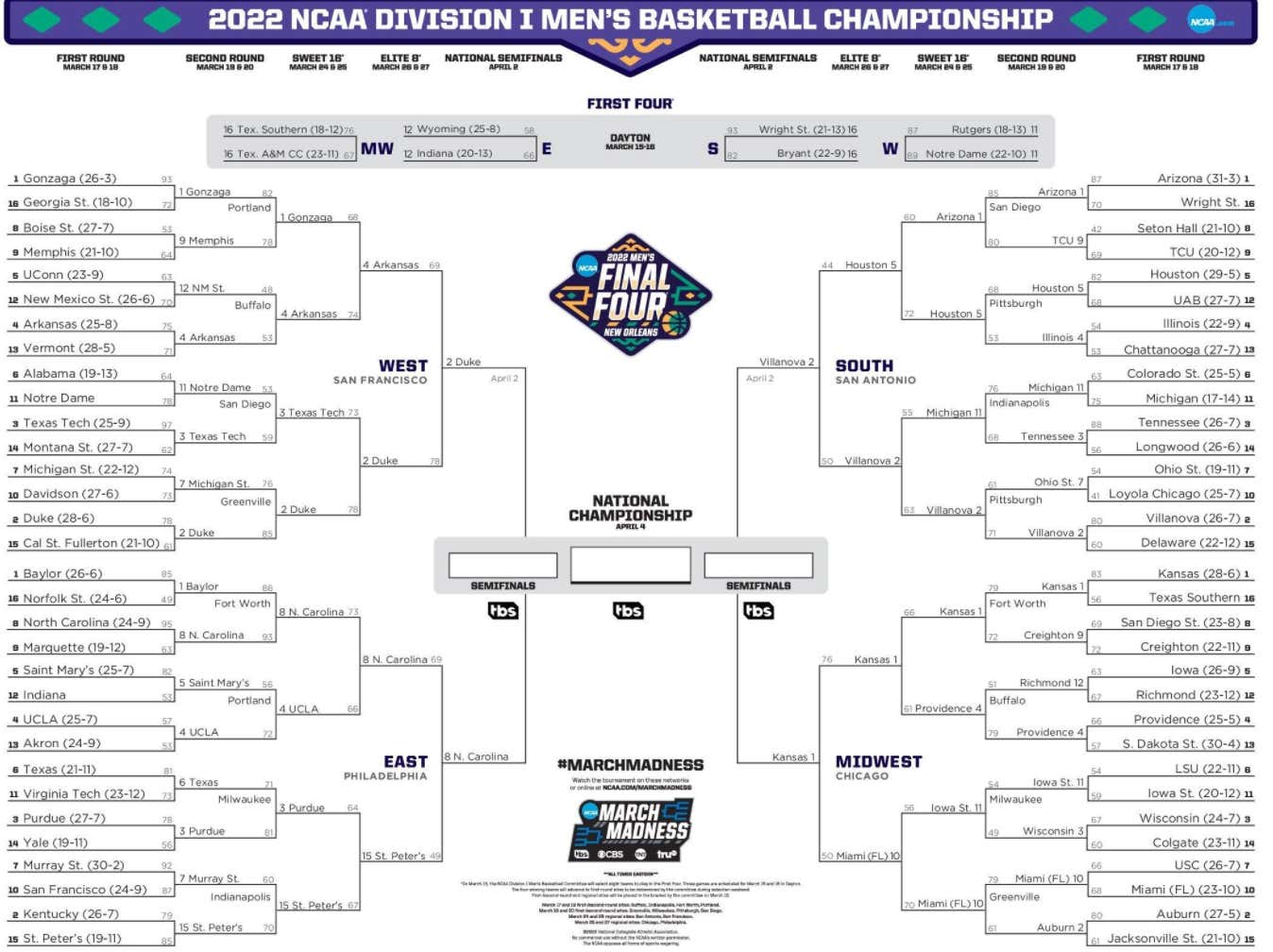 Kansas Offense vs Villanova Defense - This is where my biggest question comes with the loss for Justin Moore. I'll get to the offensive side of the ball in a second, but defensively where does the mismatch come from. You obviously have Gillespie on Remy Martin, Dixon on McCormack and then it's all thrown together on the wings. Nova's defensive strategy is absolutely gorgeous to watch. They like to front the post and dig instead of trap - the fronting of the post is a Pennsylvania staple. Kansas needs to avoid playing through McCormack. I know it's easy to look at size and depth, but Kansas has been at its best with shocking Remy Martin in ball screens and freeing up Wilson, Braun and Agbaji. I'd feel way more comfortable backing Nova here with Moore. Duh, I know. But there's likely going to be a dropoff unless Bryan Antoine can be a defensive stopper and somehow stay consistent during his minutes. It's asking a lot, but that has to be the plan for them. Here's the other intriguing subplot. Kansas is a decent 3pt shooting team, but they don't shoot a ton. They are 69th in the country on 3pt percentage but just 287th in 3PA/FGA. Nova lives with teams shooting threes. They are 307th defensively in 3PA/FGA BUT 27th in defensive 3pt percentage. That's mostly in large part due to the fronting of the post and then late shot clocks and good rotations. At the same time as Nova switches every ball screen, they stick at shooters. What I mean by that is on a high ball screen on say the right wing, the help doesn't come from left wing for Nova. They stick on the shooter and let a non-shooter help.

Villanova offense vs Kansas defense - I didn't mean to say something negative in talking about Justin Moore. The fact is from an offensive standpoint Moore isn't as valuable to what Nova does as he is defensively. Why? Nova can create its own mismatches. Obviously it feels like Nova has to go big - i.e. playing Samules at the 4 and Dixon at the 5 - just to defend McCormack. But where Nova really kicked Michigan's ass was putting Samuels at the 5 and hunting the mismatch. I wouldn't be surprised to see Wright pull this move fast because we've also gotten good Samuels so far in the NCAA Tournament. The other thing Nova does probably better than anyone in the country is invert the offense. They put their guards in the post and force help that way. It's why the 2018 team with Jalen Brunson was so good. There's arguably no better player I've seen at inverting the offense than Brunson. Nova will do it by getting Gillespie to back down in the post and daring Kansas to help. Game is over at that point. Now the one thing I haven't seen too much talked about or really at all is will Jalen Wilson be able to defend Samuels in the post during Nova's big lineup. If Wilson can't defend Samuels in the post without help, there's another game over point.

Reasoning: Look, Kansas is awesome, there's no doubt about that. But it ultimately comes down to if Nova can blitz them like they did UConn without Justin Moore. Nova can get hot. At the same time if Nova can just keep it close, they are in a great spot because of free throw shooting. Kansas is subpar as a team and Nova is No. 1 in the country. That's a big enough variable to keep it in the number. I don't love the number and was hoping it'd jump a point or two, but this game has so many mismatches I'll just take the points here.

Duke offense vs UNC defense - Thanks to the last few Tournament games Duke is now the No. 1 ranked offense on KenPom. That's sort of crazy when you think about the true lack of shooting Duke has. They rely a lot on AJ Griffin from outside, but this offense goes as Paolo goes. He's so damn good at getting downhill and trying to exploit him in a mismatch. It's not exactly a secret that Duke wants to use as much ball screen as possible too. They will do it in different ways, in the sense of using both Paolo and Williams as screeners and Moore, Griffin and Roach as the ball handler. It's not always the standard 5 sets a screen for a 1. Now I'm VERY curious to see how Hubert Davis hides Brady Manek in this game. Manek has been awesome on the offensive side of the ball but he's uh not great defensively. You might want to put him on AJ Griffin and just let him faceguard a bit, but you can't have him on Paolo off the bat. Again for Duke it sounds simple but it's truly not. They want to go ISO ball and PnR. But they do it to hunt out the mismatch. That mismatch is going to be Manek at least to start the game. Something to keep an eye on especially if it's a tight whistle.

UNC offense vs Duke defense - I'm not going to lie. I'm terrified how much this current Duke run reminds me of 2015. That team stunk defensively, got hot in the Tournament and ended up on the right side of the bracket where they played No. 7 seed Michigan State in the Final Four. Sounds a little familiar. This time it's thanks to a 2-3 zone helping them out. They went zone against Texas Tech and it flipped the game. Now you can't really zone this UNC team because they can pop Manek as a zone buster and not rely on the guards. Also helps Bacot can hit that 15 footer. Now if and when Duke is in man, expect to see the more 'modern' offense from UNC. It's the Hubert Davis background with Bacot alone in the post, surrounded by shooters and trying to utilize the PnR in the middle of the floor. Leak Black is basically the worst shooter that will be on the floor and he's 33% from 3. That's how the floor stays open for Bacot to roll and force Mark Williams to make a decision. The other massive thing here is if Duke keeps UNC off the glass. UNC is an elite offensive rebounding team while Duke is actually 215th in defensive rebounding percentage. That opens up even more if they are in that zone.

Reasoning: That number is just too high for me. Obviously both games were blowouts during the regular season but I do think you see a little slow start. I wouldn't be surprised to see some jacked shots and nerves where it's like 9-5 more than 5 minutes in or something like that. Again, both teams have VASTLY improved defensively. That's the key here. Both teams are also incredibly short when it comes to the bench. They don't want to foul, they don't want to sub.