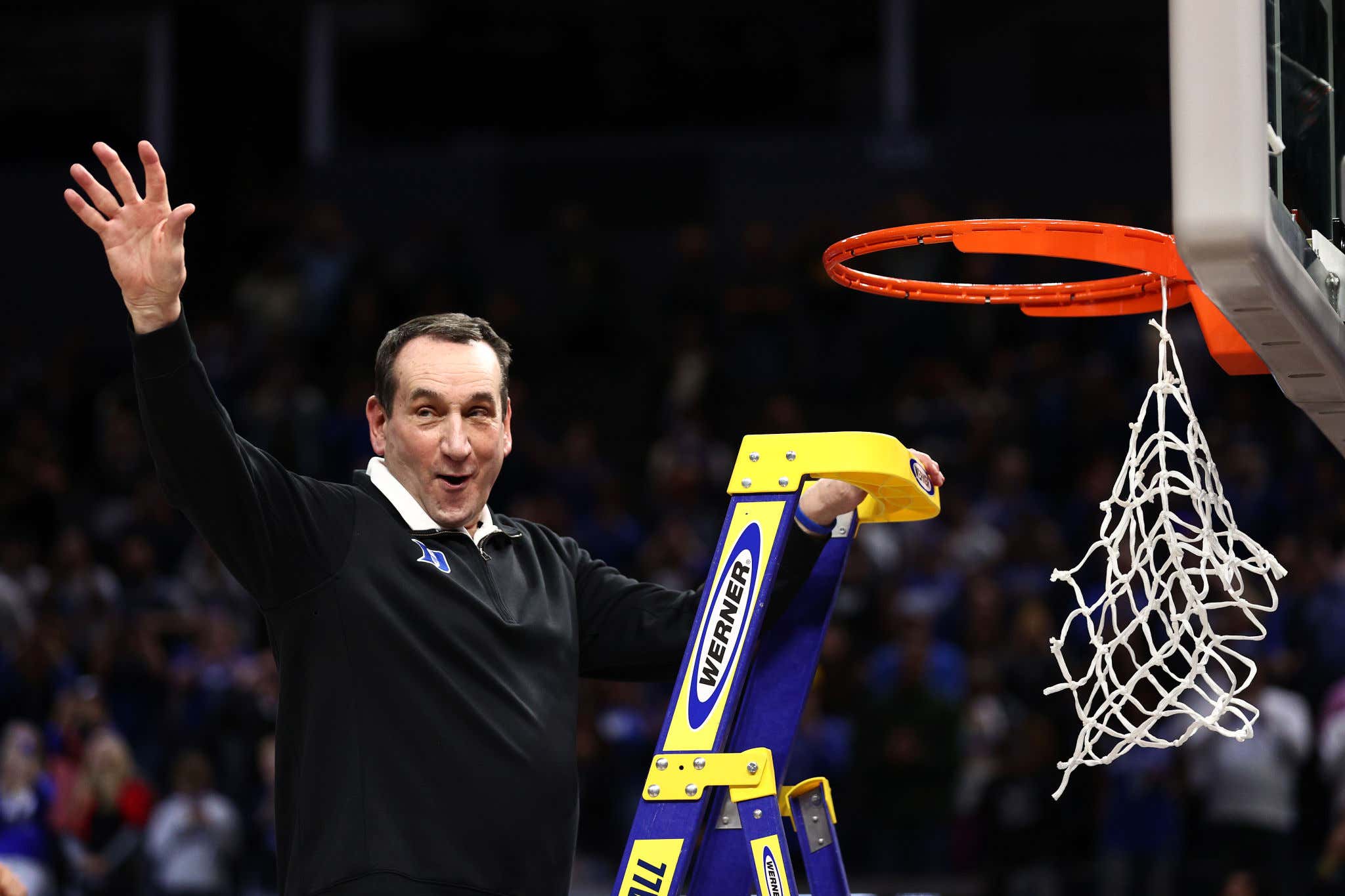 New Orleans is playing host to what should be a thrilling Final Four, as Saturday's two winners will move on to play for all the marbles Monday night. We've got a full-on blue blood lineup of national semifinalists. You can't really count North Carolina as a Cinderella story, but the eighth-seeded Tar Heels at least provide some variety among No. 1 seed Kansas and second seeds Duke and Villanova.

The biggest storyline has been a sweet, slow burn throughout the tourney: Will this be Mike Krzyzewski's last game as Duke's head coach? But that's just the tip of the iceberg, so let's get into the relevant stats and info you ought to know in this betting preview, along with a Play of the Day. We're now 2-1 on that count. I have no shame in my last pick, Saint Peter's +8.5. Anyone not rolling with the Peacocks at that point didn't have a soul.

Thank you for that magical run, Saint Peter's. We won't soon forget.

When Villanova last cut down the nets as the last team standing, they destroyed Kansas 95-79 before that iconic buzzer beater against North Carolina in the grand finale. With two more wins, Wildcats coach Jay Wright could win his third natty in the past six tournaments, which is absurd.

Wright had fallen short of the ultimate goal time and again during his Villanova tenure. Now he runs arguably the most fundamentally-sound, well-oiled machine in college basketball, with a 20-3 SU mark in recent NCAA tourney games.

What's a real shame is the Wildcats (+175) won't be at full strength. Junior guard Justin Moore suffering a torn Achilles in the team's Elite Eight win over Houston. Had Moore been able to go, Villanova might've been favored. Pretty sure no one is fazed despite the big blow Moore's absence undeniably is.

All the pressure really is on Kansas (-4.5) and Bill Self to deliver another championship. He won it all in 2008, but hasn't since, with numerous close calls. It's becoming something of a curse. The Jayhawks have had way too much talent come and go to have only one national title since Larry Brown's last ride in 1988. They're also 4-7 ATS vs. top-25 opponents this season.

Kansas loves to push the pace, whereas the Wildcats like to wear down adversaries with a highly efficient half-court offense. The Under (132.5 at -108) has hit in six of Nova's last seven overall, so they've dictated of late. They're also first in the nation in free throws at 83%. The Jayhawks only hit 71.3% from the line. Here's another key area to watch:: 38.6% of Villanova's points come from the 3-point line, which Kansas guards at an elite level (29.6%).

The Wildcats' senior trio of Collin Gillespie (OU 15.5 points), Jermaine Samuels (OU 14.5) and Caleb Daniels should keep the offense operating at a high level sans Moore. I'd also expect sophomore forward Eric Dixon to step up. He's drilled 17 of 33 treys this season, and should see his volume from beyond the arc go up.

As long as the underdogs' outside shots are falling, I think they'll be able to hang tough. They also have plenty of sound perimeter defenders to share the unenviable task of marking Jayhawks leading scorer Ochai Agbaji (OU 16.5 points).

This Villanova group just feels special. Wright's superior ability to deliver in big spots over his counterpart isn't nothing, either. You're bound to see a LARGE share of the public handle on Kansas' side of the spread and moneyline. That's precisely why I wouldn't count the Wildcats out, even if this is a Revenge Game for the Jayhawks.

One more trend: Villanova (+135) has won the first half in its past seven NCAA tournament games.

Vengeance is a theme throughout this preview, and it applies here much more recently. In the last regular-season game of Krzyzewski's career, on Duke's Senior Night at Cameron Indoor Stadium, the Tar Heels killed the mood with a 94-81 rout. Their offense has maintained that caliber of play throughout much of the Big Dance.

OK so like. Coach K's career might end with a loss to North Carolina. OR, he's going to beat them in the Final Freaking Four. Either way, WHAT A STORY. These teams have never met in the NCAA tournament, and during Krzyzewski's many years at Duke, let's just say the rivalry is too close to call:

This is the stuff of dreams, seriously. But here's the deal: The Blue Devils (-4) are clear favorites, and while many of their Krzyzewski-coached teams of yesteryear lived and died by the three, this season's youthful, future-pro-laden rotation can score at will from anywhere based on sheer talent and will. Duke ranks first in adjusted offensive efficiency, and is 7-2 vs. the Over (150.5 at -113) at neutral venues.

North Carolina (+163) boasts a solid 5-5 SU mark as an underdog. Given its eruption the last time out against the Blue Devils, it's hard to imagine they'll emulate that again. Getting into a track meet with Duke and its incredible cast of playmakers led by Paolo Banchero (OU 17.5 points) may work to their bitter rival's benefit.

Blue Devils center Mark Williams averages 2.9 blocks per contest and is an ideal, paint-patrolling force to keep UNC's double-double machine Armando Bacot (OU 16.5 points) in check. Bacot was 10-of-11 from the field in the last meeting. It's a lot to ask of him to be that efficient again.

Here's where I'd have hesitation on the Tar Heels: Their R.J. Davis-Caleb Love backcourt is so streaky shooting-wise that it's hard to trust them in this big of a spot. The law of averages in that regard would seemingly favor Duke, who's yet to crumble under the weight of the Coach K narrative and seems immune to any pressure from it.

With apologies to Big Cat and the Coach K haters, I'm fanning the Marty Mush flames on this one. It's simply a matter of the Blue Devils having superior players. They have at least three, probably four first-round picks between Banchero, Williams, AJ Griffin and Wendell Moore Jr. UNC has gotten hot at the right time, but obviously managed to earn a mere eighth seed for the Big Dance.

This just in: The public at large kinda loves to hate Duke.

I'm willing to wager that the sharp money will roll with the favorites. Just think about it: Is Coach K really gonna have his last regular-season contest and his last actual game both end in defeat to the Blue Devils' archenemy? I'll go out on a limb and doubt that.