You have to love seeing this, a minor league player being provided with housing that is furnished for the player, their wife, and dog. Why is this so hard people? It's been an ongoing issue for years in the minors but it seems as if teams are finally catching on that they should be providing adequate housing to their future stars. Cole Uvila, a minor leaguer for the Orioles, tweeted this out yesterday and it's picked up traction. A lot of time these minor leaguers report to whatever city they're going to play in and they don't know where they're going to live. The team may provide a list of apartment complexes, but lets be real, they're shitholes. There was an article in The Athletic last year detailing this and they even talked about minor leaguers finding mattresses on the side of the road and bringing them back to their apartment because they needed another bed. If the only team in baseball that DIDN'T see it's value go up last year can provide housing like this, no one else has excuses not to.

This seems like something small and not a big deal, but in all actuality it's huge. Stuff like this has been an issue in the minors forever, guys not having proper housing. Minor leaguers just didn't have good places to stay, or they were being forced to rent their own apartments. A lot of time these guys were cramming 6-7 guys into a 2-bedroom apartment with a few mattresses on the floor and some couches. That may be fine for you and your buddies in college, but these are future MLB stars here, and they're being forced to pay out of pocket from a paycheck that isn't that much anyways for these shitty places. It was insane that teams were treating their future stars like that. Well a few months back MLB announced that teams would be required to providing housing for minor leaguer platers starting in 2022. How is it 2022 and this wasn't a thing before? The Orioles at one point were paying for minor league housing last year, but only up until a certain date. There was a rumor that after that date the players were basically on their own and some even contemplated sleeping in their cars. Spending 80% of your paycheck on housing doesn't seem ideal at all. We've heard horror stories of guys not knowing where they were going to sleep, babies and wives sleeping in cars because they couldn't afford to pay rent, it's horrible. 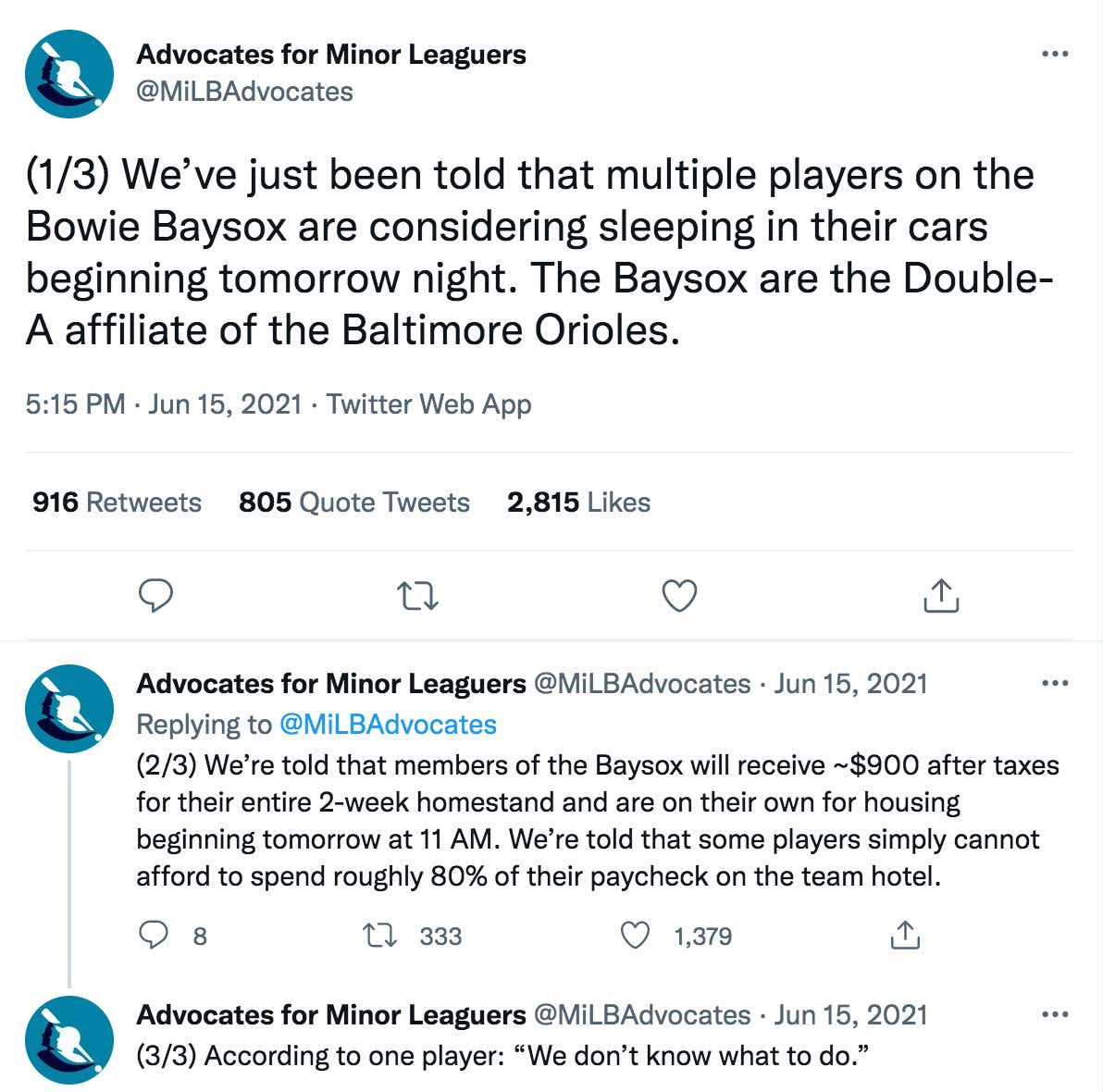 Again, this wasn't an Orioles issue, it was a baseball issue. It's nuts that this is still a thing. Providing housing like the picture above  shouldn't be an exception, it should be the standard. And this comes on the heels of the Nationals, Dodgers, White Sox, and Twins demanding their minor leaguers pay their clubhouse dues, something that MLB said it was getting rid of in 2020.

This is all so ass backwards, the teams are swimming in cash, they have no problem making money. Yet they weren't on the hook for paying for housing for their employees. Imagine going to a mandatory work training in a remote city far from where you are from and you are forced to room with 6 other guys in a shitty apartment and the company won't pay or reimburse you for where you're staying.

Hopefully we're past this housing stuff and like I said, this is the norm not an exception. Good on the Orioles for providing a quality space for their guys to live while they chase their dreams. They have enough stuff to worry about, trying to find a nice place to live with your wife doesn't seem like it should be one of them. Nice to see a team step up like this, hope the others follow soon.