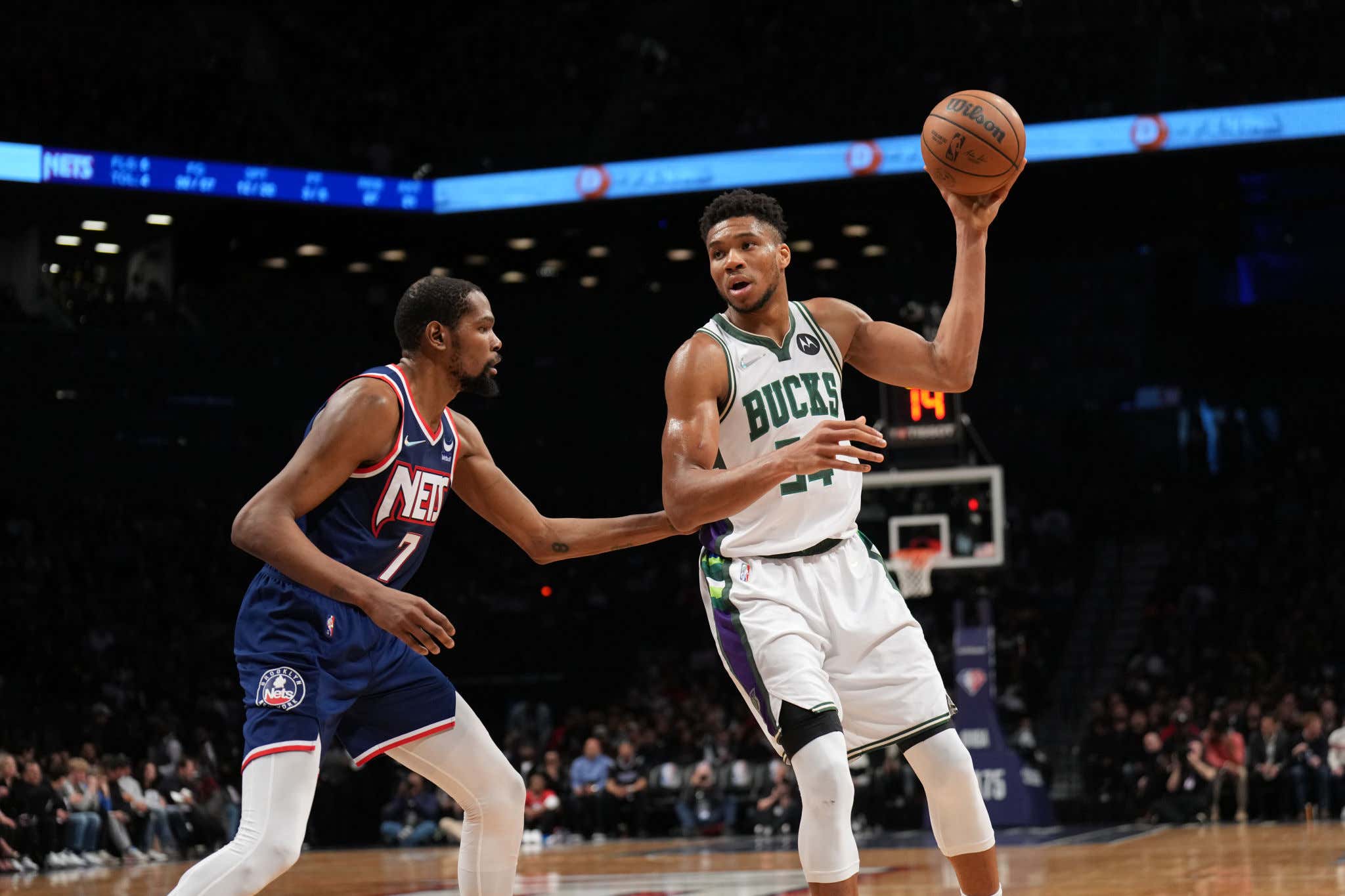 We know the history. If Kevin Durant's shoe size was one size smaller, it's possible the Milwaukee Bucks don't win the NBA title last year. It wasn't meant to be for KD in the 2021 conference semifinals. He put the Nets on his back, and very nearly did knock out the eventual champs. Unfortunately, Thursday night was much of the same for the Brooklyn superstar, as Durant missed a buzzer-beating 3-pointer to fall at home to the Bucks 120-119.

In fact, the guy who made the biggest three of the night was Giannis Antetokounmpo.

I know Giannis typically can't shoot 3-pointers, but damn if this man doesn't work at his game. The Greek Freak is starting to Valmorphanize into a trey-dropping fiend in the clutch. He could've dished the ball elsewhere. Instead, Giannis Antetokounmpo CANNED it from downtown to tie the game at 110 and force overtime. A couple of sick-ass dime passes later in the extra period — one of which hit Wesley Matthews in the pocket for a corner 3, one to set up an easy floater from Bobby Portis — and it was yet another epic performance by an emerging legend.

Another encouraging sign for the Deer: Giannis did brick a couple free throws in overtime to make things tighter than they needed to be, only to drain the two winning freebies with mere seconds remaining before Durant's last-ditch attempt. En route to his Finals MVP, Giannis notoriously struggled at the foul line before overcoming those demons. He canned 15 of 19 attempts on this particular evening.

Khris Middleton got ejected earlier for a Flagrant 2 foul, so Milwaukee had to proceed down the stretch absent one of its three best players. And without Middleton to help out defensively on Durant, KD capitalized and scored 13 of Brooklyn's last 16 points.

But again, let's give it up for Giannis. A couple nights after STUFFING Joel Embiid at the rim to preserve victory in Philadelphia, he went all Harden/Luka late in the fourth quarter.

If he can ever get that 3-point percentage even in the mid-30s, it's just going to be absolutely unfair for the rest of the league. I'm not holding my breath on that.

Milwaukee won the season series 3-1 over Brooklyn, but tonight was obviously the most reminiscent of a playoff atmosphere because, well, we're just about to start those games in earnest. And make no mistake about it: This was an absolute gut punch for the Nets, who took control against the defending champions, and actually had Kyrie Irving in the lineup for a home game for only the third time this season.

Sadly for Brooklyn, or not sadly maybe, they've burned so many games due to Kyrie's prior ineligibility to play at home, and KD's injuries, that they may well be on a collision course with the Bucks in the first round of the playoffs. No pure basketball fan is complaining about another postseason tilt between these squads, but it's kind of a shame that it might happen so early on. With so much parity in the East and across the NBA, to see two of the most star-laden teams square off in a potential 2-vs-7 matchup feels…kind of wrong or something.

Oh well. That's why you're rewarded for adeptly grinding through the marathon 82-game season.