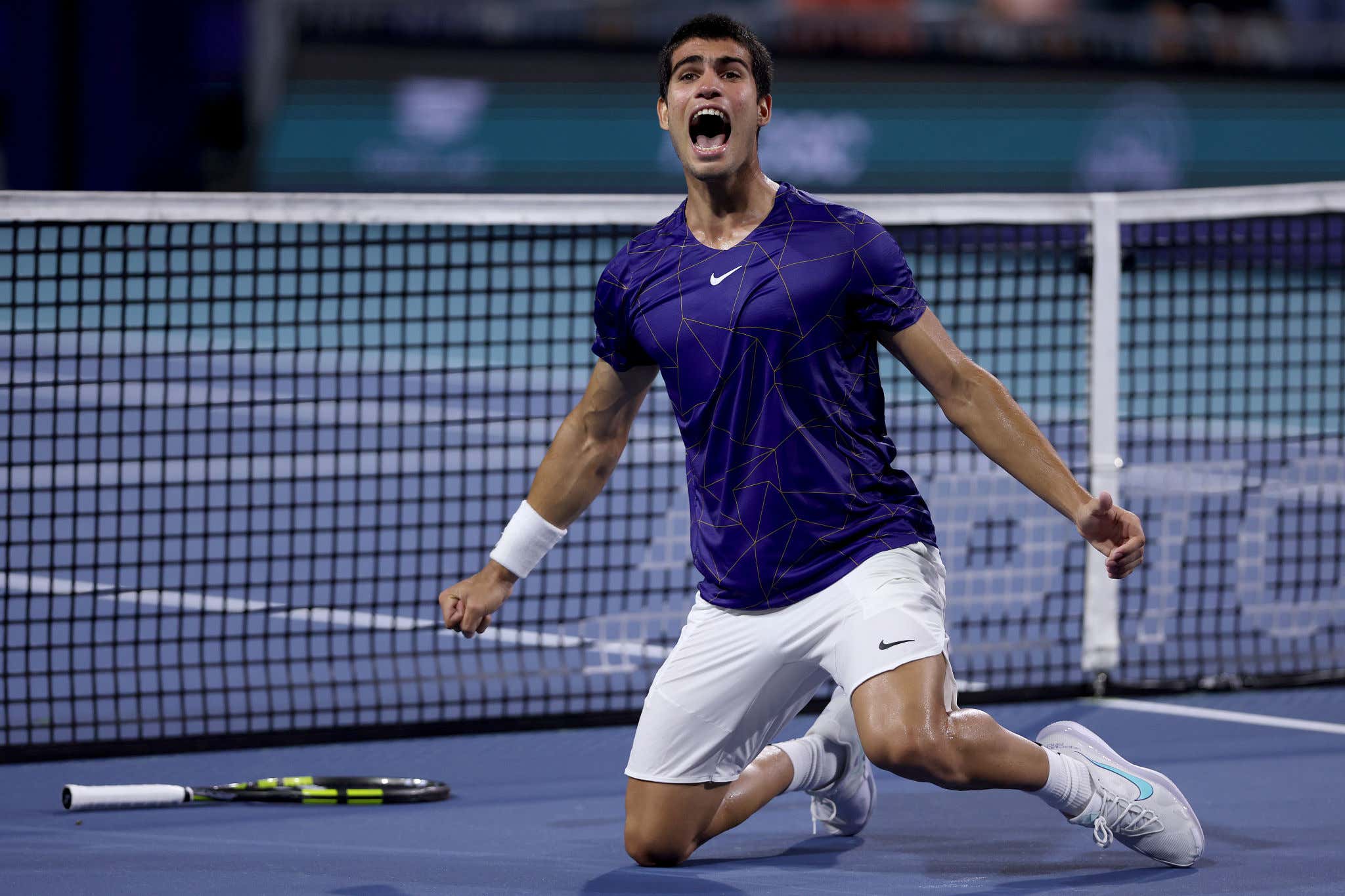 If you don't mind I'm going to talk about an 18 year old phenom from Spain who has lit up the tennis world. Now you probably haven't heard of Carlos Alcaraz yet because tennis isn't as big as it should be in America, but that's where I come in…to spread the good word to you fine people. That headline isn't an April Fools joke, this kid is b-lining to the top of the sport at an insane rate. You need to know about this guy.

Alcaraz first burst on the scene when he upset Stefanos Tsitsipas at this past year's US Open (blog here). I happened to be in attendance to see the magic happen and it was something else with the crowd all getting behind the kid. That was his first real moment where you saw all the tools he had to offer, but still it was understandable that it would take him some time to start being a consistent threat on the tour considering his age.

Yeah never mind that nonsense, he's here. Alcaraz has arrived as a force and it's fucking incredible.

Just a few days ago Alcaraz had himself face to face with Tsitsipas in a rematch in the Miami Open. Vegas would not fooled this time, making Alcaraz the favorite (-160) over the world No. 5. Alcaraz proceeded to take him down in straight sets. That win included maybe the point of the year.

Last night in the quarters of the Miami Open, Alcaraz faced off against up and coming Serbian Miormir Kecmanović. If not for Rafa vs. Medvedev in the Aussie Open final this would have been the definitive match of the year. From start to finish it was filled with highlight reel moments. This blog is mainly about Carlos, but Kecmanović has clearly asserted himself as a dangerous player on the tour. He played fantastic, but Alcaraz was just too good.

Guys will go there whole careers without playing a point like this next one. Doing this at 18 isn't fair.

He's got pieces of Novak, Fed, and Rafa's game and he's only going to get better with experience. You're going to see him soar into the top 5 before you know it and number one in the next few years if he's not careful. Making the semifinals of Indian Wells and Miami (two huge tournaments held in succession of each other) at his age is not something you see everyday. In fact everyone who has done it that early in their career has gone on to become the top player in the world. Makes sense.

Carlos gets defending Miami Open champ Hubert Hurkacz tonight at 7:00 in the semis where he's currently a -235 favorite on the Barstool Sportsbook. With the Final Four just a day away, get yourself some tennis tonight before you get into some shenanigans. The women's final should also be fantastic tomorrow night with an in-form Naomi Osaka going up against the new number 1 woman in the world and my personal favorite Iga Swiatek (-195). Go Iga Go!