In case you haven’t heard, the Chiclets Crew is headed to Toronto next week to watch some NHL games, drink too much Pink Whitney, and make a small fortune betting on the ScoreBet App. I’ve been focused on all things Ontario since the announcement and can’t wait to make it to the Great White North.

The Ontario blogs made me antsy, but for me to get in the right frame of mind I need action.. I’m putting the pressure on players that were born in the great province of Ontario.  So not only were they born in the north but they all played in the OHL and if you listen to the pod anyone who laced them up in the O believes that is the best league and wears it like a badge of honor.

Players That Will Win Us All A Bunch Of Money:

S. Stamkos, Tampa Bay Lightning - Born in Markham, Ontario he grew up playing for the Markham Waxers youth hockey program. Graduating from there to the OHL and the Sarnia Sting. Two years in Sarnia and he was drafted first overall to the Tampa Bay Lightning and the rest is history.  The guy has alligator blood always hanging around with a dominant one-timer on the PP that will surely get us the point needed tonight to check the box.

M. Marner, Toronto Maple Leafs - Also Born in Markham, Ontario which means people will probably start bottling the water there and selling it to the crazy hockey parents at Chesswood Arena.  He chose a different path than Stammer and played his youth hockey for the Vaughn Kings.  He spent three years filling up his bank account for the London Knights in the OHL until he was drafted 4th overall by the Toronto Maple Leafs.

M. Duchene, Nashville Predators - Born in Haliburton, Ontario he played his youth hockey for the Central Ontario Wolves and then two years for the Brampton Battalion in the OHL. He was then selected 3rd overall to the Colorado Avalanche. He has had some up and down seasons throughout his career that have landed him in Nashville where he is having a career year.  Matt has been hot lately so look for an early apple tonight.

N. Kadri, Colorado Avalanche - Born in London, Ontario he played his youth hockey for the London Jr. Knights. I am not sure the youth hockey Knights pay their players like the OHL team but he moved from there to the Kitchener Rangers in the OHL for 2 years. Eventually, he was traded to his hometown London Knights and played there for 2 years before making his way to the NHL with the Toronto Maple Leafs who selected him 7th overall. He is now thriving in the rocky mountains playing on the first PP and second line center where this year is going set him up for a big pay day. I need to see this haircut in this year's Stanley Cup Playoffs.

So many great players from Ontario in the NHL but these 4 are primed for big games tonight and will help us cash this +385 parlay and add to our growing account for a monster play in Toronto and a big night at Rendezviews. 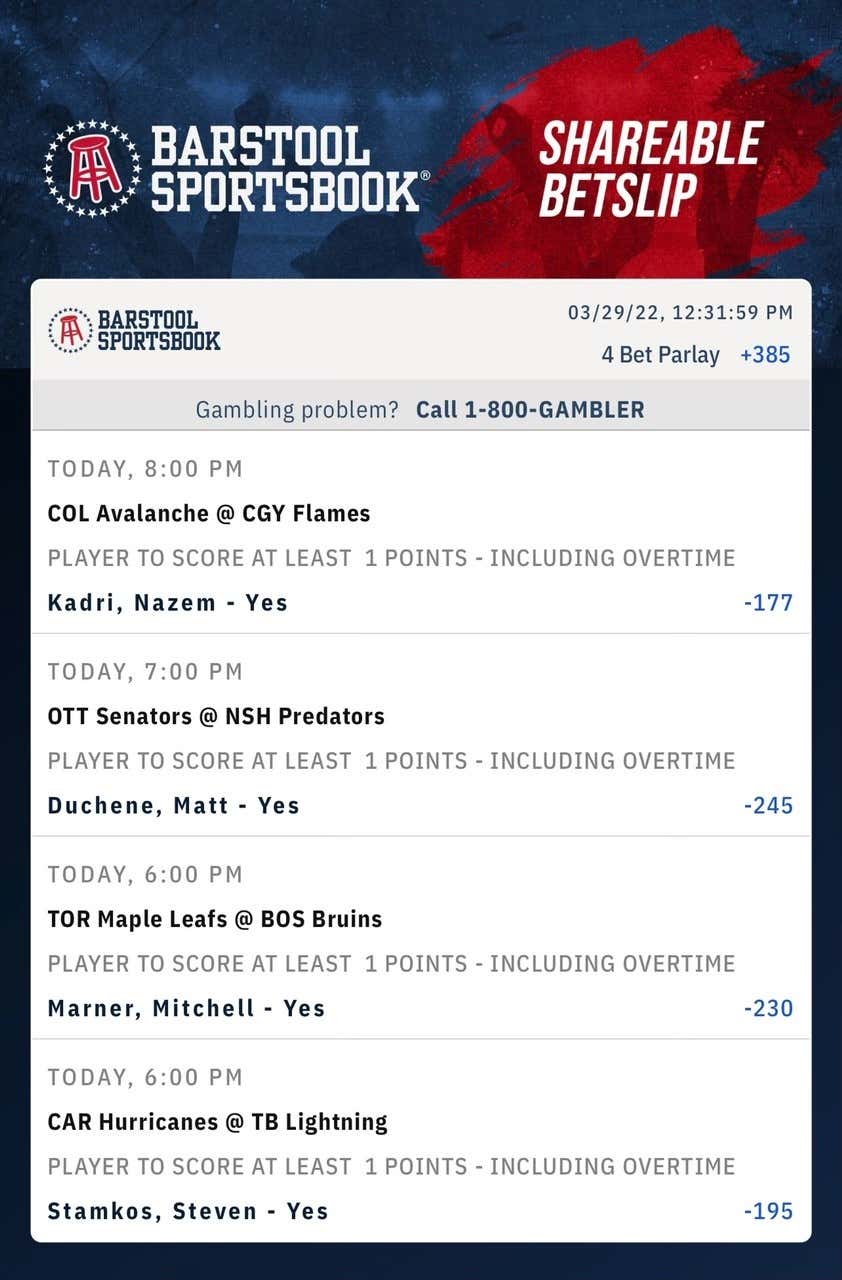