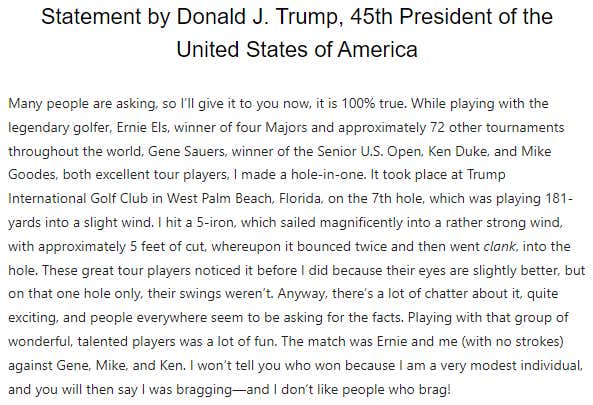 Look, there are plenty of things you can say about Donald Trump. That's a lot of man to break down. But one thing you unequivocally can't say is that he isn't one of the funniest to ever do it. The guy consistently delivers.

And to that point, this is the best press release I've ever read. Some of the best authors of our time couldn't describe anything with as much detail and passion as Trump described his ace. I really hope he was standing over the shoulder of whoever typed this out saying his 5-iron "sailed magnificently into a rather strong wind," and making sure to mention his swing was better than the PGA Tour players he was with before re-iterating at the end that he definitely didn't want to brag.

If you hit a hole-in-one, though, no matter who you are, you get to brag. Talk your shit, king. I still remind everyone of the one time I hit the flag stick every time I'm on a course. Shout it from the rooftops, Don.

I also forgot how addicted I was to talking like Trump for a rather extended period of time until I read this. Beginning any statement with, "Many people are asking," automatically makes it more interesting.

I need Trump to issue more press releases about anything happening in his life. I just miss hearing from him every now and then.