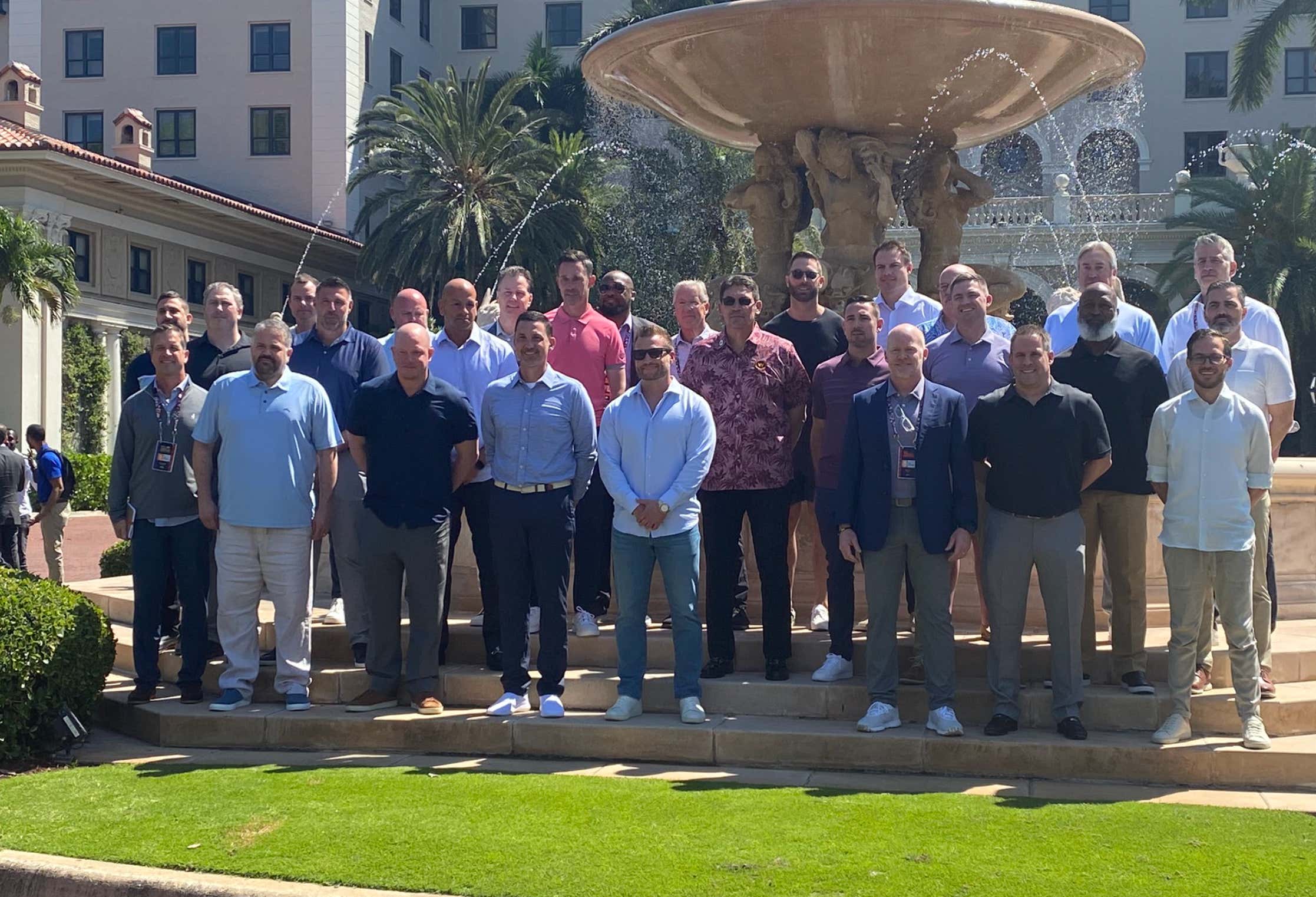 Hello. It's me Big Cat. I'm blogging again. First off, I genuinely miss blogging. Part of me wishes I could go back to just blogging 15 times a day, a simple life, an honest living. The bad news is I haven't blogged in such a long time that I didn't know how to log in this morning. The good news is I now know how to log in so maybe you'll see me more often (Shout out Nate Dog).

But lets get to the business at hand. Long time stoolies know this is my favorite day of the year, the Annual NFL Coaches picture. When someone in the league office decides its a good idea to have 28 (4 missing this year) very serious gentleman stare into the sun and smile for a picture even though all of them would probably murder the guy next to them in order to win a Lombardi. It's awesome and awkward and great. Let's break it all down and give out some awards.

The "I Just Won A Super Bowl Award Ask Me About My Super Bowl, I Won That Shit, No Big Deal" Award - Sean McVay

Look at that smile, look at the beautiful shirt and jeans and the perfect hair.  Sean McVay knows what he's doing here, he knows he's hot shit. He's not a Football Coach, he's an Abercrombie and Fitch Model. Front and center, flexing on the group. Good job Sean, you deserve it. Also special shout out to Sean going with the fresh white shoes that every 23 year old guy thinks is the highest form of fashion when going out to a bar on a Friday/Saturday night. He'll grow out of that when he turns 30 in 7 years.

The "I Gambled My Career On Sam Darnold" Award - Matt Rhule

Matt Rhule has seen some shit man. He's dressed like a guy who used to be a decent sales guy, got promoted to mid level management for the secure paycheck not reliant on commissions, and now is stuck under water with his mortgage while his 3 very attractive daughters attend the most expensive private colleges in the country. The guy is as tired as tired gets. His Corolla has had the check engine light on for 2 months and his favorite local bar permanently closed during covid. Its bad for our guy right now.

And to think he could've avoided all of that if he had just, you know, watched Sam Darnold play football at all the last 4 years before bringing him to Carolina. One good thing about Matt Rhule, when he gets back to his hotel tonight and takes off his shoes and those crinkled Old Navy khakis for the first time, that will be the best 2 minutes of his day. Theres no shame in that living, just have to enjoy those little moments.

Now I'm not one to judge because I'm a fat fuck, but I think we call this look "Beefy". 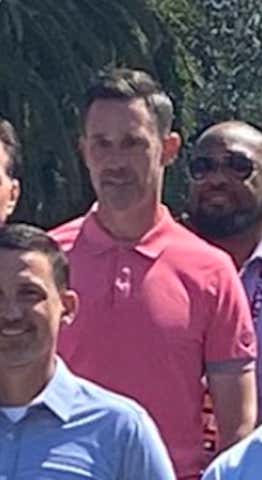 Kyle Shanahan looks like a guy that you try to avoid any small talk with. You ask him how's it going and he'll let out a deep sigh and start unloading all the horror show collapses he's had in the playoffs the last 5 years. One simple question and you're stuck in a 2 hour conversation about 28-3 and Jimmy G and run/pass splits. We need to get Kyle Shanahan a Super Bowl, I love him as a coach but I worry about him as a human. A man can only withstand so much.

Sidenote - One of the hundreds of things I love about Frank The Tank is that if you ask him how's it going he'll answer but not ask back. Its the perfect human interaction. No need to trade back and forths. Almost every day starts like this

Me - How's it going Frank

We need more Frank the Tanks in the world. 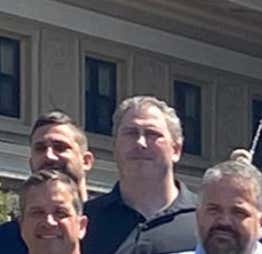 Now full disclosure Arthur Smith has been on PMT and I consider him a friend so lets establish that fact. Now that that's been said, my guy needs to get a pass to the local tanning salon before next years picture. Is he translucent? I actually didn't even notice him there at first glance. It looks like he's a ghost. And I mean that literally. Like in 50 years there will be an Arthur Smith look alike who makes it big in Hollywood or something and this picture will go viral and Buzzfeed will be like "Is This New A-List Actor A Time Traveler? Because We Uncovered This Picture Where His Ghost Appears" and it will be this picture. 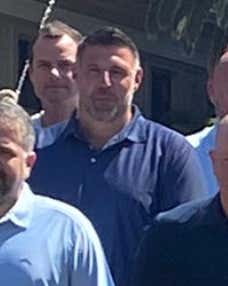 Excuse me, that's Coach Of The Year Mike Vrabel.

The "Thanks For Dressing Up" Award - Kliff Kingsbury

Kliff Kingsbury is the guy who looks good in anything he wears and knows it. He's also the guy who takes off his T-Shirt any time the weather gets above 45 degrees to show off his 6 pack and says "I just don't like wearing shirts, the fabric is uncomfortable". As if humans haven't been wearing t shirts for hundreds of years. We get it dude, you're good looking. No need to run up the score by showing up in sunglasses and shorts. At least McVay won a Super Bowl and earned the right to flex. Your Quarterback probably just unfollowed you on Instagram for the 10th time this offseason. 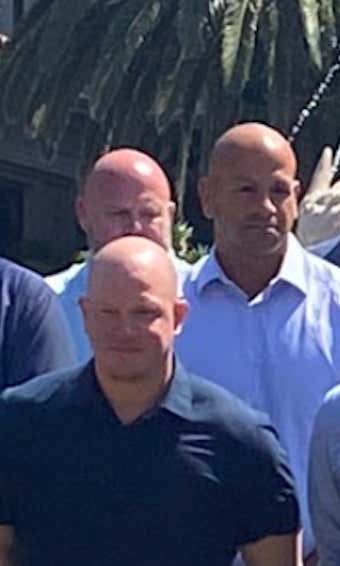 Genius move by these guys. Stick in a pack and you all blend together. No one says hey there's that bald guy when its a trio of bald guys who could all beat you up. Also extra credit to Daboll for knowing his role as a rookie head coach and hiding in the back. Already had enough attention this offseason when everyone found out he was saved as "White Brian" in Belichick's phone.

Full disclosure, I'm an undershirt guy myself. Partially for back sweat, partially because I need an extra layer of cloth to try and hold in my breasts. So I'm speaking from experience when I say this, this right here is every undershirt guys nightmare. You have to double check before you leave the hotel room. You have to stand under a bright light in the bathroom and make sure your beater isn't visible to the naked eye. It's a clown look. And I like Mike McDaniels. The glasses give me a Trestman vibe but everything else about him seems like a really nice guy and the makings of a very good coach. The undershirt though? Major major mistake. These are the things legacies are built on. Bad start Coach. Bad start. 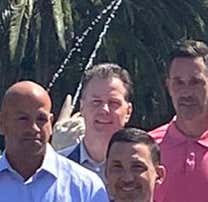 Lot of new faces this year and to be honest a few guys I've never seen before in my life. Too lazy to look this guy up but God bless whatever shithole franchise hired him. He looks like a third generation funeral home owner. He'll get Nana into a great cedar casket for a discount.

It's an absolute travesty that Andy Reid got stuck in the back this year but I can tell he's got his Tommy Bahama on even behind McDermott. This is what I want out of a Coach. I want a Coach that LOVES football. Eats, sleeps and breathes it. But the 2-3 weeks a year he's not coaching ball I want him to basically live every day like he's going to a Jimmy Buffet concert. Andy Reid and Ron Rivera know how to recharge the battery. They know that this is the one trip a year where they can say they're working while also be at poolside happy hour every single night. I trust these men with my life.

Bonus Andy Reid throughout the years because this year left us all wanting more. 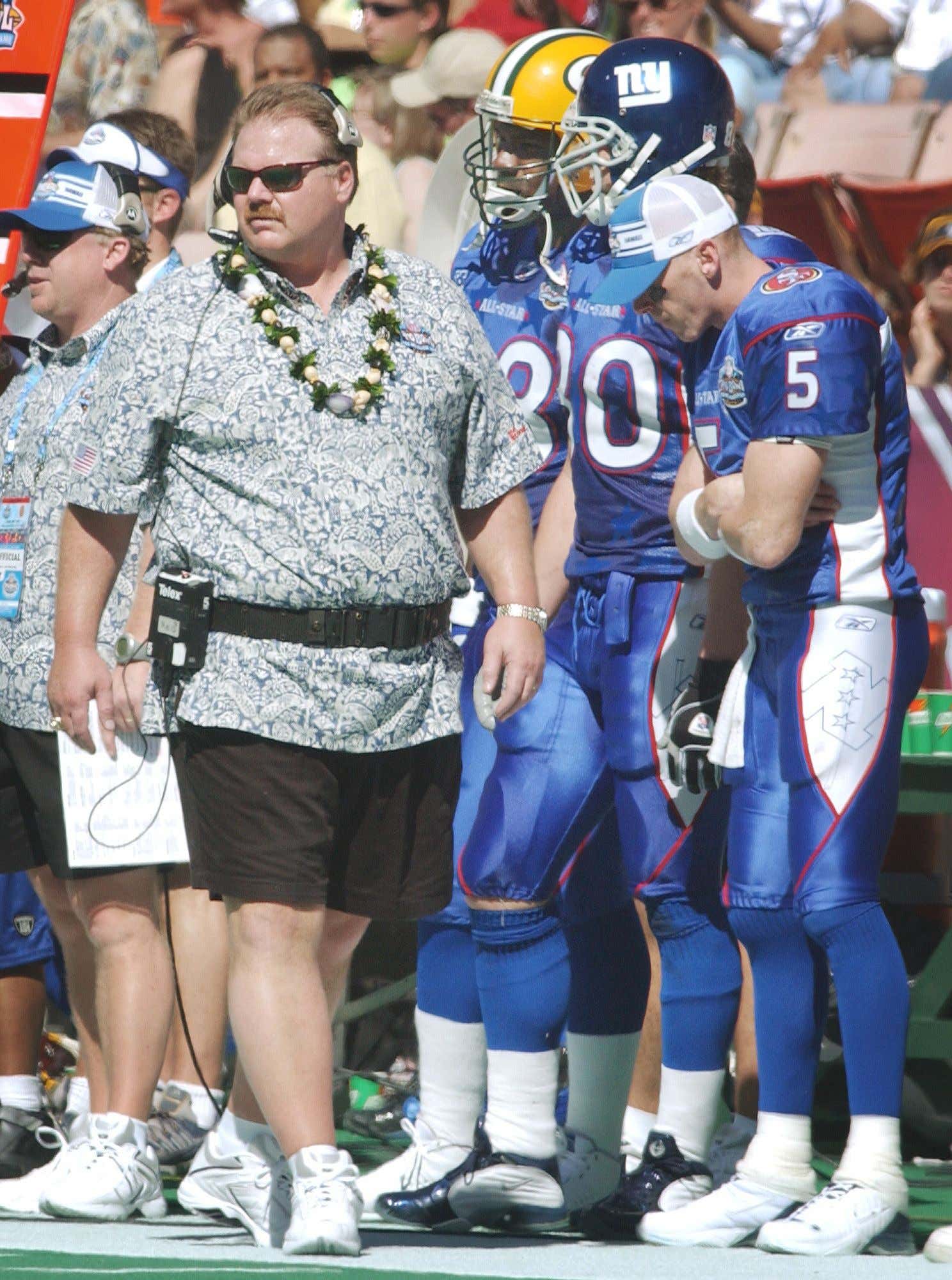 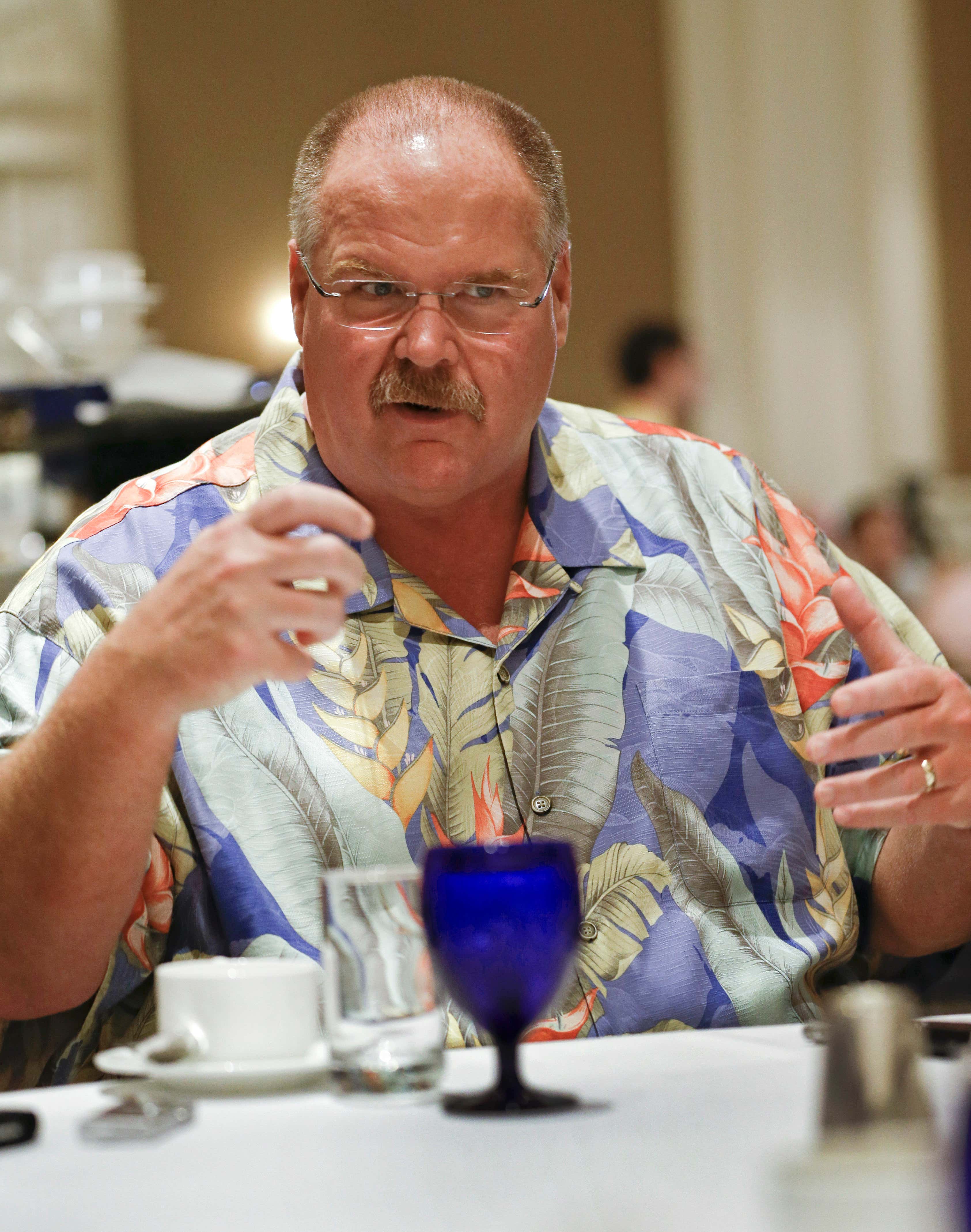 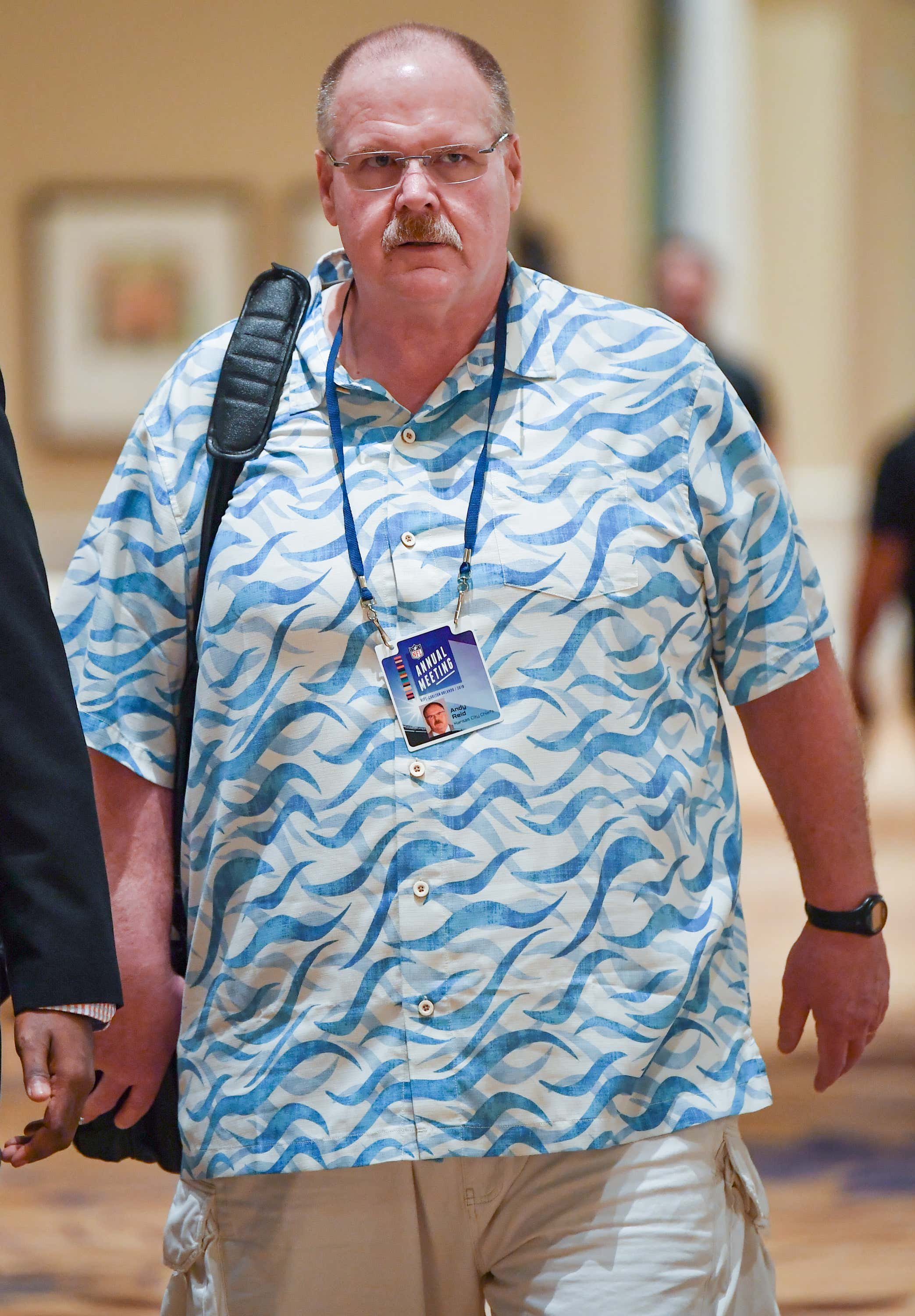 I've become a big Mike Tomlin fan over the years and this picture says it all. He doesn't need to peacock in front like McVay. He doesn't need to dress in shorts like Kingsbury. He knows that even in the back he's the coolest guy in the room. Plus he just signed a Franchise Quarterback for like 10 million a year. Mike is living the good life. 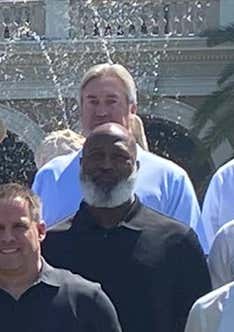 Oh yeah, I forgot both these guys got hired back to teams. Good for them. Like them both for different reasons but Doug Pederson's dad visors and Lovie's Santa beard are a very nice addition to the sidelines this Fall. Welcome back, guys.

Everyone knows this guy. The Blazer/Sneakers combo. He's the guy that goes on a week long sales conference and treats it like a Bachelor Party in Vegas. Wears his lanyard to the bar to let everyone know this is technically a business trip, then proceeds to buy 15 shots of tequila and by 9 pm is saying things like "should we low key hit up a strip club?" while in the company of a bunch of female coworkers. A great guy to have around for a night. But by Thursday you're avoiding him at all costs. 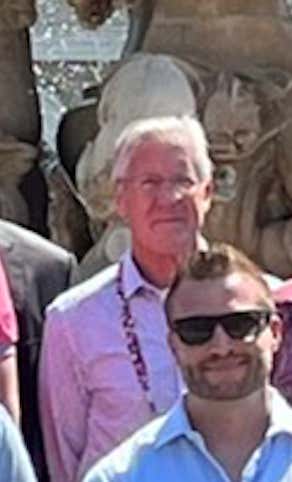 If Pete Carroll ever wants to retire he has a future in Merrill Lynch ads where he's reading a newspaper in his sun drenched kitchen, sipping a glass of orange juice, as his wife comes over and gives him a light back rub and whispers "It will be ok honey, the market will bounce back".

Frank Reich is walking around Florida just praying no one says the words "So, Carson Wentz". He's wearing it on his face. Just let him be. 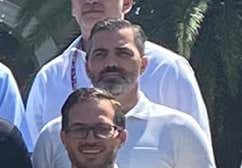 Everything I just said about Frank Reich goes double for Kevin Stefanski. You say the word Quarterback around him right now and he'll probably ask you to speak to the team lawyers.

Finally last but not least.

Look at John Harbaugh. That's a dad that has been around the block. He's got his notepad in case he needs to take down some notes. He's got a fleece quarter zip in FLORIDA, why? Well what if it gets cold at night? Bet you would feel pretty silly in that t shirt if the temperature drops below 65. I bet if you asked John Harbaugh if he had a screwdriver he'd whip out a flathead and Phillips. Need a bandaid? Come with John Harbaugh, he's got a first aid kit in the back of his Volvo station wagon that has 250k miles on it but why would he get a new car if this one still works fine? That's a calming energy right there. I think I'm going to put a future on the Ravens to win the Super Bowl right now. 22-1. Put it on my card.