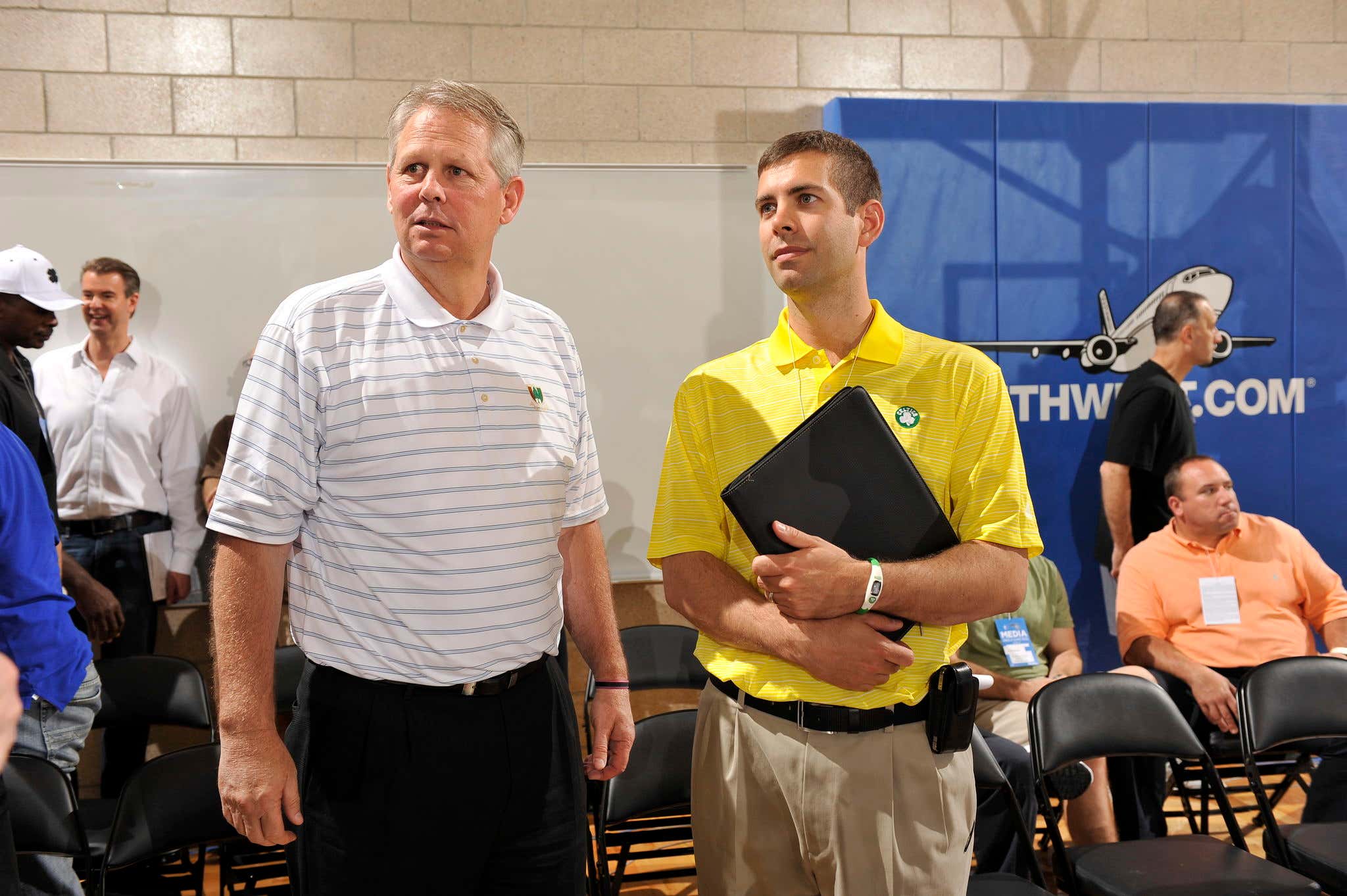 When the Celtics lead over the Jazz last night hit 32 points, a thought suddenly popped into my head. We all love what we're seeing about the Celts right now. How could you not? Everything from Ime's system and rotations to the player's execution of that system has been as close to flawless as you can get for over nearly half of their season. Everyone involved from the coach to the players to Brad deserves credit for what we are watching.

You know who else does? 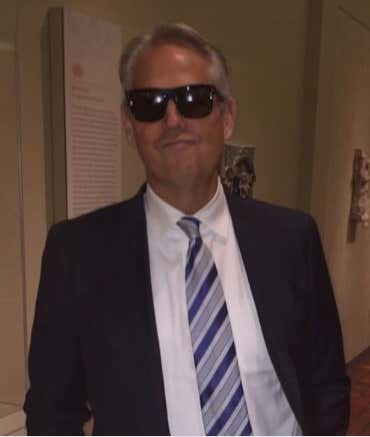 That man. Danny Ainge. You could make the case that everything we love right now with this team all points back to the decisions made by Ainge. I know towards the end of his tenure there was this narrative that Ainge actually screwed this franchise over. That he fumbled what was a prime opportunity to build a contender. He wasn't perfect, there were some mistakes along the way just like there are with every GM in the league. This also isn't to take away from the work Brad/Ime/the players have done in terms of their development, but just go down the list

Was this the most popular choice at the time? Depends on who you ask. The 6/7 range is where you saw Smart be in mock drafts leading up to the draft, but there was certainly some chatter about not picking Julius Randle or Zach LaVine back then. Instead, Ainge brought in someone who would soon become the lifeblood of this franchise. The heart and soul if you will. Not only that, but a pretty damn good two way player to boot.

You could also include Smart's first extension which kept him in town long enough for this most recent extension. Thank you Danny.

This was most definitely not a popular decision at the time. In fact, Celts fans booed the pick at the Celtics Draft Party. Everyone wanted to know why Ainge took another player who "couldn't shoot". You know why? Because he knew the formula to success is versatile two way wings. Jaylen was the first piece to that puzzle. How does that decision look now?

Again, Tatum was not the consensus #1 pick to basically the entire basketball world other than Ainge. He knew the Process was desperate to not be pathetic anymore, so he took advantage and got the best player in the draft AND a pick. Now I don't want to get too ahead of myself here, but that pick looks to be a slam dunk.

So much of the shit people try and give Ainge is this idea that he can't draft later in rounds. As if every single player selected in the 20s and later is some sort of All Star. Let me ask you something though. In the 2018 draft, how many centers are better than Robert Williams? Here are the candidates: Deandre Ayton, Mo Bamba, Wendell Carter Jr, Mitchell Robinson, Thomas Welsh

I'll concede Ayton, he's been a monster. He's also the #1 pick. Rob went 27th. You could make the case that Ainge found the second best big man (PF or C) in the entire 2018 draft and he did it with a late 1st round pick

In today's NBA, you need versatile small ball 5s. Guys who can stretch the floor but also hold their own against a variety of positions on the defensive end. Grant, the 22nd selection of the 2019 Draft has become exactly what that role requires. He was solid his rookie year, awful in Year 2, and now in Year 3 is a legitimate weapon. He allows Ime to play whatever style he wants. Go small to match speed? No problem, insert Grant as a small ball five and you're good. He has turned into the player I'm sure Ainge was hoping for when he made that pick.

Another late first round pick that surprised a lot of people when it happened. The roster needed shooting, so Ainge went out and found that shooting. For those not aware, Payton Pritchard is a career 41% shooter through 1.75 seasons. He was taken 26th. Of all the players taken in the 2020 NBA draft who shoot threes on a consistent basis, only Desmond Bane is shooting at a higher percentage (42% vs 41%). So, essentially, Danny found this roster one of if not the best shooter in the entire class.

This is where you may think I'm crazy, I get it. But don't be so closed minded. If Ainge never gives Kemba that deal, there's no 2021-22 Al Horford. That shit was so bad for a declining player that there was only one team on the planet willing to take that deal, and it just so happened to bring back a major impact player in Horford. That trade was Brad, but he can't make that trade unless Ainge gave Kemba that panic max once Kyrie left in the first place. You're welcome.

8. Not trading for Myles Turner

This is around when people started to have the take that Ainge was actually screwing the Celtics over. How many times did you hear "AINGE LET HAYWARD WALK FOR NOTHING! HE FUMBLED THAT WHOLE SITUATION"

By my count, a billion times. Well here's why Ainge's decision clearly was the right one. Not doing that move gave him the Hayward TPE. That TPE resulted in Brad having $11M of it to spend this past summer. He used that to bring in Josh Richardson. Josh Richardson and Romeo (another Ainge decision) brought this team Derrick White. A player who helped unlock a style of play that makes this team and roster virtually unbeatable. If there's no TPE, there's most likely no Derrick White. Who knows how Rob develops next to Myles Turner rather than Al Horford.

White gives Brad and Ime both roster flexibility for the now in terms of lineups, and salary $ flexibility to potentially be used in a bigger deal down the road if that opportunity arises.

We had to get Brad into the organization somehow, and it was Ainge that targeted him way back when. Once Doc left, nobody was thinking Brad was going to be the guy. That was one of the craziest Woj bombs ever and now look. A successful coach has immediately slid into what looks to be like a successful GM. He'll probably be a part of this team for as long as he wants the job, and who on the planet is complaining about that?

Was he retiring? Was he fired? Who gives a shit. But Ainge's decision to step away is what allowed Brad to do all these things that have helped build this wagon of a 2021-22 roster. That's not possible if he's still the coach because it's very clear the two had differences in terms of roster construction. Brad doesn't give a shit about trading picks, which is something Ainge almost never did.

Not only that, but this decision also brought us Ime. A coach who has clearly found a way to maximize this roster in ways we're not sure if Brad ever could. Players can relate to him. He's walked the walk. He's tough and willing to call the players out on their bullshit and they've clearly responded. That doesn't happen if Ainge is still upstairs.

11. Never split up Tatum/Brown for a win now star

This is BY FAR the most important piece. For years we heard how Ainge had to trade Jaylen or Tatum for a win now superstar. It was Jimmy Butler, Paul George, Anthony Davis, and year after year Ainge remained stubborn. He never even entertained it. With that came all the hit pieces about how he wouldn't stop sitting on his hands. We get to experience the prime of both Jaylen Brown and Jayson Tatum because Ainge stuck to his convictions with those two. That alone might just absolve him of every mistake he ever made.

So, looking back, maybe Ainge's drafting actually isn't so bad? We'll see what happens with Aaron Nesmith, but recent history suggests that pick has a good chance of working out. Maybe his final few years weren't as catastrophic as the doomers made it out to be? It's why with all this stuff patience is crucial. Things take time to develop and I can't help but think Ainge is watching this all unfold like a proud parent.

I sure as hell am thankful for these decisions, because without them who knows where this franchise would be.