This Navalny group is wild man.

Talk about balls of fucking steel.

In a country where an Instagram model spoke out against the Russian invasion of Ukraine, and wound up dead in a suitcase last week, these guys and girls spare no details. They have zero fear.

Fortune - The yacht, currently moored in the Marina di Carrara on Italy’s Tuscany coast, is gargantuan, even by the outsize dimensions of Russian oligarchs’ superyachts. At about 459 feet long, it has six levels of decks, two helipads with a hidden helicopter hangar, a spa, huge living room and dining room, a swimming pool and three saunas, as well as an upper-level “owner’s area” that includes its own private spa.

For weeks, there have been questions about who owns the superyacht, which is registered in the Cayman Islands through a shell company. But on Monday, the group headed by jailed Russian activist Alexis Navalny claimed in a YouTube video that the vessel belongs to Putin himself.

“On paper, it belongs to no one, and sits quietly in an Italian port,” the video says in Russian. “Watch the video, and you will find out how Putin owns this yacht through figureheads, and how we can take this yacht away from him.”

The boat's name is Scheherazade.

Fun fact - In the legend of Tales From the Thousand and One Nights, "Scheherazade" is a beautiful virgin who escapes being murdered by the king by telling him stories at night.

Just a couple weeks ago the New York Times suspected the yacht was one of Putin's oligarch friends that was being snuck out of Russia to avoid being seized.

They even questioned the captain. (Who is British)

The ship’s captain, Guy Bennett-Pearce, a British national, denied that Mr. Putin owned or had ever been on the yacht. “I have never seen him. I have never met him,” he said. He added, in a phone interview from the yacht, that its owner was not on any sanctions list. He did not rule out that the person could be Russian, but declined to say more about the owner’s identity, citing a “watertight nondisclosure agreement.”

The only problem with the captain's story was it stank like rotten fish.

As soon as the yacht docked in the small Italian port town of Marina di Carrara (near Milan) it was shrouded in mystery.

The ship's crew erected a metal barrier on the pier to keep onlookers from seeing it for one.

They also draped a panel over the name on the bow to keep people from identifying it, so no one knew who it belonged to.

So doing what the Italians couldn't (or wouldn't) do, the Navalny group got smart.

The group obtained the manifest, or all-Russian crew list for the yacht, and found that almost all of them were employed by Putin’s security detail, the Federal Protective Service, known by its Russian acronym FSO. 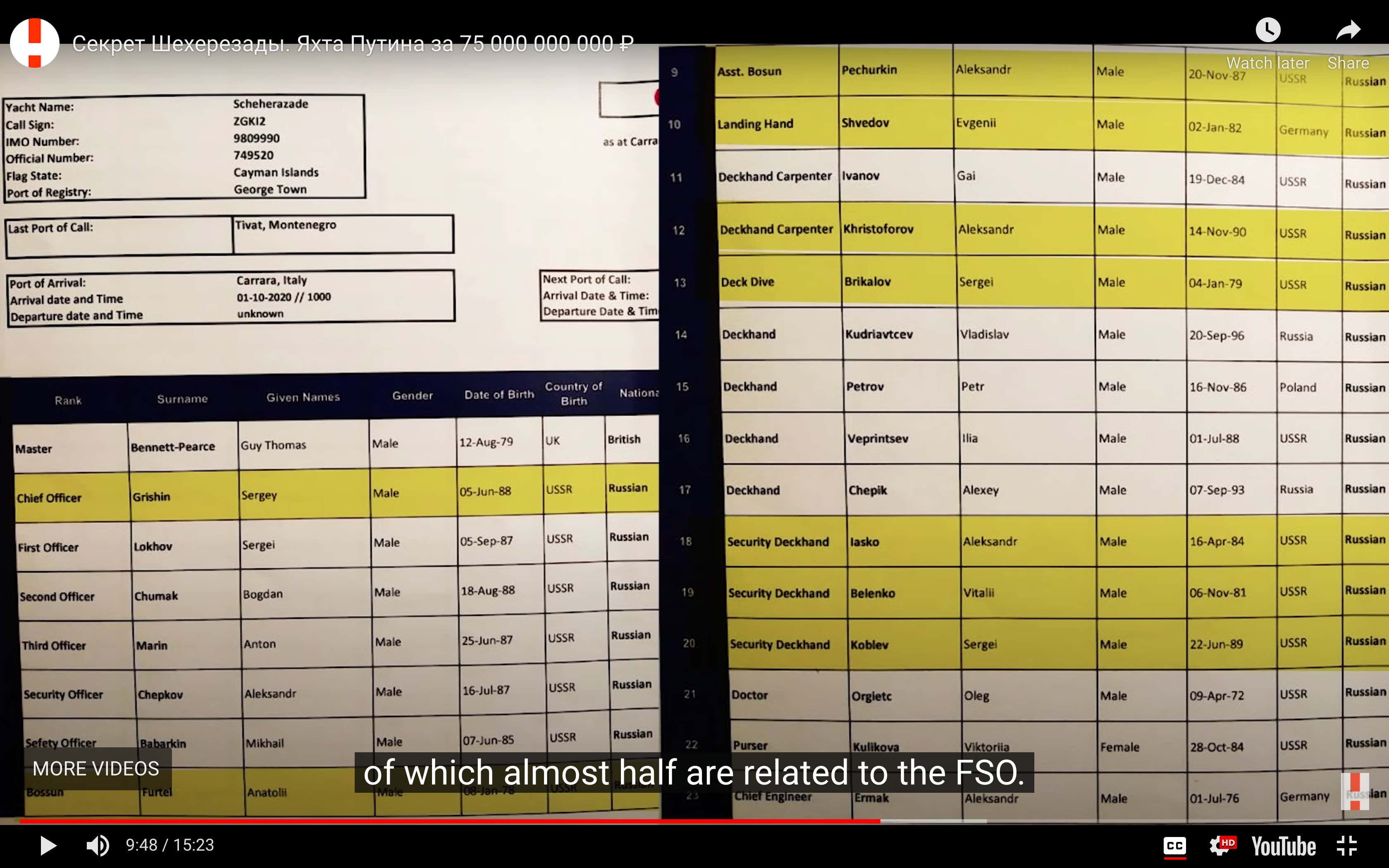 This service is pretty much Putin’s personal security, or as the group described “the agency that protects Putin and organizes his life.”

This guy is something else man.

I know business owners who operate their businesses like personal piggy banks, dipping into the cash registers and rings at the end of the night pulling out cash for their spending money, using labor like their busboys to do their housework and off the clock stuff, and shit like that.

But a dictator using his entire country’s economy as his personal piggy bank, to make himself one of the wealthiest human beings in the history of civilization?

Western governments have supposedly been attempting to track down Putin’s true wealth, which some estimate claim could amount to some $200 billion!

Now how about we take a peek inside this baby.

For starters, the shitters are flanked by 14k gold toilet paper holders.

And worst part, it looks like he has his slaves load the roll with it falling in the back not the front like real men do. (Classic Vlad)

Guy probably stands up and wipes back to front too.

“Every surface is either marble or gold,” an unnamed boatbuilder told  of the glitzy vessel, which the worker finds especially obscene in light of current events.

This shit bag’s vessel has “a 16-foot aquarium, multiple televisions — including a 15-foot beast spanning an entire wall — and a self-leveling pool table so that guests can play even when the sea turns turbulent.”

A self leveling pool table…

He’s also got a full blown nightclub on this thing. Because who doesn’t need one?

The boat also has a full hangar that can house a helicopter, six Jet Skis, five dinghies and eight Seabob underwater scooters.

Scheherazade can also allegedly transform from a party boat to a battleship in a flash with a state-of-the-art security system reportedly capable of shooting down drones.

Can only imagine the level of anti aircraft guns this thing is equipped with.)

His apologists can defend him all they want, and come for me, I don’t care. This guy is scum. The world will be much better off without him in it. Hopefully the rumors of his oligarch buddies conniving to assassinate him are true and it happens sooner than later.