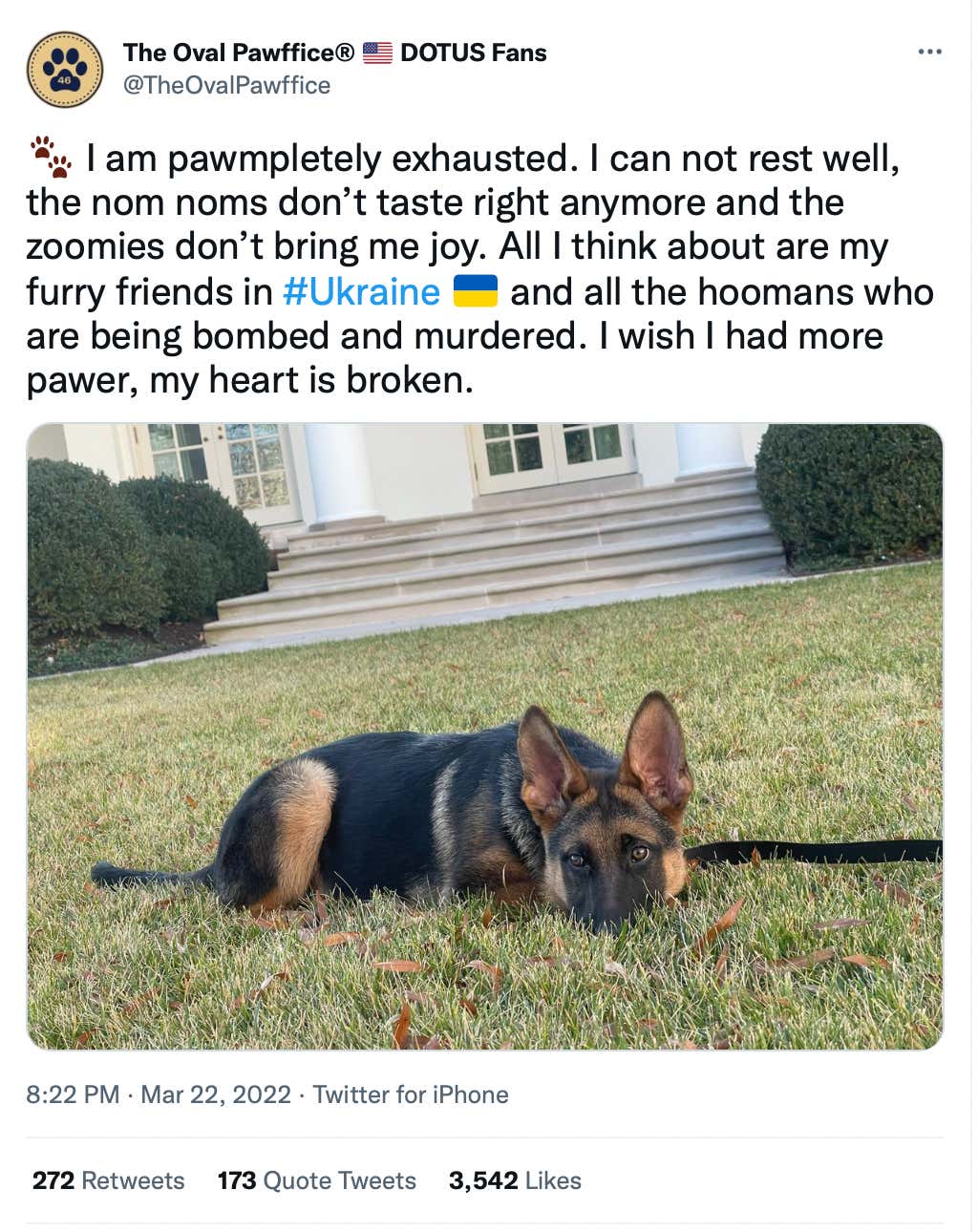 I hated this so immediately in such a deeply visceral way that after a brief paws I decided it had to be a joke.

"Oh I get it, some parody account is pretending to be the worst, most annoying, tone deaf version of a Presidential pet account ever because nobody would really tweet this seriously ha ha."

Of course I should have known better.

To clarify, the account is just a fan page for the President's pets & isn't actually operated by the White House or affiliated with the President, but I don't care. It's too late. Commander is ruined forever. Bring back Major, the bitey one, and place a pair of sunglasses made of Beggin' Strips directly over my eyes so that I never have to see that Tweet again.

The account's Twitter bio takes you to their website, which also somehow found a way to make me queasy even though it was just a few paragraphs about lovely donations to animal charities in need:

Friends, we are happy to pawnnounce that in 2021 we have donated $13,077 to pawesome animal welfare orgs we love. Our store is temporarily closed, but we'll be back soon with a VARIETY of pawbulous NEW PAWDUCTS. That way, hoomans can shop for more than cups and bandannas, thus enabling us to raise more money for the animals in need. Awooooooof!

How this works: most of the pawceeds from the pawducts you purchase will go to an organization that helps protect, save and heal animals, domestic and wild.

I could only get through reading that because I did so in a generic South Park character's voice. Speaking of characters, the ones in the replies were quick to make it much worse.

I know, I know… they mean well.. but these are all real people giving genuine responses and I…

Mostly all of us love dogs & cats, but there's an edge some folks go over with the 'dog talk' where I have to check out. Hoomans, doggos, puppers, pawsitive… If you use them occasionally like a fine seasoning, still not great, but I can stomach it. If that's the only language you speak though? Immediate red flags. That type of person would come across my car flipped on the roadside & climb over my dying body to get to the cat's travel cage. Which is appalling because Spork doesn't seem to care about the puppers & hoomans suffering from the bombies in Ukraine at all.