This is why we wake up early on Sunday mornings!! The first race of the 2022 F1 season delivered all of the chaos that you love to see. It was the debut of the brand new regulation cars and they lived up to the hype giving us fantastic racing the entire grand prix. This truly is a new era in Formula One and holy shit are we in for a great season. 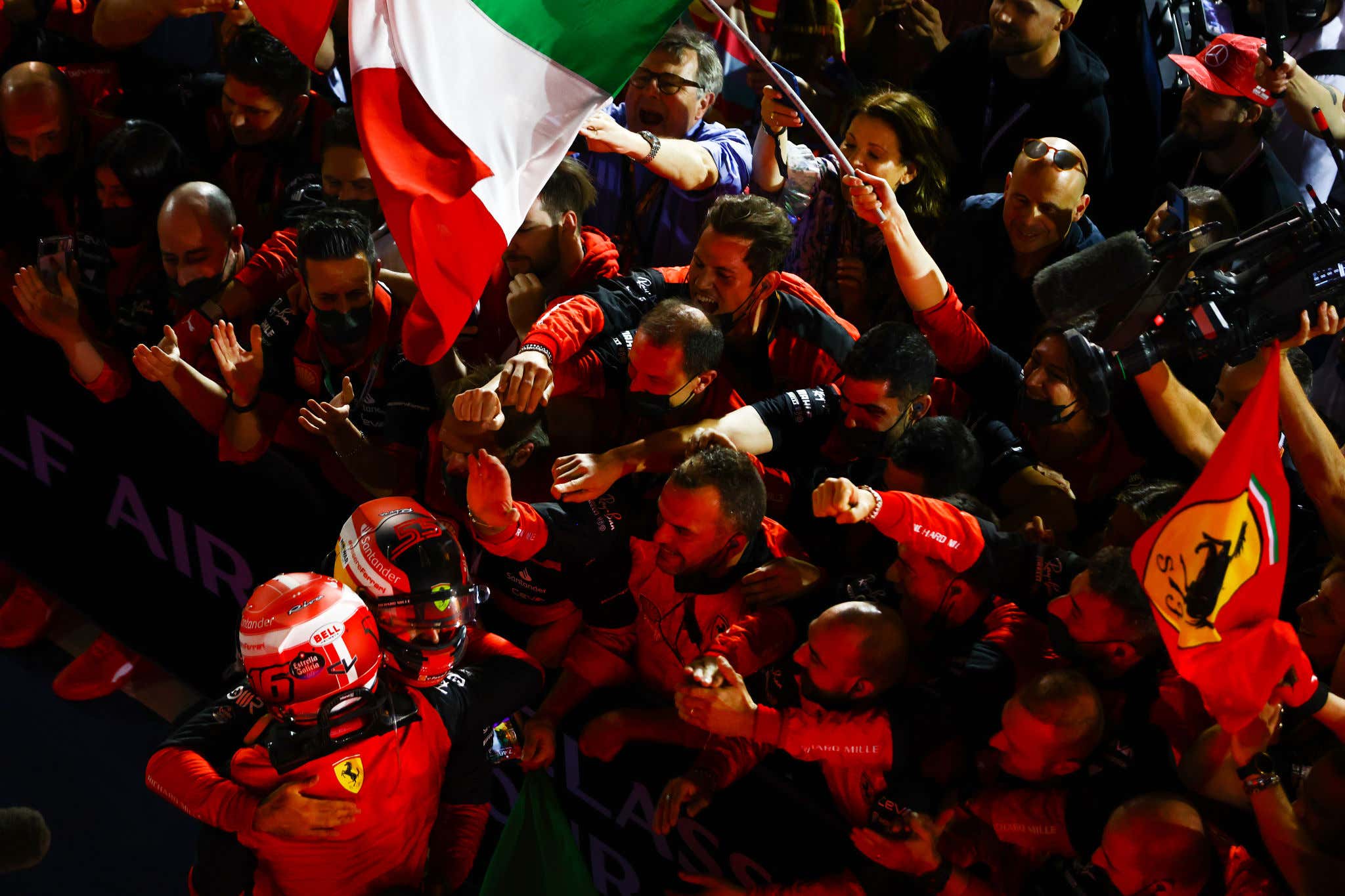 Last year's season was dominated by Mercedes and Red Bull with Ferrari and McLaren fighting for a distant third place in the Constructors Championship. This year, things are different. Ferrari is officially BACK. The Ferrari Golden Boy, Charles Leclerc, didn't put a foot wrong all weekend winning pole on Saturday and holding off Max Verstappen on Sunday to win the third race of his career and first win since 2019. Right next to him on the podium was teammate Carlos Sainz Jr. who capitalized on Verstappen's car breaking down to jump into second place. The prancing horses are now the team to beat this year in the paddock. What a weekend for the Scuderia, they couldn't be more BACK. 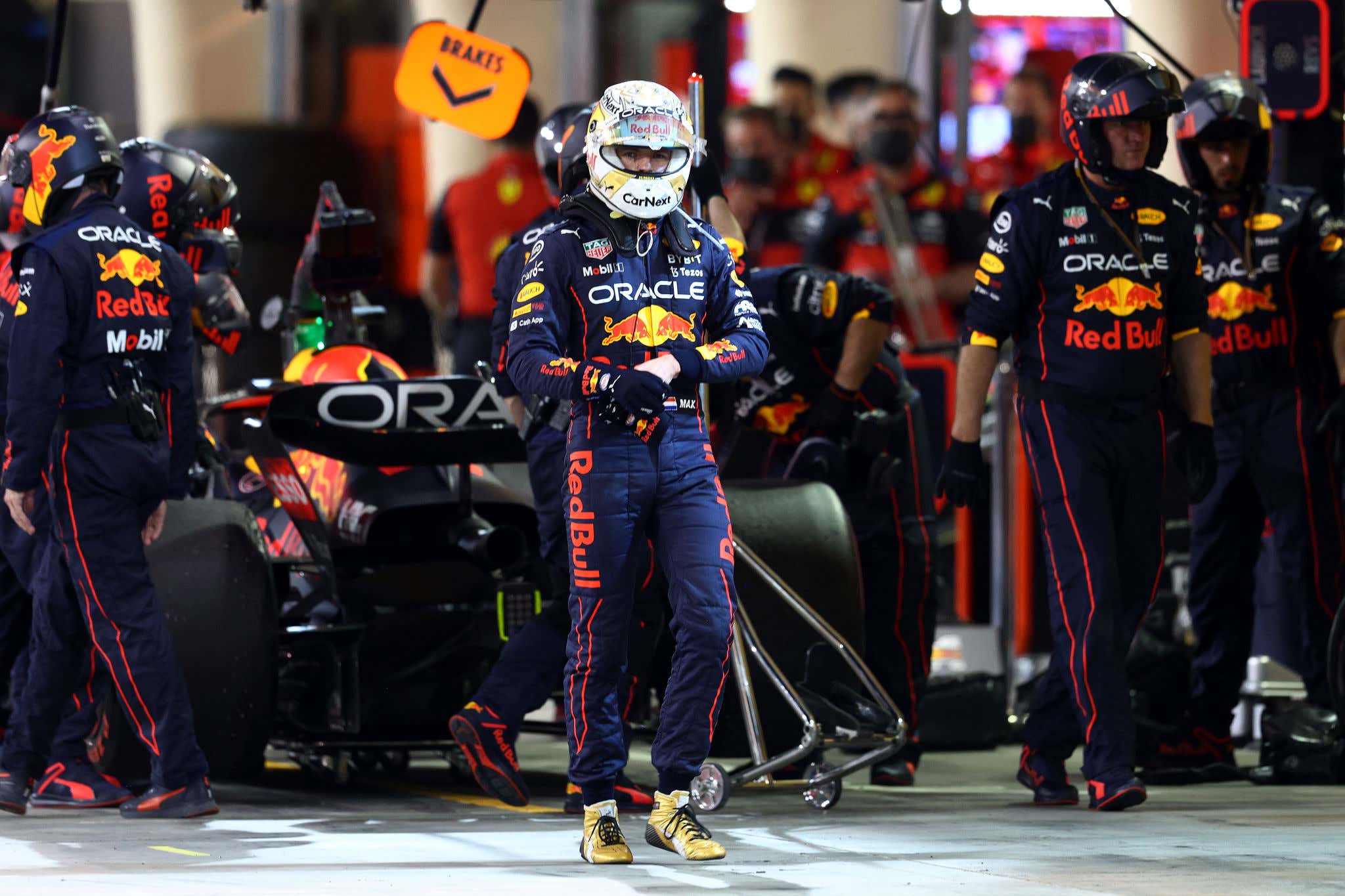 While Ferrari belted the Italian national anthem on the podium spraying champagne on each other, there was complete devastation in the Red Bull garage. Verstappen started the race P2 and the team was hopeful that they would be able to continue their momentum from 2021 into this year. They had a chance to steal the win from Ferrari on lap seventeen when Verstappen made his move to pass Leclerc.

Everything we've heard over the past year about the new car regulation coming in 2022 were that it was going to give us better racing and more battles on track. These three laps proved that everything they were promising us was true. This is why we watch racing, two drivers pushing themselves to the limit lap after lap to pass each other for the lead of the race. You can read F1 experts for months breaking down all of the technical changes, but to see Leclerc and Verstappen go blow for blow on track was the moment where the the nerd finally let down their hair, took off their glasses, and revealed their true beauty. I could only dream that this day would come when we were in the darkest moments of the HAM - BOT - VER era back in 2020 and it's finally here. SOAK IT IN.

With fifteen laps left in the race, it looked like it was going to be a runaway victory for Leclerc who had built up a comfortable lead over Verstappen. Red Bull also looked comfortable with Verstappen in P2 and Sergio Perez in P4. That's until we got our first caution of the night, which threw the entire race into chaos. Pierre Gasly's Alpha Tauri car caught fire which led to a safety car that bunched up the pack for the end of the race.

During the caution, Verstappen started complaining on his team radio that his car was experiencing issues, but the team tried to re-assure him that his car was fine. When the race restarted, Leclerc easily held onto his lead and Verstappen's car took a turn for the worse, which forced him to retire the car in pit lane. Two laps later, the other Red Bull driver, Sergio Perez, ran into the exact same issue as Verstappen, which led him to spin out on track. Red Bull went from a solid P2, P4 result this weekend to two DNFs and zero points. Somewhere on pit lane, Red Bull Team Principal, Christian Horner, was screaming into a Netflix camera "Bloody hell for fucks sake" as the team's nightmare scenario came true. Pure chaos to end the first race of the season.

The Red Bull cars retiring moved Sainz into second place and Hamilton into the final podium spot. Sainz was in the mix the entire weekend, so it wasn't a shock to see him finish in second. However, Hamilton finishing this weekend on the podium was a surprise. The Mercedes car looked a step behind Ferrari and Red Bull all weekend, but Hamilton is considered one of the greatest race car drivers of all time for a reason. While the car didn't have the pace to compete for the win, he managed to keep the car in contention the entire race which paid off at the end of the day.

Mercedes and Hamilton right now don't look like they'll be fighting for another World Championship, but it is a LONG season. The German manufacture has won eight straight Constructors Championships. They know how to adapt and solve problems throughout the course of a season. They still have a lot of work to do to get their car up to the same pace as Ferrari and Red Bull, but don't count out Mercedes and Hamilton just yet.

What a moment for Scuderia Ferrari. The team has been battling to return to it's former glory after a rocky few years and it finally looks like they have put all of the pieces back together. If you're new to F1 and wondering why Ferrari fans like myself are losing our minds right now, this is the best comparisons.

So many pre-seasons full of hope only to have our soul crushed year after year. Don't worry, there's still twenty one races left this season, so there's plenty of time for Ferrari to destroy our hopes and dreams again, but right now we've never been flying higher. Time to get the tattoo: "Ferrari 2022 World Champions"

While Ferrari were the big winners this weekend, we also got our first real look at how all of the other teams are shaping up this season. The other winners of the weekend were Haas and Alfa Romeo. If you followed F1 the past two years, it was shocking to see those two teams battling inside the top ten today. Haas has gone through a massive transformation this off-season. The Mazepin's and Russian money are gone due to recent world events and the team has never looked stronger. Kevin Magnussen who got the call up last minute to replace Mazepin on the grid, finished the race in fifth place, which is the team's best result since 2018. One of the best parts about F1 is that not everything is about who finishes first. For teams like Haas, who have been through years of turmoil, a race like today is a massive win. Tell everyone you know, America's team is BACK. GUNTHER STEINER YOU BEAUTIFUL BASTARD!! FROM A BUNCH OF WANKERS TO A BUNCH OF LEGENDS!!

Another team that has struggled over the past few years is Alfa Romeo. This year appears to be different with the team having a strong weekend. Bottas finished in P6, only two spots behind his former team, Mercedes. Rookie Zhou Guanyu in his first F1 race finished in P10, a very strong performance.

This is an awesome result for the team, especially for Zhou. There was a fair amount of criticism about Zhou being picked to be the second seat at Alfa Romeo, because many people believed there were other drivers more deserving. He proved the haters wrong real quick in his first race. Somethings, somethings…

On the other end of the spectrum this weekend was McLaren. After a very strong 2021 where the team looked like it was ready to make the next step into title contention. They went out today and absolutely shit the bed. All throughout the winter, the team battled reliability issues leading to less time on track to figure out the car. On top of that Daniel Ricciardo missed the last week of testing due to Covid. Those issues showed this weekend and the McLaren car was FAR away from being in contention. Ricciardo spent most of the day battling for last place and Lando Norris wasn't far ahead of him. A nightmare start to the season for McLaren. If you're a McLaren fan you're hoping that the team can work out the kinks these next few weeks to try and get back into contention in the midfield, but as of right now it's looking not great!

There's still so much more to digest from this first weekend of the 2022 season. I'll be talking about it all week on Twitter, so if you want to talk about F1, drop your take here and give me a follow.

What a great start to what looks like will be another epic season for the sport. It's incredible to see how much the sport has grown the last two years. I can still remember tweeting about F1 in 2018 to a ghost town, so to now see the Twitter timeline on Sunday mornings full of people living and dying with every lap, it is truly unbelievable. Let's keep growing the paddock this season together and get more people to fall in love with the beautiful world of F1.

You don't have to wait long for the next race, next weekend the circus heads to Saudi Arabia for the second race of the season. Can't Wait. Finally, if you're looking for a F1 betting expert to responsibly tail this season, we found a guy…

IT'S LIGHTS OUT AND AWAY WE GO TO THE SAUDI ARABIAN GRAND PRIX NEXT WEEKEND!!