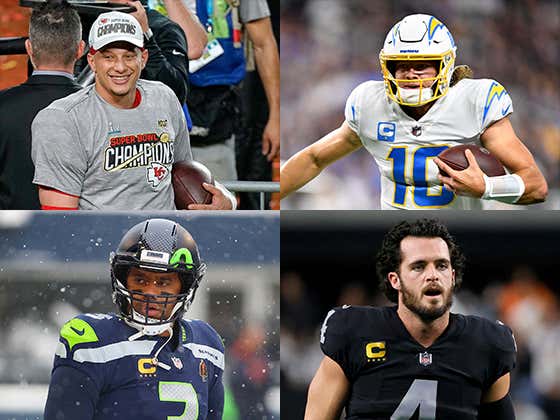 ICYMI, the AFC West is the best division in football without a shred of doubt. It was so after the Wilson trade, and it has only become more apparent since then. Let's go over the moves made so far.

- Khalil Mack(Via Trade): Mack is, simply put, a monster. He has been one of the best pass rushers in the league over the last few years, and was the #1 rated EDGE in the 2020 season. #2 on that list? Joey Bosa. The biggest concern will obviously be his foot injury from last year and how he rebounds from it. I have great faith in what he will do this year while being reunited with his old DC in Brandon Staley.

- Mike Williams(3/$60 Million extension): Williams had the year of his life in year one of the Lombardi offense and it couldn't have come at a better time for him. This deal is solid for both sides as long as he stays healthy, which is obviously a concern since he hasn't started a full season yet in 5 years with the Chargers.

- J.C. Jackson(5/$82.5 Million): This is the signing that I think I'm most nervous about. The Chargers record with FA DBs is poor outside of Casey Heyward, but man, Jackson was nothing short of a monster for the Patriots. He had more interceptions himself than the entire Chargers as a team had combined last year, and he actually signed for less than most analysts were projecting. This is a huge win for a team that STRUGGLED with Chris Harris Jr. as a CB1.

- Sebastian Joseph-Day(3/$24 Million): Like Mack, SJD gets to reunite with his old DC in Brandon Staley. He is fresh of a pec injury, but has having a very solid year right before that. He should be an excellent piece to replace Linval Joseph and be the meat of the Bosa/Mack sandwich.

- Austin Johnson(2/$14 Million): The Chargers were absolutely obliterated on the ground last year and Johnson looks to help fix that. He was a reliable in that area for the Giants and should do the same for the Bolts.

- Josh Harris (4/$5.6 million): No disrespect meant to long snappers, but I don't get this. Harris made the pro-bowl this year but is he worth that much money in a very important free agency? Overton seemed to be solid last year and I can't imagine it would be hard to find a decent enough UDFA Long Snapper.

- Re-signed Storm Norton(unknown): Norton was abysmal last season in most of the games he played in. I don't mind having him as cheap depth, but man I hope not to see him start again.

- Re-signed Chase Daniel (1/$2.25 million): I love my chonk king and I'm happy to have him back. Now if only Staley would leave Stick off the active roster and make room for important positions…

- Re-signed Dustin Hopkins(3/$9 million): The Chargers obviously have had pure SHIT luck at the kicker position the last few years, but Hopkins entered and was nothing short of solid for the team. He was 18-20 for FGs and 30/32 on XPs. I'm more than happy with that level of consistency.

- Re-signed Donald Parham(unknown): Parham has been a really solid receiving TE for the chargers and had an incredibly scary concussion in the middle of the season. Cook will likely be gone, which makes Parham the #2 behind Everett.

- JK Scott(unknown): He's an ok punter, and Ty Long had a pretty bad year last year. There will probably be a few bodies fighting for this job in the pre-season.

- Gerald Everett (2/$12 million): Everett is athletic and good at both receiving and blocking. I would love for Hebert to have a top-quality TE, but I'm ok with GE at this price tag.

- Justin Reid(3/$31.5 Million): Their secondary is likely losing the Honey Badger, although with every day that passes it looks more like he could re-sign. He doesn't seem to be particularly great at getting turnovers, but he is good vs the run and solid in coverage. At that price, he's not a terrible deal at all.

- Juju Smith-Schuster (1/$10.75): Imagine the Jackson Mahomes tiktok collabs we are about to witness with this fella. JJSS isn't the star some people thought he would be, but I think he might surprise us this year. He's coming off 2 poor years that were partially hamstrung by a year of Mason Rudolph and Big Ben's retirement tour, and now he will go back to his more natural fit of WR2 alongside one of the best WRs in the game and the best TE/QB in the game.

- Andrew Wylie (1/$2.5 guaranteed): Wylie didn't play last year, but should be a solid depth guy for an O-line that has come a long way from their last super bowl disaster.

- Resigned Derrick Nnadi(unknown): Nnadi had a shit season last year, but is obviously familiar with the group and presumably came with a low price tag.

- Geron Christian(unknown): Another decent depth singing for their offensive line.

- Restructured Frank Clark's massive bummer of a contract: Clark has been a massive bust of a signing and I just assumed he was getting kicked out Jazzy Jeff style this year. I don't think he will ever live up to the contract, but maybe he's got a few more big plays left in him.

- Russell Wilson(Via trade): There is a lot to love about this deal for the Broncos. Wilson has proven that he can win when he has a strong defense to help him manage a game. The Broncos had one of the strongest defenses in the league last year, but they also lost the mind running it in Vic Fangio. Wilson had an incredible, MVP-adjacent 2020 campaign, but a relatively poor 2021 thanks partially to injuries. Wilson has also proven he can excel with a good rushing attack, and Javonte Williams has already emerged as one of the A-tier dual-use RBs in the league. It's obviously a huge risk losing 2 firsts, 2 second rounders, a 5th rounder your TE1 and DT1, but what is the alternative for the team? Trying to bridge the gap with below average QB play wont work when you have to play Mahomes/Herbert/Carr for the bulk of your schedule for the foreseeable future. This trade makes them a competitor in the most important position in football.

- Randy Gregory(5/$70 Million): Gregory was one of the better pass rushers over the past few years and gives Bradley Chubb a running mate after losing Miller. RG is also a great playmaker which is obviously something every defense needs, especially vs the QB talent in the division AND conference.

- D.J. Jones(3/$30 million): Jones will hopefully replace Shelby Harris, and had pretty solid numbers against the run and in pass rushing last year.

- Restructured Cortland Sutton & Tim Patrick's contracts: They saved $12.5 in space with this move and earned some extra room to get better weapons on both sides of the ball.

- Re-signed Deshaun Williams (1/unknown): He was one of the best run-stopping defensive lineman on a defense that was one of the leagues best run defenses.

- Re-signed Josey Jewell (2/$11 million): Every team needs LBs that can tackle and that's Jewell. He missed most of last year, but was really good vs the run in the year previous.

- Davante Adams(via trade, 5/$141 million): This was simply a MONSTER move. Adams is the best route runner in football and arguably the best WR in the league right now not named Cooper Kupp. His numbers are consistent as hell over the last 4 years and he gets to reunite with his old college teammate in Carr. The only worries would be that he is going into his age 30 season and has $65 million guaranteed, only a few million less than his QB. But as long as he is healthy, he will be producing. Pairing him with another one of the league's best route runners in Hunter Renfrow and one of the better Tight Ends in Darren Waller is a SCARY proposition. Carr has about every bit of help a QB could want there.

- Rock Ya-Sin(via trade): The Raiders needed to overhaul their secondary bad, and this is a good start. Plus, losing Ngakoue doesn't hurt bad after the next signing.

- Chandler Jones(Unknown,3 years estimated $17/): Jones' is still a very good pass rusher, but there is more to his last season than meets the eye. All of his value comes from his pass-rushing and had 10.5 sacks last year. 50% of those came in a 5-sack game in week one. So the numbers aren't consistent from last year and he is an awful run-stopper. BUT, you can't allow Crosby to draw double teams every play, and Jones will definitly get some attention opposite him.

- Maxx Crosby(4/$96 extension): Crosby is one of the best, pound-for-pound players the raiders have drafted in a long time. He's an extremely good pass rusher, a very solid run blocker and an excellent locker room guy. No way the Raiders could ever let him go. As long as he has a good pass rusher opposite, expect him to feast.

-  Bilal Nichols(2/$11 Million): This was a sneakily a great value deal for the Raiders. Nichols was good vs the run and pass last year for the Bears, and should be a solid piece to fill in the middle.

- Kyler Fackrell(1/Unknown): He was a solid rotational pass rusher for the Chargers last year and a pretty decent pickup for his position at this stage in free agency

- Re-signed Brandon Parker(1/unknown): Parker was as bad at RT as Leatherwood was before they switched him. Don't expect him to be much more than a depth guy.

- Anthony Averett(1/$4.5 million): He's a pretty decent DB and should help shore up a pass defense that gave up the T-5th most passing TD's last season.

- Mack Hollins(1/unknown): He was a solid depth WR for Miami last year and will fill that same role for LV.

- Jakob Johnson(1/unknown): After losing their FB Ingold in FA, he was the logical choice considering his connection with McDaniels while they were both in New England. He should be a great help to Josh Jacobs.

All of these additions come to already insanely potent passing attacks for the Chiefs, Chargers and Raiders:

The Chargers : 2nd in yards, 5th in touchdowns, 4th in completions

The Chiefs: 4th in yards, 6th in touchdowns, 2nd in completions

The Raiders: 6th in yards, 17th in touchdowns, 5th in completion

The Broncos were a different story since they struggled through Bridgewater's injuries and Drew Lock, but they will obviously improve under Wilson. Adding 5 former all-pro players to this division has turned an already bloody battle into an all out war. Make every game primetime because it's going to be must-watch television.