I’ll be looking at each region over the next couple of days as the NCAA Tournament gets ready to tip. We’ll look at matchups to watch, previews, picks, players to watch and what team could be a sleeper to come out of each region.  I’ll be releasing my entire bracket on Thursday morning so there won’t be a ton of revealing here. 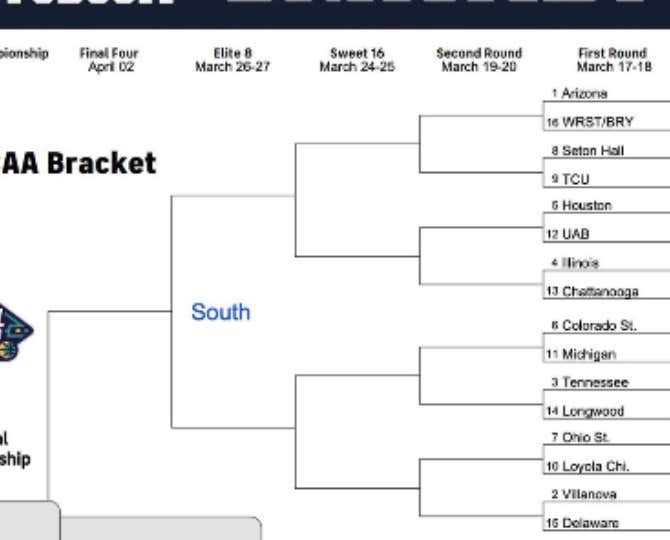 1. Will the streak end - Two massive streaks going on. The last western team to win a title was Arizona in 1997. The last Big 10 team to win the title was Michigan State in 2000. That's a long, long ass time. Well here you have the best shots. Arizona and Illinois obviously. You can even throw in Ohio State and Colorado State because why the fuck not. The fact is Arizona and Illinois are two popular choices to come out of this bracket, so there you go.

2. Tennessee let down spot - Tennessee is one of the two hottest teams in the country with Iowa. Now what happens? They have what appears to be a relatively easy draw for them with Longwood and then either Colorado State/Michigan. So where's the let down happen? Rick Barnes is 1-11-1 in the last 13 ATS in the Tournament.

3. Villanova flying under the radar - Weird to say because I thought Nova was one of the more overhyped teams coming into the year. I thought they could make a Final Four but not win a title mostly because of limited options. Eric Dixon became better than I thought. Slater/Moore took some jumps.

4. Sister Jean ain't doing this shit again - It's the time when everyone pretends to love Sister Jean. Well guess what? I don't, Doug! Everyone is also on Loyola because of what happened last year. They see the seed, oh they are scary, yada, yada, yada. Ohio State is limping in but that's also because Zed Key and Kyle Young were out during osmeo f hte losses. If they are back they should win relatively easy.

5. Jelly time - You know all about Jelly.

There are a couple ways to look at this, but I’m looking at this strictly as an intrigue factor. These are players that could be lottery picks in the NBA Draft, could put a team on their back or are just flat out good players. I'll try to avoid the obvious like Chet Holmgren or Paolo Banchero.

1. Kerr Kriisa (Arizona) - He's a name you likely know, but here's the thing. His ankle is all sorts of fucked up. He didn't play in the last two games. Arizona needs him to win six. Plain and simple.

2. Silvio de Sousa (UTC) - You remember Silvio de Sousa? The big dude from Kansas who picked up a stool mid fight. Why does he matter? Simple. They have Illinois in round 1 and he's a good size dude that can try to defend Kofi. I stress try.

3. Justin Moore (Villanova) - I know Gillespie gets all the awards and everything but I truly think Moore is the most talented player they have. Trust me, it makes sense. In order for Nova to get out of this region, they'll need Moore/Slater/Gillespie to be a fairly big three.

4. Mike Miles (TCU) - I love everything about Mike Miles' game. He really came on with Team USA this summer and is now leading TCU with 15 per game. It's not a ton, but it's enough based on how TCU plays. Miles is also important if they beat Seton Hall and catch Arizona with a hobbled Kriisa.

5. Isaiah Stevens (Colorado State) - David Roddy is the All-American but Isaiah Stevens is one of the biggest threats for them offensively. He shoots 37% from three. He's their second leading scorer. Colorado State can go on a run if they get by Michigan in the first round.

Matchup you want to see: No. 1 Arizona vs No. 2 Villanova - chalk, I won't apologize