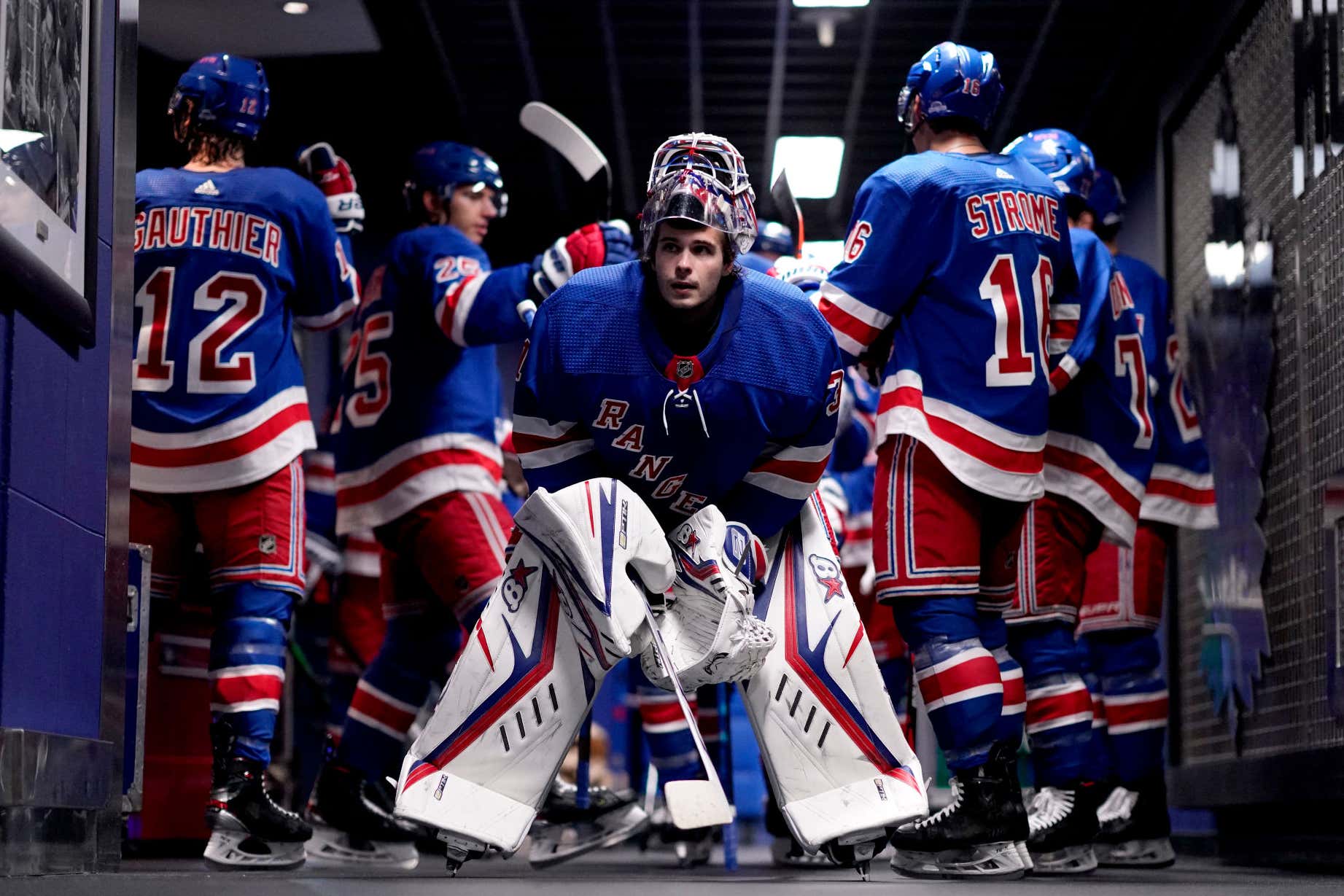 After a couple disastrous tilts in Minnesota and St. Louis, it seemed like the sky was falling on the heads of many New York Rangers fans. It sure didn't help ceding an early 2-0 lead in Dallas for the finale of their four-game road swing Saturday night…but somehow, some way, the Blueshirts bounced back with a decisive 7-4 victory. With about 75% of the season in the books, they still haven't dropped more than two straight in regulation & have only lost three straight once (two in OT) way back at the start of November. While this squad is young & has holes/flaws most other top teams don't, they've managed to go point-for-point with them & sit just 2 behind the Penguins (with a game in hand) for second in the Metro and fourth in the conference. They continue to have an answer any time opportunity begins to present itself for naysayers to write off the Blueshirts.

The playoffs are a different beast. Although NY is 2-0 vs TB & 2-1 vs FLA it's silly to think this team as currently constructed can bang with them or Carolina in a 7-game series regardless of whatever wizardry Shesterkin can pull off. The Pens, who look to be the first-round matchup unless something drastic happens down the stretch, may seem like a coin-flip on paper but they've got guys who have been there plenty of times. It's gonna be a hell of a feat for whoever comes out of the East. While the Rangers certainly have a puncher's chance, next week's trade deadline will be of the utmost importance in improving their odds.

Shesterkin, Fox, Zibanejad, Kreider & Panarin have all helped this squad overcome some glaring deficiencies. Secondary scoring has been lacking - namely due to the struggles/injuries of youngsters Kakko, Lafreniere & Chytil on top of having to regularly deploy blatant bottom-sixers like Goodrow or Hunt in their top-six. Defensively, although he's been better since his return, Nemeth has been an albatross rounding out the D corps. As a team, their 5x5 play leaves a lot to be desired. Six of the Eastern playoff teams rank in the NHL's top eight in 5x5 expected goals-for percentage. This means they all regularly have the advantage in terms of quantity & quality of chances. The Capitals rank 16th (according to Natural Stat Trick). The Rangers? 27th.

It's no secret Vezina Hart-caliber goaltending & the league's 2nd-best powerplay have nullified their 5x5 disadvantage, but when you're having to go through at least two if not three of the league's elite at 5x5 in the postseason where refs tend to swallow their whistles then it's obvious where Chris Drury needs to make his improvements at next week's deadline. One of the showcase names would be awesome - but Giroux & Hertl will control where they land thanks to their trade clauses and there hasn't been a shred of smoke to make you believe they'll choose NY. Pavelski just re-upped in Dallas and JT Miller has all but solidified his stay in Vancouver with a league-leading 26 points in 14 games since Feb. 8th.

So where do they look? Well if the Blueshirts are going to move a significant prospect it won't be for a rental. The only exception in my mind would be for Hampus Lindholm. Assuming he doesn't re-sign with Anaheim he's the unquestioned top rental defender available. Although he's not an overly physical offensive threat, he's a reliable big-bodied minute-muncher who can skate and move the puck. Keeping him any longer than a lone playoff run isn't realistic considering the payday he's in store for this summer, but if Drury wants him he'll have to win a bidding war. This is where he might have to attach Jones or Lundkvist to a first. Bringing in Lindholm takes care of the Nemeth problem by allowing them to drop either Miller or Lindgren next to Schneider. If Lindholm isn't the target then it'll be someone like de Haan or Giordano from the bargain bin to serve as defensive depth.

Up front is where Drury will have to make his biggest impact. Even if Kakko gets healthy for the postseason is he really the answer on your second line to make a run? I don't think so. The two best names to plug that hole won't be the prettiest and the cost to get them may seem like an overpay because both would be under team control for at least another year - and those names are Artturi Lehkonen and Brandon Hagel. Hagel is one of those diminutive yet tireless "Energizer bunny" types, as well as a steal in terms of his contract with two more years at $1.5M to go & he'd seemingly fit perfectly next to Strome & Panarin. His 5x5 points rate would rank third on the Rangers behind his two prospective linemates so he'd bring offensive ability to the "dirty work" role Gallant has tried to fill on their right side. Next year and beyond he'd slot down as the perfect third-liner, so the trade not only addresses now but solidifies a piece of future depth that needs drastic improvement.

Lehkonen is the prototype of a hockey player who simply doesn't do anything wrong. Ever. He won't bring much in terms of scoring punch but he's an analytics dynamo. Despite being on the worst team, only 9 players in the league with over 600 5x5 minutes have a greater positive impact than Arturri Lehkonen. To simplify - the puck is heavily tilted into the offensive zone whenever he's on the ice and that's precisely what this Rangers squad lacks. If he can do it in Montreal there's no reason to believe he can't be equally as impactful in New York. While he'd be another perfect third-liner in the future, the pending RFA could do wonders next to Panarin & Strome right now simply by allowing them more offensive opportunity via puck possession.

Either player would be a subtle improvement this season while being even moreso next season when they'd be elite third-line options, and that's where I think Drury should put his significant trade chips towards as opposed to the biggest rental available. Realistically speaking, they're more than "the biggest deadline name" away from being legitimate Cup contenders. You've got to remember the window is just now opening for this team. It's a process. Just because it seems to be expedited doesn't mean they've gotta go all-in at the first sign of success. If the Rangers can build now AND forward simultaneously then that's the play. They can always go after secondary rentals (i.e. Kessel) with lesser picks as well, but don't be surprised if you see them trade significant assets for a name that might have you scratching your head saying "who the fuck is that guy??".

And that's perfectly fine. Whatever happens this season is gravy - it's next year and beyond where winning expectations get real.