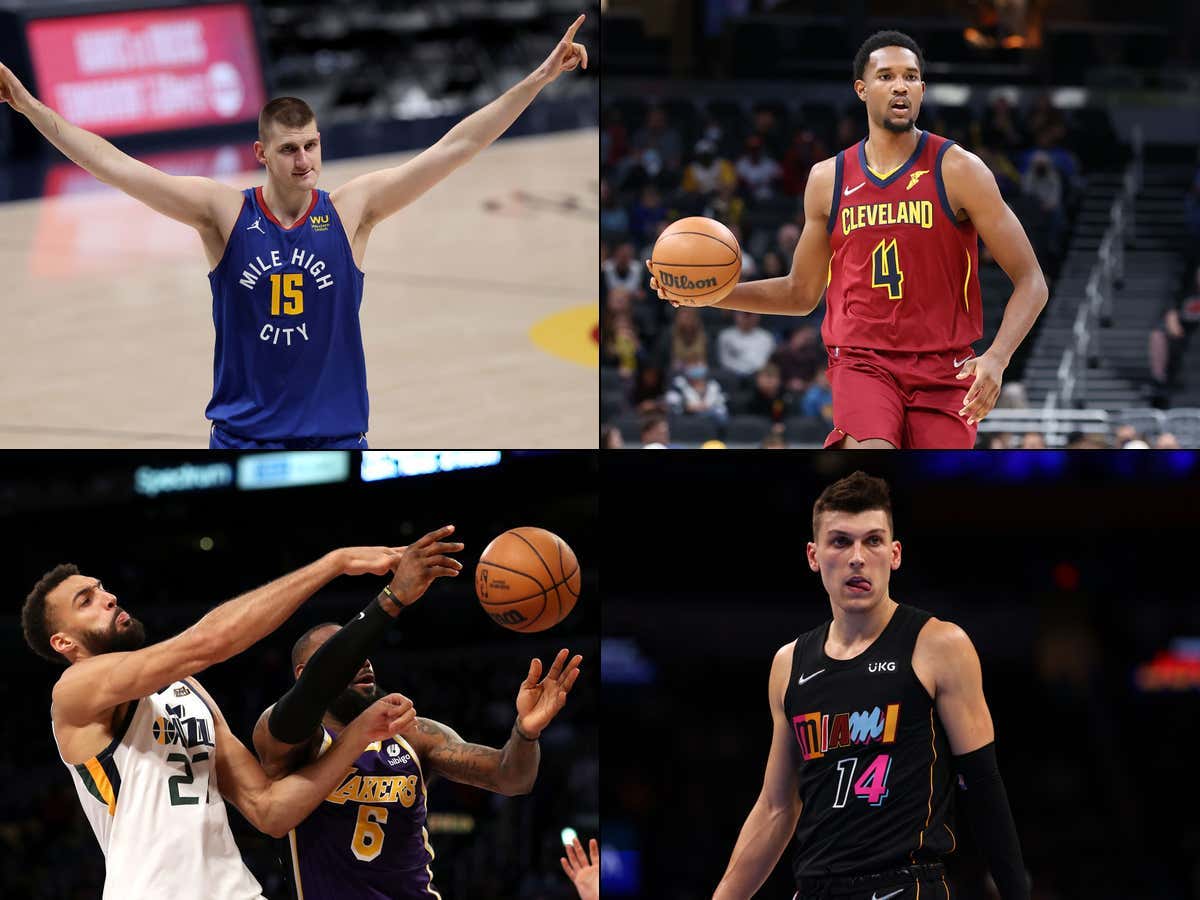 I don't think it's a stretch to suggest this has been one of the more entertaining NBA regular seasons in recent memory. The parity, the surprise teams that have had great years and appear to be way ahead of schedule, the insane individual performances we get on basically a nightly basis, it's all been awesome. This is even more true once the covid absences started to let up and we got to see teams with their intended lineups. The product has been awesome pretty much from the jump.

That all now gives us a pretty awesome problem. How the hell do you pick the NBA Awards? Pick one, any one, and you'll see it's a near impossible decision. The snubs are going to be outrageous and there will be some upset fanbases, but that just goes to show you how unreal the talent is right now. Doesn't matter if it's MVP, ROY, DPOY, 6th Man etc. We're at the point of the season where every single game from the contenders of those awards could swing votes. That's how close things are right now. So I thought given that we have around 17ish games left in the year, let's run through each category and see how everyone stands.

We may as well start off with the biggest one, and the award that most people probably care about above any other. For this exercise, let's first check in on the most recent MVP Ladder released by the league. This is as of March 4th

Since then we've seen some pretty insane individual performances from guys like Jokic/Giannis/Embiid which only further complicates things. I don't mean to disrespect DeRozan or Bulls fans, but it's time for everyone to accept that this is a 3 man race and might even really be a 2 man race if we're being honest. It's also wide the fuck open. Every game these top 3 play could swing things. When talking about these three, you obviously have to look at their entire body of work

Here's the thing to remember with MVP. Narrative is pretty damn important. It might not matter what you do statistically if you don't also have the narrative support. How can anyone forget this

You're kidding yourself if you don't think other voters go this route. So while you look at all those comparisons and see Jokic clearly dominating, you cannot forget the narrative aspect. He's trailing Embiid in that department and that's just a fact. Fair or unfair, that's the truth. The thing is, Embiid is absolutely deserving as well. There might not be a more dominant player in the league right now as long as he's not being guarded by Al Horford. What I think helps Jokic is the record his team has when he plays is in the ballpark of the other two while having nowhere CLOSE to the same level of supporting cast. I mean, Tyrese Maxey would be the best player Jokic would have played with until Murray/MPJ get back. The same is true for someone like Jrue Holiday. Meanwhile, Jokic is putting up that type of production and that record without him. You could make the case that should seal the deal.

Then there's Giannis. He's probably suffering from some voter fatigue this year. Happens to everyone from Jordan to LeBron. The Bucks and Sixers are neck and neck so it maybe shouldn't be that way, but I have a hard time seeing Giannis getting his 3rd MVP over Jokic or Embiid unless the Bucks somehow go on an insane run and finish atop the East or something.

That's why games like March 14th when we see Jokic vs Embiid is going to be so awesome to watch. You could have Jokic with a slight lead right now, and then in a week if Embiid dominates that matchup things are going to flip. Same if you have Embiid in the lead and Jokic goes into Philly with an undermanned Denver team and tosses up 41/14/15 or some shit in a win.

Of all the races we have right now, this is truly one that is too close to call right now. We need to see how the last stretch of the season goes for those top 3.

Let's be clear here. If the Warriors recent free fall is any indication, this should be Draymond Green. They had the league's best defense when he wasn't hurt and were wiping the floor with everyone in their path. Then he got hurt, missed the last two months and the Warriors defense is nowhere close to that same level. As a result, their dropping games left and right because they can't stop anybody.

Unfortunately for Draymond, I think this is going to be a games played issue. Even if everyone accepts that he's the most logical DPOY choice, being on the court matters for these awards. So then you move to a familiar name in Rudy Gobert. He's by far the best rim protector in the NBA, but the advanced metrics aren't as kind to him this season. The Jazz do have their issues defensively, but that's more on the perimeter than it is on the paint. There's also a chance for some voter fatigue here as well, plus the reality that everyone seems to just not like Rudy Gobert. It wouldn't shock me one bit though if he was given the nod now that Draymond is out.

So who are some other names that could win this thing?

Just kidding. I don't think Rob will get legit consideration for DPOY, I just love that tweet so I had to include it. He should, but I'm a realist, I know he won't. Just look around to the names you hear, Rob is nowhere to be found despite having the body of work to be included. I think it's much more likely that as a consolation prize for not winning MVP, we could see Giannis take this award home again. Jaren Jackson Jr should get some love too, he's had a really strong defensive season and the Grizzlies are nails.

My question is could this be the year we see someone other than a big get into this conversation. What about someone like Mikal Bridges? Shit, even someone like Smart? I think someone like Bam might get screwed due to games played just like Draymond, but he's an unreal defender as well and if MIA finishes in the top spot in the East, I could see it.

Ok, I know the whole premise of this blog is that these awards are a bloodbath, but I cannot sit here and pretend like this category is up for grabs. It's Tyler Herro. He leads all bench players in scoring at over 20 a game and he has 46/41% splits with 2.7 3PM a night. Herro has been awesome and a huge part of why the Heat were able to survive as they dealt with all their injuries. Hand up, I was wrong about Herro. I didn't think we'd ever see Bubble Herro again after what we witnessed last year, and that could not have been more wrong. He's legit and there isn't even really anyone I would consider a close challenger. Kelly Oubre Jr? Bogdan Bogdanovic? Jordan Clarkson? All having good years, but nothing quite like Herro. He's been consistent from the start of the year until now and is a legit weapon.

When it comes to this award, I really don't pay too much attention to team record. We can see someone make a jump and still be on a team that stinks. Case and point, Anfernee Simons. I know pretty much nobody outside POR fans are watching their games, but I recommend you tune in to see Simons play. He's going to be really really good for a long time. He's taken his production from 7.8 points on 41/42% shooting to 17.3 points on 44/40% to go along with a massive jump in FGA. Part of that is Dame getting hurt, but whatever. Simons has stepped up and turned into a legit starting two guard.

But he's not alone in players who have taken a leap. I could see this going to Morant for sure given his insane year. Shit, I bet Herro even gets some votes here as well. What about Grant Williams who is very close to having the only 50/40/90 season in the NBA? What about Maxey who has EXPLODED onto the scene with his new expanded role? Then there's someone like Dejounte Murray who broke out and had himself an All Star season. That seems like some legit improvement from one year to the next. Same is true for Darius Garland and what he's done this year.

Outside of MVP, this might be the hardest one to pick. So many awesome young players have taken massive leaps, I dunno how you say definitively that one was better than the other.

If you asked me to predict this award a month ago, I'd say Evan Mobley without hesitation. Instant impact on a playoff team as a rookie is pretty damn impressive and not something you see a whole lot. Usually, the high lottery picks go to rebuilding teams, but the Cavs are actually good this year and the play of Mobley is certainly a factor in that.

That's Cade Cunningham music folks. Some good averages at 16.5/5.8/5.2/1.2, Cade has been pretty damn impressive. This is especially true as of late where the Pistons are all of the sudden playing everyone tough and actually winning games. Should he be penalized because he got drafted to a tanking team and Mobley went to a more established one? That'll probably work against him, unfortunately. But when you watch Pistons games you can see it, Cade is the real deal. Their rebuild is going to be a lot quicker than most people think. It wouldn't shock me if they are the Cavs of next season and flirt with the play in. I know people roll their eyes on a team that is actively trying to lose games, but there is real talent on that roster. Cade, Bey, Stewart, Grant etc is not the worst young core you'll see in the league. They play tough as shit and if they can just add some additional shooting, look out.

No idea where you go with this. Do you correctly make up for last year and reward Monty Williams for once again having the best team in the NBA? Is that more impressive than say, what Taylor Jenkins is currently doing with the Grizzlies? Who on the planet had the competing for a top 2 seed in the West. What about J.B. Bickerstaff and the Cavs who are clearly way ahead of schedule this year. What if the Celts continue to go on a run and somehow finish top 3? Shouldn't Ime Udoka get some consideration given the fact that he's a first time head coach?

If I had to guess, it'll go to Monty Williams, which isn't even a bad choice! It's time to reward that man for what he has built in PHX. That's a consistent level of dominance that deserves some COY love. They are 8 games clear of the Grizzlies and are surviving without CP3 AND Devin Booker.

So, as it stands now, if I had to put some names to the awards, I'd probably go like this

The beauty is you can almost bank on the majority of these award races changing over the last month of the season. That's what makes the end of the regular season so much fun. You can now feel free to tell me how muchof an idiot I am, but you then also must give me your lists. Let's see em.