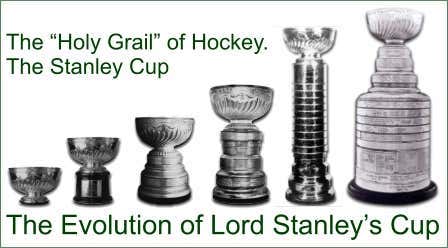 Frederick Arthur Stanley was born on January 15, 1841, in London, England. An avid sportsman, Stanley served in the British Army, rising to the rank of captain before beginning a career in politics. A member of the Conservative Party, Frederick Stanley held several political jobs during a two-decade career in parliament, including secretary of war. In 1886, Stanley was appointed as Lord Stanley of Preston. On May 1, 1888, Lord Stanley was named as the Governor-General of Canada by Queen Victoria. The Governor-General of Canada carried out the governing of Canada on behalf of the British Monarchy.

While serving as Governor-General, Lord Stanley toured all of Canada, making him popular in the Western Provinces. Among the things that Stanley enjoyed most was the sport of Ice Hockey, which he first became exposed to at Winter Carnival in Montreal in 1889. Stanley’s two sons, Arthur and Algernon, became active in hockey. With no visible trophy for the top team in Canada, Stanley’s sons suggested to their father donate a trophy that would be fought for through a series of challenges. After Ottawa won the championship in 1892, Stanley announced he would create a trophy for the following year.

The trophy was a decorative punch bowl was made in Sheffield, England, and sold by London silversmith G.R. Collis and Company. The price was ten guineas equal at the time to $48.67 U.S. Dollars. Inscribed on the Cup was the Dominion Hockey Challenge Cup presented by Lord Stanley of Preston. Posting a record of 7-1-0, the Montreal Hockey Club had the best record in the Amateur Hockey Association of Canada, thus becoming the first winner of Lord Stanley’s Cup. The Montreal Athletic Amateur Association took possession of the trophy in May, giving the players gold rings to commemorate their championship.

An agreement was reached between the National Hockey Association and Pacific Coast Hockey Association for a set playoff system in 1915. In possession of the Cup, the winning teams agreed to several rules set down by Lord Stanley. Each team winning the Cup had the right to engrave their name on the Cup at their own expense, and no matter how often a team won the Cup, it would remain up for a regular challenge. The winners had to return the Cup to the trustees upon a challenge. The challenge era would last for two decades before professionalism took over.

The PCHA and later the WHL faced the NHA and later the NHL yearly for the Stanley Cup, with the National Hockey League taking sole possession of the Cup after the Western Hockey League folded in 1926. The original bowl was retired and placed in the Hockey Hall of Fame in 1963 as the tradition of engraving the winners' names has carried on with the several incarnations of the Cup.