Loyola Chicago punched its ticket to the NCAA Tournament with a 64–58 victory over Drake in the Missouri Valley championship game on Sunday.

The Ramblers, who were clinging onto a bubble spot in Sports Illustrated’s latest bracketology, outlasted a physical Bulldogs team to come out on top and claim the conference’s automatic qualifying bid to the Big Dance. The two schools battled throughout the afternoon and neither side was able to amass more than a 10-point lead at any point during the game.

With the win, Loyola will head to its second straight NCAA Tournament in Drew Valentine’s first season as the program’s head coach. Last season, the No. 8 Ramblers, under the guidance of now-Oklahoma coach Porter Moser, shocked No. 1 Illinois in the Round of 32 before falling to No. 12 Oregon State in the Sweet Sixteen.

Everybody’s favorite Cinderella team is headed back to the dance. Although at this point, 3 tournament appearances in the last 4 years, are they even a Cinderella anymore?

Porter Moser established a winning culture, built a hell of a program, installed Drew Valentine as his successor in waiting (a surprise to many of us) and then turned his back on us to take a bag and coach in The Hills Have Eyes country.

No matter. Loyola picked right up where they left off.

Loyola came into this "Arch Madness" conference tournament 25–7, and 13–5 in the MVC. They rolled past Bradley and then Northern Iowa, led by Missouri Valley Defensive Player of the Year Lucas Williamson, who dropped in 18 points and grabbed 10 rebounds in this conference championship win.

Senior forward Aher Uguak chipped in 16 points and another 10 boards for the Ramblers.

LUC fell behind 18-8 in the first 12 minutes as Drake had five blocked shots—three by DeVries--and four steals.

But the Ramblers turned the tables, using five Bulldog turnovers and an 0-7 DU shooting slump to score 19 unanswered points to take a 27-18 lead.

The punctuation mark of that 19-0 Loyola run came when Aher Uguak made his first free throw, missed his second and got the rebound himself, pitching it to Braden Norris, who buried a three-pointer to give the Ramblers a 27-18 lead. But the Bulldogs fought back in the final two minutes with two Penn buckets and a Tremell Murphy three-pointer to cut the LUC halftime lead to 27-25.

The Ramblers stretched that lead to as many as six over the next eight minutes and led 46-42 when Uguak, who had 16 points and 10 rebounds, hit a bucket-and-one and Ben Schwieger split two free throws to make it 50-42 LUC with 8:26 left. Drake never got closer than six after that until the final four minutes.

Loyola put it away with nine free throws in the last 114 seconds: four by Uguak, two by Schwieger, two by Norris and one by Marquise Kennedy.

The title of this blog is certainly a dig at the safety school's basketball programs (Depaul and Illinois). (And yes, I'm fully aware Loyola is a Northwestern safety school). But I have no beef with Depaul. I actually want them to do well and develop into the powerhouse they should be. It would only benefit the rivalry and keep more Chicago talent in state.

As for Illinois, I WANT THEM in Loyola's bracket again so the Ramblers can beat the brakes off them. Again.

Mostly due to outlandish claims and tweets like this

Never forget that Loyola University of Chicago is the ONLY school in the state of Illinois to ever win a national championship.

Also never forget that Sister Jean prays for us.

p.s. - you gotta love how fucking tone-deaf this University president Jo Ann Rooney is. Never letting an opportunity to ask for money slip through the cracks. 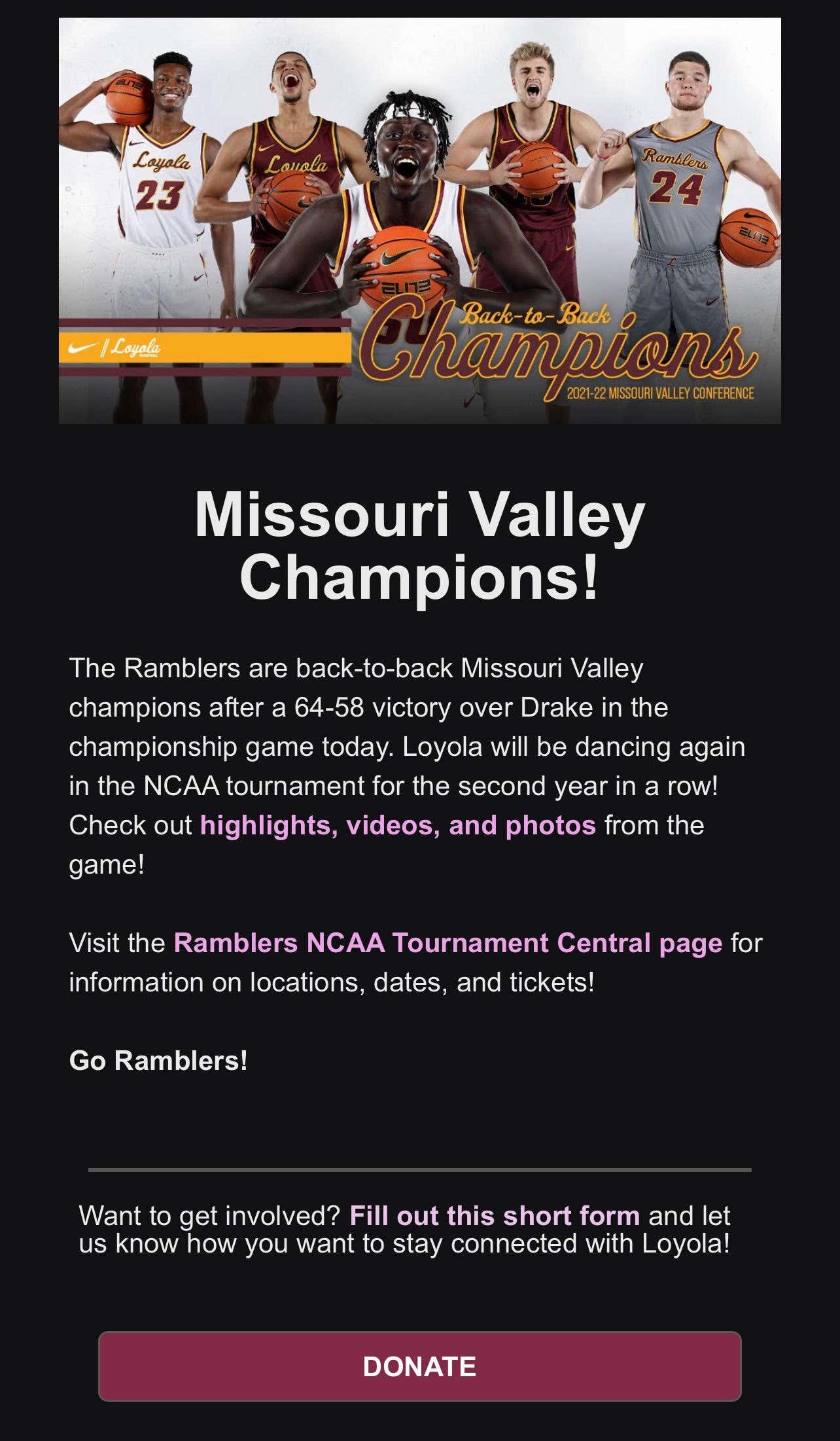