First of all, whoever is controlling the aux cord in Amalie Arena has to have a better feel for the game than this. You can't be playing Outkast while the head coach is eviscerating the officials like that. Down 3-1 with a minute left in the 2nd period? Save "Hey Ya" for when the Bolts make it a 3-2 game and the vibes are turning the corner. Neither the right place nor the right time for that one. It takes a total team effort out there to win in the National Hockey League. Arena DJ included. Everybody needs to be better here.

Now back to the matter at hand here...I'm not much of a lip reader but basically what I got out of all that was this:

Seems to me as if Jon Cooper thinks that Wes McCauley is an f-ing joke and is f-ing embarrassing. I mean there's just no need for that kind of language, coach. There are kids watching at home. You can't go around potty mouthing the officials like tha.. 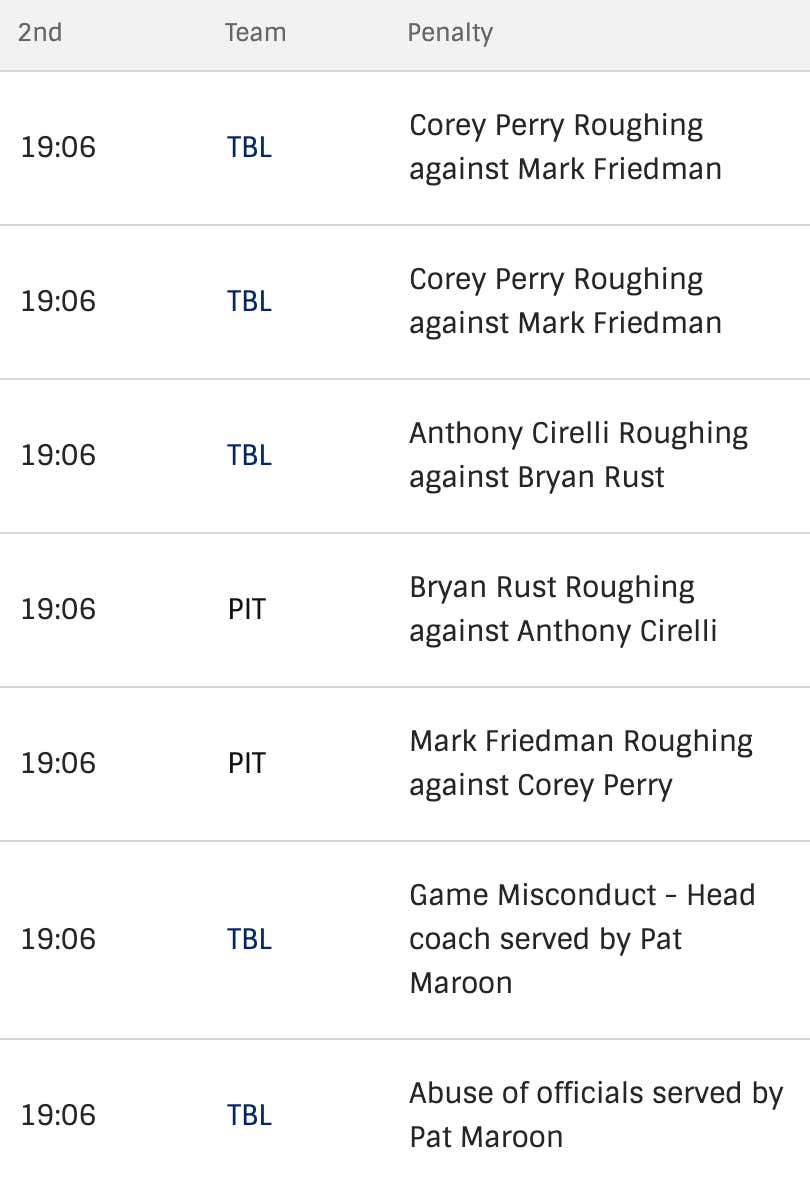 Okay yeah on second thought, that's pretty fucking embarrassing. Not quite sure how the Lightning were ending up on the PK after that little donnybrook in front of the net. Granted, they should have been on the penalty kill if the refs actually did their job and called the initial slash on Corey Perry. But somehow they let that one go, Mark Friedman's wires cross and he just decides to jump Perry and stirs up complete bedlam. Chokeslams him to the ice and somehow Corey Perry the one who got the double minor for roughing?

The man has a point.

I'm a Wes McCauley stan. I think he's great. Sure, he might make the game a little more about himself than you'd like to see out of a ref, but at least he's entertaining about it. But that doesn't change the fact that he's just as guilty as every other zebra in the league for doing everything they possibly can to stroke off the Pittsburgh Penguins. I'd imagine it goes all the way to the top with Gary Bettman, but Wes McCauley is complicit. It's a fucking joke. It's fucking embarrassing. And Jon Cooper came here to do two things--smack around a whole pack of bubble gum, and call out the league's officials for clearly having an agenda to never penalize the Penguins. And guess what--Jonny Coops is all out of bubble gum.

P.S. -- Speaking about wires crossing in the NHL last night, nobody makes the Nate Dogg bleed his own blood.

Love how the linesman thought he was going to be able to get in there and stop the fight before Nasty Nate unleashed as much damage as he wanted. Love a nice superstar psycho.