*dusts off the blogging fingers*

Ever since we started Unnecessary Roughness (RIP, Comeback SZN. Still love for you always, Johnny), me and Brandon have debated many-a-things. Sometimes he's right, sometimes I'm right, but they are always spirited debates nonetheless.

We have fun here, especially in the off-season where we can talk transfer portals, but more often than not, the episodes go off the rails. We have fun, especially when it involves reading my DMs on air.

That leads me to today's episode. Brandon and Jack decided to do "Bracket March", and we started with CFB media personalities. A VERY fun exercise that I knew would cause controversy. Sidenote: they put Laura Rutledge, who ICYMI is my friend in there as a #12 (?) seed, which I had stricken from the record. Conflict of interest. Did I mention we are friends? We are friends.

To be honest, most of the bracket was semi-agreeable UNTIL:

Brandon said Finebaum. To which I must ask a simple question- ARE YOU FUCKING KIDDING ME?!

Listen, I went to Texas A&M (I know, breaking news!). I know as much as anyone that the SEC is king. Everyone with a pulse knows that. But if we are debating who is the bigger name in college football, it's not even a debate. I'll put it as simply as I can: If you're an SEC fan, you MIGHT watch The Paul Finebaum Show. If you're a college football fan, you have watched College Game Day and have your entire life (before The Barstool College Football Show took over and embarrassed them into the 8th circle of hell, but I digress).

I'll never get tired of those pictures. Occasionally someone will click like on it on Twitter and it'll go to the top of my mentions and make my day.

But as I was saying, Lee Corso is a LEGEND. Sure, he says some weird shit in at his age now and Kirk (swoon) has to save him. He may drop an occasional awesome FUCK on live TV, causing every single ESPN executive to hypocritically clutch their pearls. But we're talking about quite literally DECADES of Lee being a staple in CFB. The mascots heads, the quirky comments, the man himself. And not to mention he coached for over a decade. It doesn't get more recognizable than ol' Lee Corso when it comes to the world of College Football.

Now, no disrespect to Paul. These are my former colleagues. I respect most of them. He has created a niche - which is just that, a niche - in the south that is unprecidentated. But that's my point. Only in the South. My friends who went to Wisconsin or Michigan aren't listening to some redneck named Thomas from Starkville argue with Paul about the 1997 Iron Bowl on a random Monday. But guess what? They'll know which mascot head Lee put on for the big game on any given Saturday.

Paul Finebaum vs LEE FUCKING CORSO?! How is this even a question?! I went to BAT against the rest of the podcast and it was a blast. As much as I hate the off-season… God, I love these episodes.

PS - If you want to play along, here is our bracket from yesterday. Listen to the episode to find out who won. 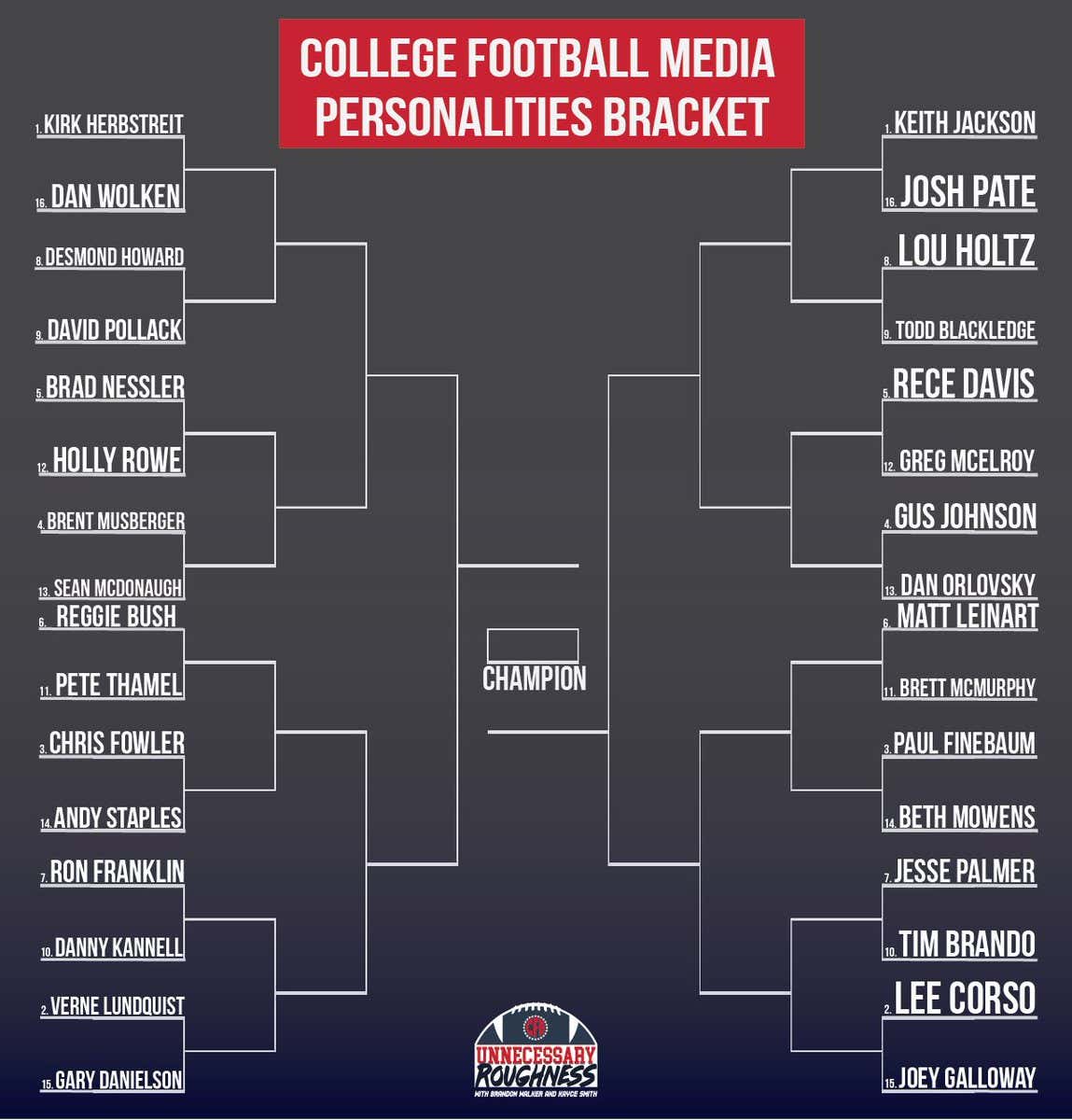