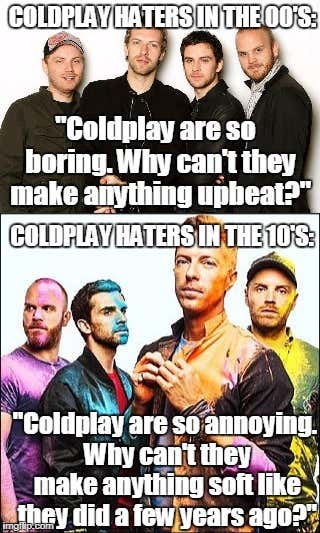 It's been a strange couple of years for Coldplay.

A little background on where I stand on them first. Back when they hit the scene, and were white-hot, I, being a macho cool guy, was in the camp with the other cool guys that they sucked, and were sad, sappy chick music.

I managed to look past the ridiculous amount of smashes they had- Clocks, Fix You, The Scientist, In My Place, Yellow, Viva La Vida, Trouble, Talk, A Sky Full of Stars, Politik, Don't Panic, God Put A Smile Upon Your Face, Shiver, Lost, just to name a few…

And I just settled in on the fact that they stunk. Even though you had to be a horse's ass to think that way.

Over time I matured and became wiser and grew to appreciate them. No time more so than when I went and saw them live at Soldier Field in 2017.

Without a doubt one of the best concerts I have ever been to. Not knowing what to expect going in, (definitely not expecting the energy and production I witnessed) only made it better.

My socks were blown the fuck off.

We had amazing seats thanks to a friend, but it was one of those shows that even if you were in the third deck the band made sure to include you in all the bells and whistles.

I told my friends leaving the show that it felt like we were just at a two-and-a-half-hour Super Bowl Halftime performance.

The number of confetti blasts, the amount of fireworks, and lasers was staggering. I couldn't get over the fact that this was just a regular stop on a hundred-something-legged tour. How the fuck do they do this every night?

I immediately had a newfound respect for the group and their work.

But how short-lived that was.

For starters, yah, they did the Chainsmokers thing.

If you didn't know the Chainsmokers were behind it, you'd admit you like it much more than you do.

I can't knock it. Song knocks. Still to this day.

Then Coldplay released their newest album, Music Of The Spheres, this past October and the best way I think I could sum it up is that for a band who had made a pretty amazing career for themselves by never "trying too hard", it's mind-blowing how hard they tried on this album.

On our podcast, "On The Guest List", Kenny Carkeet (of AWOL Nation) and I always joke around (but not really) about how music labels can and do find a way to fucking ruin anything.

I think it's exactly what happened in Coldplay's case finally.

Their lead single, "People Of The Pride"? Sounds IDENTICAL to Muse's "Uprising".

Now Chris Martin is on the record as saying he is a HUGE fan of Muse. And they even influenced his writing "Clocks". (But I don't hear it in Clocks).

I am also on the record as acknowledging that the best artists in the world are more than comfortable admitting that "to create is to borrow" and everybody pretty much uses other people's stuff to create their own. So I get it. I was just shocked that a band as creative and unapologetically original as Coldplay was blatantly sounding like somebody else pretty damn big. And somebody they publicly acknowledged being big fans of.

But that was nothing.

For their next single, they not only teamed up with a boy band K-pop group out of South Korea, they filmed an entire fucking documentary they, BTS, and every music marketer in the world shoved down our throats for two months, "My Universe".

When you talk about "selling out", this is the definition of it right here.

I used to think that throwing awkward rap verses on a song they have no place being on was the Maroon 5 blueprint on how to do things, but seems Coldplay caved in.

BTS is SO FUCKING MASSIVELY HUGE I don't think we can even comprehend it.

A song they're featured on which was released 6 months ago is still burning up the charts dancing around the top 20.

It didn't end there though.

Last week, for no reason whatsoever, they dropped a cover of the Kid Cudi classic, "Day n' Nite"

The single is a part of their "Spotify Singles series"

The band give Cudi’s megahit an atmospheric reworking, driven by piano and synth. “‘Day ‘n’ Nite’ I loved when it came out, and I still love love love it,” frontman Chris Martin said in a statement. “This is the first time I think that we’ve really taken proper time to record a cover, because in my head I could hear a version of it quite different from the original, that hopefully just reinforces what a brilliant song it is. One way or another I hope that anyone listening will just think, ‘Wow, Kid Cudi is amazing.'”

I honestly don't know what to think about it.

I've listened to it two dozen times and I'm still 50/50 on it. To me, "Day N Nite" will always be The Crookers remix. So hearing a downtempo, deep cut version of it just seems odd. Even though it does sound kinda dope.

Is it bad, or lame, that I'm upset that Coldplay is evolving for no real reason? I think it is, and I know I sound like one of those miserable haters (who are the absolute worst). But I don't know. Maybe I'm fucking crazy?

p.p.s. - another incredible edit (humble brag) is the Taylor Swift - Haunted x Coldplay - Scientist mash at the end of my T-Swift Fix mix.