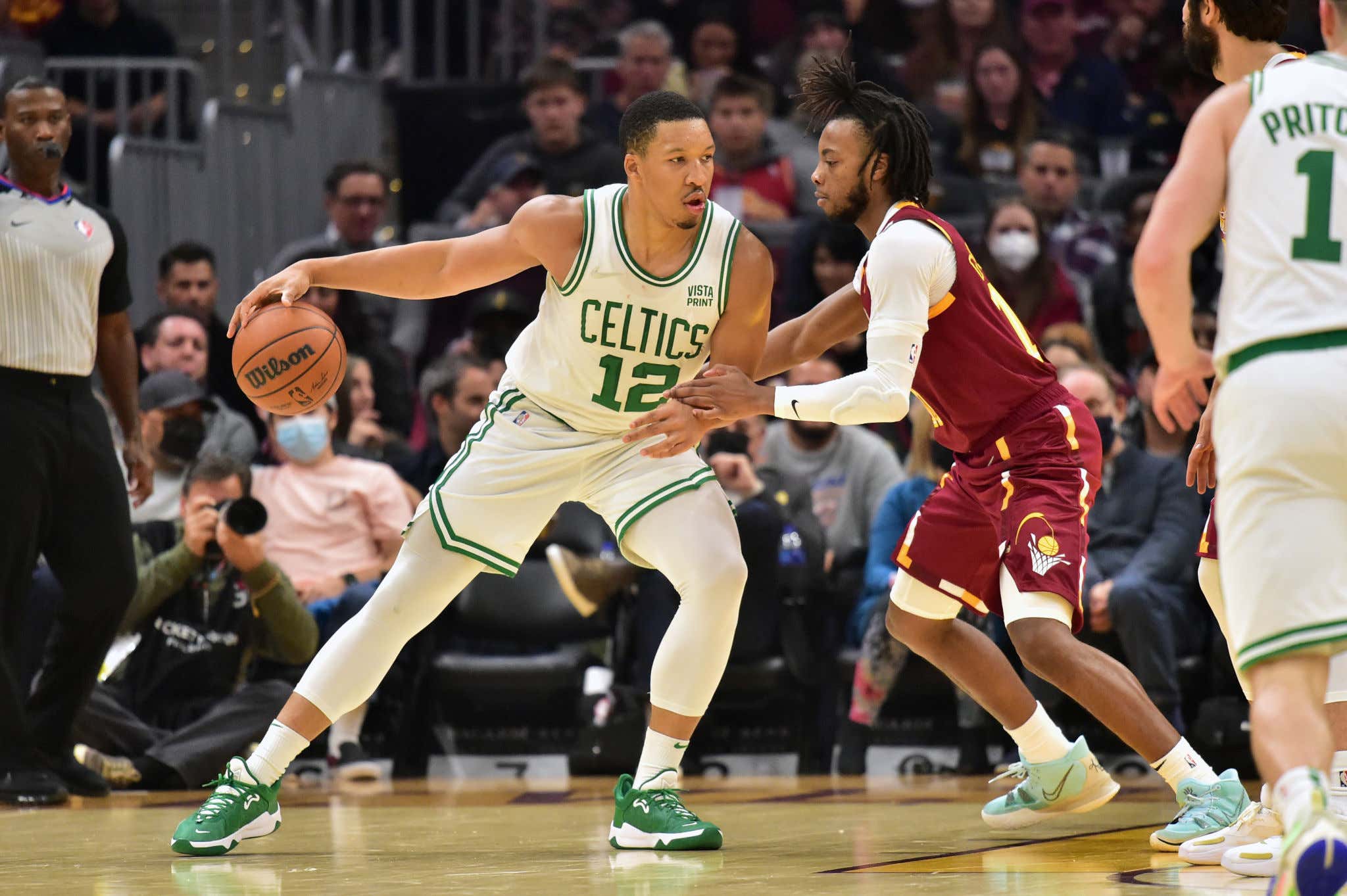 There was not a hotter team in the NBA heading into the All Star break than the Boston Celtics. Sorry if this statement of fact upsets you. Even with their extremely annoying (no, I am not over it, you should know this by now) loss at home to the goddamn Pistons. So with all this time on my hands until Thursday night, I've spent the last few days thinking about what I hope to see once the games start back up again. While I think it's a little unrealistic to think we'll see another 16-4 run or whatever, there are certain areas of that win streak that I definitely think are repeatable. As we know when it comes to this team, their biggest hurdle is consistently playing the right way and not falling into bad habits. They are two completely different teams when that happens, I think the sample size is large enough to say that.

So while I was able to narrow down my list to 5, I wouldn't say these are the only 5 things I hope to see. Instead think of them as 5 things that I believe can truly help this team stay on the right path over their final 22 games. They are things that should happen regardless of the opponent in my opinion. Make sense? OK good. If not, whatever, just keep reading anyway.

So much is made about Smart's ability to shoot the basketball, most of it being negative. You know what you don't hear too much about? How insane Marcus Smart has been once he steps into the paint. I'm talking numbers that you don't even think can be real given his offensive shooting struggles but are entirely true. Allow me to explain.

So far on the season, Marcus Smart has about 65 touches a game. Not all that crazy for a point guard. At the same time, we're only seeing him touch the paint on an average of 1.2 touches a night. In total, of his 3,185 touches on the season, just 58 of them have seen him hit the paint. That's only 1.8% of his touches. Given his size, I would like to see that number drastically improve. I consider this important because the Celts just lost one of their better players at forcing rim pressure in Dennis Schroder. Here's why you should feel confident in more Marcus paint touches working out.

For a team that's known to go on offensive droughts for about half a quarter at a time, making sure they stay committed to getting Smart into the paint is a great way to combat that. This is why when it comes to Smart's shooting, it's never been a volume issue for me. It's an approach issue. I don't care if he takes 14 FGA a night if 7-8 of them can come in the paint where I know he can be effective. He can use his size and strength to get wherever he wants on the court against an opposing guard. My hope is that over the final 22 games we see more of this.

I know, Jaylen's handles have traveled back to 2016. I get it. The guy can't dribble for whatever reason this season. But I've seen enough to still believe in his overall improvement as a ball handler. So when I say I want to see more Jaylen in P&R, what I really mean is at times when we see Rob on the floor. Right now we see Jaylen in this set as the primary ball handler at about a 16.3% frequency. Not bad. He shoots 43.8% which isn't terrible, but his TOV% of 18.5% is flat out brutal. So why do I want to see more of it?

Because he has a legit connection with Rob. I'm not above suggesting they at times share the same brain. I trust Jaylen to throw that lob to Rob 100 times out of 100. So, you can either have Rob be the screener in this situation or maybe use Horford. Then once Jaylen gets downhill, boom, easy lob to Rob or Jaylen can take the pullup in drop coverage. Did you know he's shooting 46.4% from midrange this year? Now you do.

My thought is I want to keep defenses guessing. If Jaylen can manage to not turn over the ball, what does the defense do? If they worry too much about the lob, he'll pull up. If they focus too much on Jaylen coming off that screen, he now has the ability to read the defense in real time and find Rob for the easy lob. You might be asking why I want to see this with Jaylen and not Tatum, and to me it's pretty simple. Tatum doesn't have the same pullup/midrange threat right now. He shoots just 37% from that zone. Sure it's a shot he can make, but I'm looking for as efficient a play as I can find to help this Celts offense that struggles more often than not.

#3 More Derrick White with the starters

This one should really be a no brainer. All you have to do is look at the brief sample we've had of this so far.

The combination of Smart/White/Brown/Tatum/Rob has played in 2 games since the deadline. In those two games they've shared the floor for 15 minutes with 12 of those coming in the fourth quarter. Here is how they did

Ladies and gentleman, may I present to you the new ideal closing lineup for your 2021-22 Boston Celtics. It has everything. Playmaking, defense, spacing, pace (100.85), shooting, you name it. But here's the thing. Before we can feel good about trusting this lineup in a playoff series where defenses will be better and everyone will actually be trying, we need to see as many reps as possible leading up to that. I love how the majority of the minutes this group has is in the 4th quarter, but I honestly don't care what part of the game we see it over these final 22. I just need them to get more reps together. Especially if this is who is going to be closing out games that matter.

Most of Grant's breakout year revolves around his vastly improved three point shooting. It's a true testament to his offseason work. He continued to shoot the ball great during the streak, so that wasn't all that surprising. You know what did shock me a little bit though? Grant is sneaky really effective in the post, despite being undersized. I think it's partly his gigantic ass, but also his overall strength and patience. Grant does not rush when he gets the ball on the block. He has a great feel of where the defender is, and once he gets him on his hip, it's game over. He's too strong. Add in his sudden ability to finish through contact, and man do I want to see more of this moving forward.

The numbers are actually pretty staggering when you look at them. Did you know Grant ranks in the 97th percentile in Post Up offense? He averages 1.43 points per post up possession which is flat out ridiculous. He shoots 60% on post ups and has a score frequency of 71.4%.

Now, let's tell the whole story here. On the entire season, Grant only has 14 total post ups in 55 games, so that impacts those numbers a little bit. But what it does tell us is there's something there that should be investigated. Especially when we see Grant run with the second unit. I know he's out there for spacing, but I say mix it up. It's pretty obvious Grant has the ability to find easy buckets once he takes his ass to the block. I also don't hate the idea of Grant turning and facing, and then using his dribble to attack. I trust that part of his game as well. Seeing him attack closeouts so well and still be able to finish/create leads me to believe he can do that shit out of the post.

You know what one of the benefits of having the league's best defense is? You can have times in a game where you sacrifice on that end if it brings you another skillset you desperately need. This team is currently looking for any sort of consistent outside shooting, and while in an ideal world Aaron Nesmith or Payton Pritchard step into that role I think we've seen that maybe it's time to see if Hauser can be that guy. Put him on the floor with all plus defenders and tell him to do what he does best

It's time to see if this Bizarro World Gordon Hayward can provide that consistent spacing the offense sometimes lacks. What I love is he's taken 19 total FGA this season and all 19 are 3PA (36.8%). He's out there to do one thing and one thing only and that's make threes. I'm not saying it's time to give this dude playoff minutes, but we've seen at least enough to be intrigued. If anyone has earned more of a look over these last 22, Hauser has to be near the top of the list. His skillset is so badly needed that I am willing to overlook however poor he might be on the defensive end. Again, you can surround him with multiple All NBA caliber defenders to limit that. I think if he shows his spacing to be for real, that outweighs all potential negatives.

I think we're all hoping that this team picks up right where they left off before the break. It'll be a good test to see just how for real this turnaround actually is. My thought is if we can see these 5 things consistently over the last few months of the season, it'll help prove that the last two months were not a fluke. Will it happen? No clue. But boy can I not wait to find out.