A few weeks ago I got to talking with my friend Thatcher about Glen Lerner. We went on and on and on about the guy each bouncing stuff the other didn't know off each other about him and I realized, "hey, this should be a blog.” The man is an enigma. His story is captivating. And the world needs to know it.

If you do the math these days – fewer people on the road and fewer accidents over the last year means less work for personal injury attorneys.  “Who fucking cares?” you ask.  Well I do, because when a Youtube pre-roll commercial pops up from a video dated from 2020 and Glen Lerner is looking like this, I get worried.

For years this man has been a staple on television ads, billboards, and CTA signage. No buttoned shirt, smiling without teeth, and a receding hairline? I know 2020 hit different for all of us but it looks like it sucker-punched Glen right in the gut.  I must admit, this is not the Glen Lerner I know but then that leads to the question, “Do I really know Glen Lerner at all?”

Before the internet, digital click funnels, and geotargeting advertising – local television crowned Kings. This story starts with the OG of Chicago legal marketing. 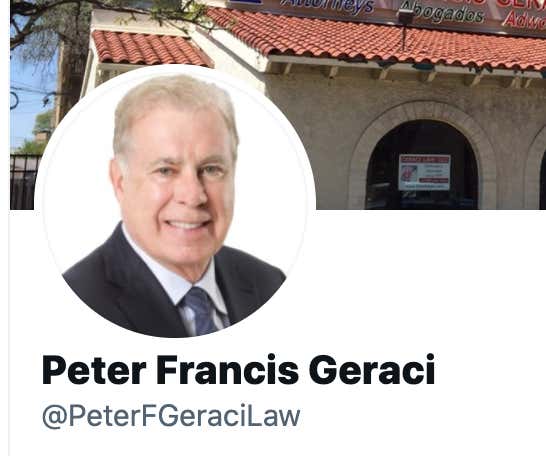 In the cosmopolitan capital of the Midwest- with his rather monotone delivery, no-nonsense approach, and overuse of bold font types in his commercials – Attorney Peter Francis Geraci absolutely dominated Chicago television airwaves for years, while leaving the audience wondering if he had been sedated with propofol before filming.

Did you television just randomly switch channels to an airing of Ferris Bueller's Day Off in the Ben Stein scene? Nope that's just another Peter Francis Geraci commercial.

He knew you that if you were calling him you probably were not going to reach all of your potential in life and that your credit was going to be fucked up for several years – but that was beside the point for Peter- he was there to help. However, from a branding perspective-  Geraci’s brand was “boring”

or as they say in Spanish – “Aburrido”

Until this happened sometime in the 2010’s:

With handsome looks, a buff body, and a million-dollar smile – Glen Lerner established himself as the most recognizable personal injury attorney between Frankfort and Waukegan.

Every TV commercial break during daytime television was absolutely dominated by this man.  In some ads, he would undo his collar just enough to let you know he probably had some crazy stories about how he spent his first settlement case check-  but that little anecdote would have to wait until next time – because if you were in a car accident - Glen and his team were going to make sure you got paid!

But how does a new lawyer bring his cavalcade of legal bravado, advertising money, and new jingle (“Call 222-Twenty Two Twenty Two”) into Chicago and go for straight for Geraci’s jugular in his own backyard with zero regard for what Peter Francis had created?  Lerner had no apparent connection to the city, no Chicago accent, and absolutely in no way could he properly pronounce, “Narragansett”  on the spot if asked. 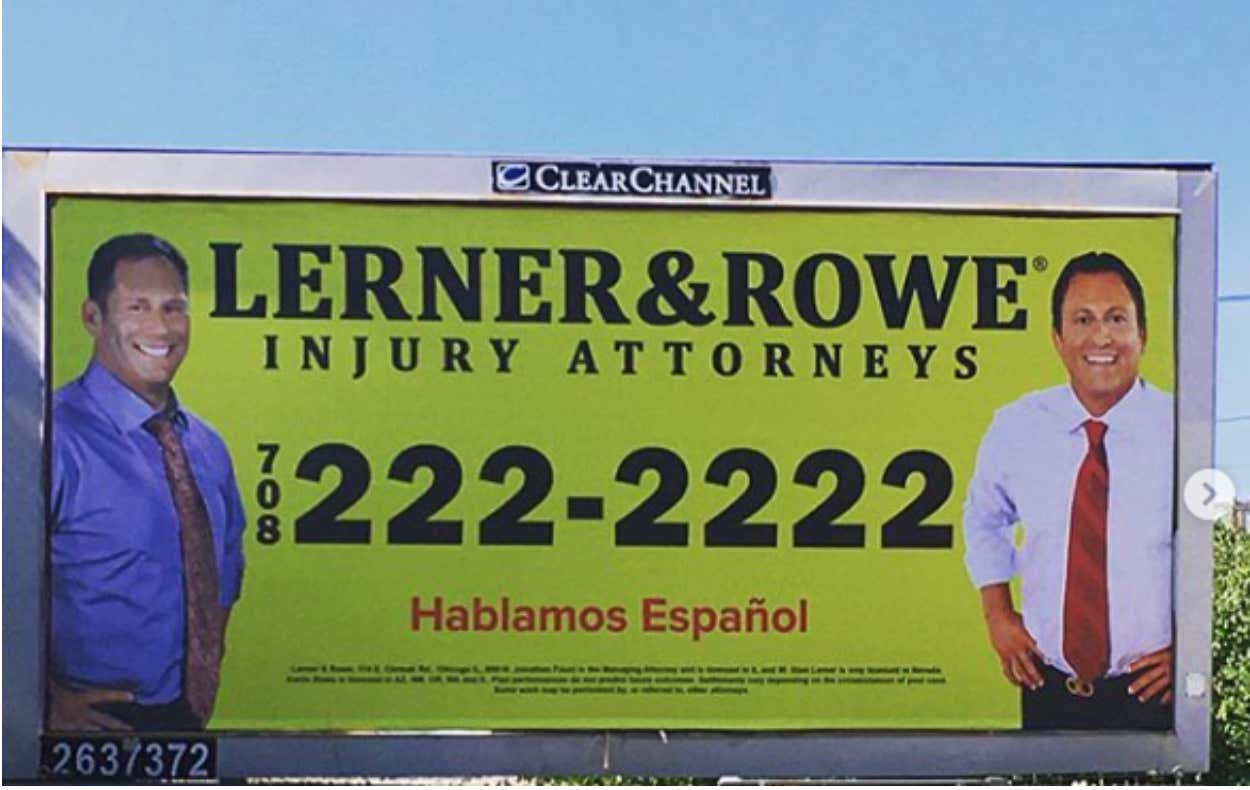 “You don’t forget me. A friend told me, ‘Glen, you’re one of those few people in life that it doesn’t matter who it is, if somebody has met you, they ain’t ever going to forget you.’ I asked him if that was good or bad. He said in most instances that’s good. I’m a charismatic guy.” -  Glen Lerner

The nobility of working at a law firm with three partner’s names separate by an ampersand coming out of law school tells everyone you are on the right track in life and validates you in certain social circles. I should know, I cut my teeth at mid level firm Arnstein & Lehr LLP back in college, and before moving across the street to the big show at Katten, Muchin, Rosenman LLP. This however was not the path that Glen chose. He cut his chops doing personal injury law in Las Vegas (and most likely owned every Ed Hardy shirt in the city at some point in his career) at a firm called “Budget Legal.” (Which  (if our research is correct) he eventually purchased from the owner)

Seriously, think about being a personal injury attorney in any large city and now think about doing it Vegas. Every slip, trip, and cocktail spill in a casino is payday for someone. Now, throw in one of the fastest-growing metros with subpar public transportation, degenerate “responsible” gamblers driving like fucking ass clowns, and long stretches of roads without stoplights (being from Chicago where you can’t go 35 feet without stopping- Vegas is definitely different) …and you have the perfect recipe for car accidents. And car accidents lead to personal injury settlements.

Nothing says, “I have seen humanity at its worst” like this interview from 2012- skip to the 4 minute mark:

According to our research, Lerner grew his brand in Nevada and Arizona before moving to other markets and Chicago was one of them. It sounds like Lerner just threw darts against a map and that’s where he was going next. Unfortunately for Peter Francis Geraci, Chicago just happened to be one of the markets Lerner landed in.

Tennessee, California, Washington, New York, Minnesota, Florida , and New Mexico– Glen Lerner conquered them all like Napoleon and built an empire!  (Note: It appears in AZ his firm was called always called “Lerner & Rowe”  - named after this business partner - and he has changed most of these practices to this name – but for the sake of this blog we are focusing on Glen Lerner. Fuck Rowe. No offense)

As you learn more about Glen’s story the more interesting it is.

His father, Maury “Pro” Lerner, was a professional baseball prospect turned mob hitman who served time in jail for a double murder.

Yes, you read that correctly.

Glen also grew up on welfare and he worked as a garbageman at one point.

Oh yeah, back to his father being a hitman for the mob.  While floundering in the baseball minor leagues and in his mid-20’s,  Maury Lerner’s path in life took a sharp left.  Make no mistake – Maury Lerner was in “the life.” From typical mob dealings, to being propositioned to assassinate Fidel Castro, and being rumored to have participated in multiple murders – Maury Lerner’s life is something out of a Scorsese movie.

It's actually shocking that Scorcese hasn't bought the rights to it and made it one yet considering he wasted 4 hours of everybody's life with that dogshit Irishman disaster.

He was eventually convicted of a 1968 double murder in a Providence convenience store. Supposedly Lerner took care of bookie in one of those “nobody saw anything” cases until an informant flipped and Lerner was later implicated.  A young Glen was there the day the FBI showed up and arrested his father.   The story of his father was featured in this 2016 NY Times article:

(Sidebar- I can't recommend reading this article this weekend enough. It's wild. If I knew somebody in the movie business we could write a screenplay, shop it to Glen, then to a studio and we'd all be gazillionaires)

“(Maury) Lerner was a sadistic killer and that he got his kicks from watching people bleed. He told of the time that Lerner had bragged to him how he killed Billy Aggie (Agisotelis) with a .45 while he and Aggie held a casual conversation in an automobile.”-  Richard Chicofsky (mob guy turned informant)

According to the NY Times article - Glen’s family moved closer to the prison so he could visit his father frequently and he says he still got to see his father 5 days a week.  In prison Maury Lerner turned his life around, coached the prison softball team, never traded information on his past life for an early release, saved the life of a corrections officer who was being attacked by an inmate, and maintained as strong a relationship as he could with his family. He was eventually released after serving 18 years when he was 53 and moved to Las Vegas. At this point, Glen was an adult and in law school. He even worked for Glen at one point at his firm. It's a true redemption story if you believe a serial killer is capable of being redeemed.

Maury Lerner passed away at 77.

Now back to Glen - He attended Duke and graduated undergrad with a degree in Religious Studies and then went to law school at Tulane. He also played on Duke’s 1986 National Championship soccer team (nbd). So you think a little Las Vegas debauchery was going to faze Glen when he was getting started in his mid-20’s? Probably fucking not. He credits his Christian faith and his family of 4 as his inspirations and during COVID has literally given books of clients to his employees to start their own firms. He donates to charities and also has his own website dedicated to his giving:

Going down a wormhole of Lerner Youtube videos is an experience – from the whole John Cena look to the present-day “Dad” look - Glen Lerner is an American success story of epic proportions.

Put this in perspective,  Lerner says at his height was spending $25MM a year in TV advertising - $25MM nationwide!! As an independent company that is a shit ton of money to spend on growing “the brand.” He is/was usually the largest media advertiser in any market he was in.  He single-handedly built one of the top 3 law firms with hundreds of employees across the country. He admits he learned from his mistakes throughout his career and understands the brand he created.

From this interview it sounds like 2020 has caused a decrease in cases but that there are still opportunities and leads coming through for Glen. He seems like he is doing just fine and that his brand continues to drive business through this depressed economy.

When it comes to brand branding Glen Lerner is a marketing genius and an American treasure that I would love the chance to talk shop with if he would oblige. If this gets to Glen please extend this invitation on my behalf.

(s/o Thatcher for the help)