It’s hard to imagine Fat Joe getting bitched at by his wife over forgetting milk when he stopped at the store or Adele uncomfortably holding in a fart but you know these things happen. Celebs are people too. Much richer, better looking, and a higher likelihood of having herpes but nonetheless they’re just like you and I.

That might be one of the coolest parts of an event like NBA All-Star weekend. There is such a high concentration of celebs that those human moments are seen by many. Hell, if you’re lucky enough you might even be crop-dusted by Adele.

If you weren’t an NBA legend, one of the biggest spots to be in this weekend was delivering the intro speeches for the 75th Anniversary celebration. And of those, the top billing went to Spike Lee. It’s weird to think Spike could be nervous for anything after a lifetime of courtside jawing with the greatest players in history, but he was.

That’s right, one of the most iconic film directors and ambassadors of the game left the celeb green room filled with people like 2 Chainz, Lil Wayne, and DJ Khaled so he could run through his lines a few times in peace while perched on some cheap promo shirts.

Actually, now that I think about it, if DJ Khaled was in there I’d probably leave too. No way you could memorize your stuff with that human bullhorn within earshot. I’m sure he’s a nice enough guy but every Khaled performance should be sponsored by Advil.

During one of the breaks in action the camera was showing celebs on the Humongotron. They showed Meek Mill, Adele and Rich Paul, and then MGK and Megan Fox. When Fox and MGK were shown on the screen the MC called them “MGK and his wife, Megan Fox.” Once the camera left them she looked at MGK and said, “I’m not your wife…”.

Never mind the fact that they are engaged, that MC just absolutely screwed Kells. Any guy who has been with a chick a long time or engaged for longer than 3 hours knows that she will take any and every opportunity to rub it in your face that you haven’t crossed the finish line yet. Waiter refers to her as your wife, dinner ruined. Grandma asks if you two have set a date yet, the ride home is going to be miserable. MGK is just hanging out, enjoying the spotlight being on his hometown, and he gets straight blindsided with that shit. I’ve been with my fiancé almost a decade so I feel for the guy.

The intros for the All-Star game are a huge production, the best of which gets saved for the starters. But that didn’t stop All-Star reserve and resident Cleveland fashionista Jarrett Allen from wanting to join in the fun.

I absolutely love this move. Obviously I’m biased as a Cavs fan but this is one of the coolest moments of the weekend. We always see guys acting super cool and trying to radiate an aura of “been there before” but Allen said fuck all that, I want to ride the damn platform.

You can see him imaging himself being announced and the crowd going nuts. We’ve all done this in one form or fashion. Hitting the buzzer beater in your driveway as a kid and pretending the crowd is going bananas. Super cool to see a guy on a $100 Million deal still dreaming like the rest of us.

Also, huge shoutout to James Harden for once again faking an injury to quit on a team. The second time he did it the Cavs received Allen in a trade and this third time it got Allen named an All-Star. I respect Harden for the move because it actually helped my team win, something literally none of his former teammates can say.

And finally we have to talk about Bill Murray. I’m not going to even bring up the fact that he and Lil Wayne looked like they're filming a retirement home reboot of Kid N Play. 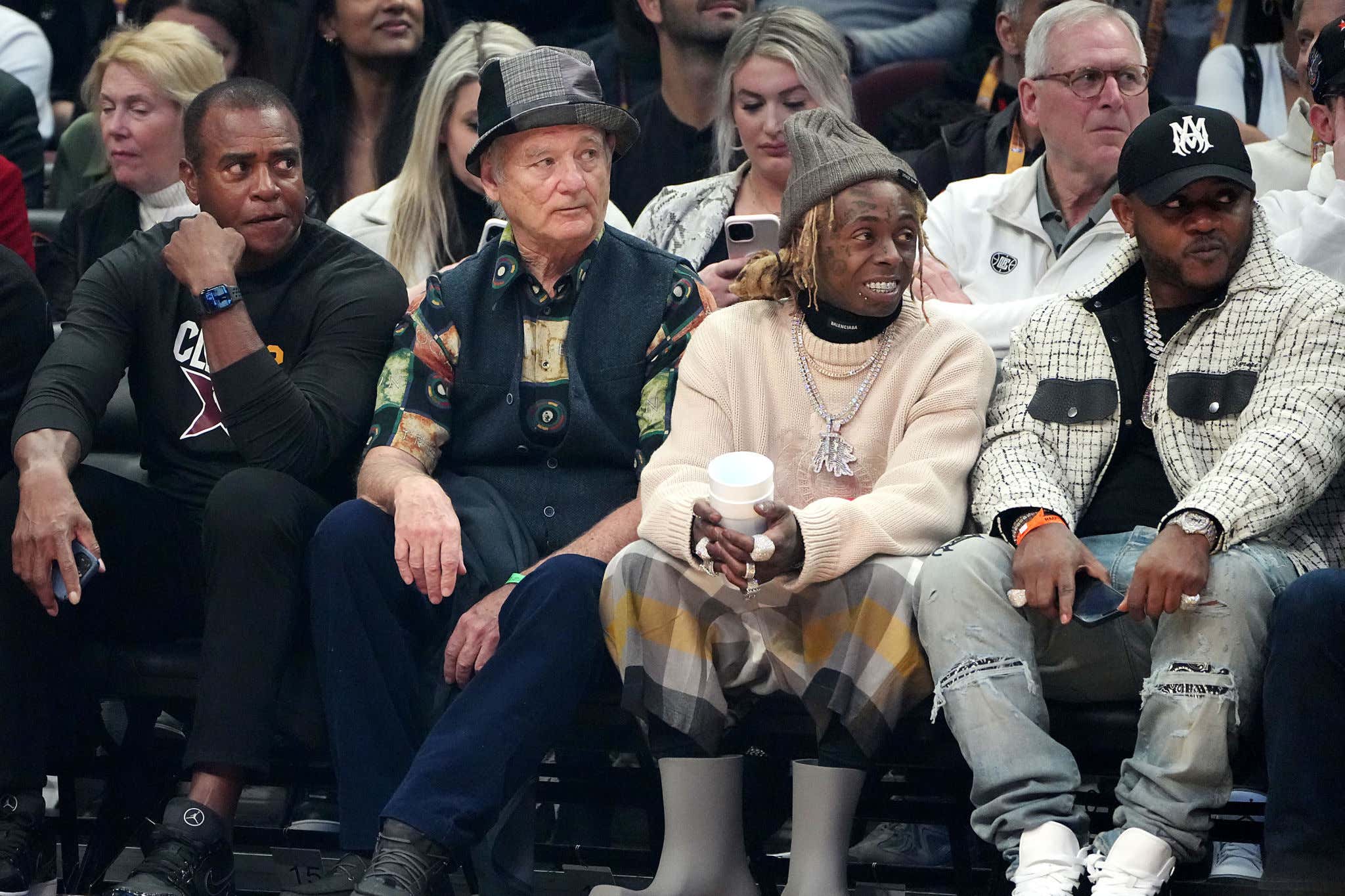 Mr. Murray is an American icon and can dress however the hell he pleases. The guy was having a blast and everyone who was working near the court said that Bill was never more absolutely giddy than when the Pogoliers were performing. The Pogoliers are the Cavs pogo stick entertainment team, which are decently entertaining, but usually just something that happens while you take a piss and grab another $15 beer from the concession stand.

They performed twice over the weekend and both times Bill was like a teenager seeing his first set of boobs. He was in absolute awe and realized that he now knew what he must seek out for the rest of his time on planet Earth. Which I won’t make a joke about because I don’t want to taunt the Grim Reaper and be the reason we lose an absolute gem.

Anyway, Cleveland showed out this weekend and it was awesome to see our city as a playground for some of the biggest names in sports and entertainment. Next time any of you try and make a stupid fucking river on fire joke I’m just going to tell you to suck it like that assistant coach from Wisconsin.