Unbelievably huge win for your 1st place* Fighting Illini today in East Lansing. Just about anyone who has ever played in the Big Ten will say MSU is the hardest place to play, no less on a Saturday morning. And on the front, Illinois completely sucked the air out of the gym for the first 37 minutes of the game. Then the refs got to work for Tom Izzo and brought them back in for the final minutes but that's neither here nor there. Illinois holds on. 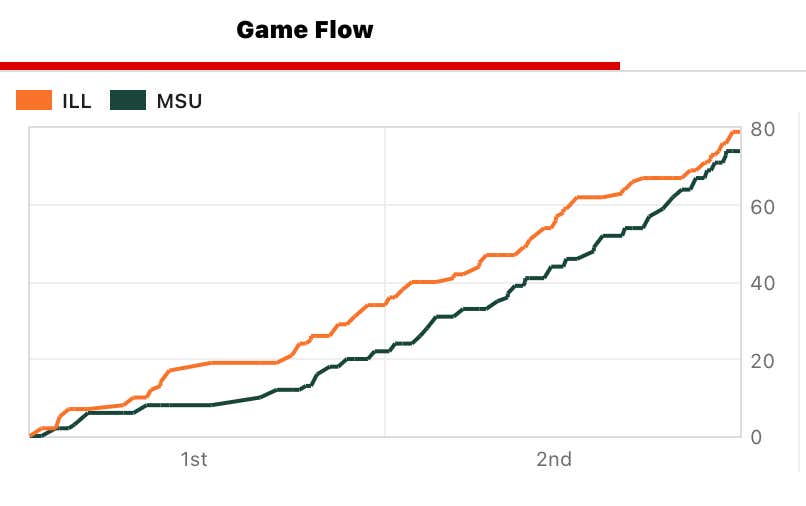 Whatever. A win is a win is a win and there was unbelievable work done today by Kofi and Grandison. 18-27 for 51 points (9-11 from FT line) and 14 boards. Pretty hard to lose with these levels of production

And with that, the Illini remain in 1st place *(tied with Purdue) 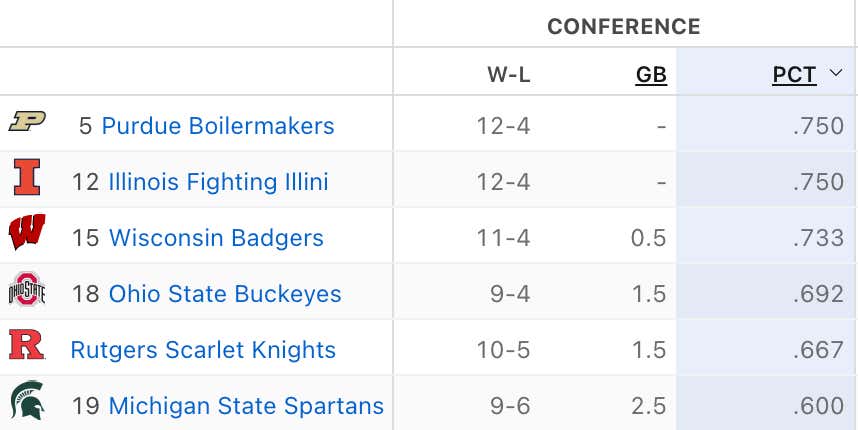 It's crazy that people still talk shit about Illinois and Brad Underwood and try to discredit this program. Lately it's been the Purdue-Northwestern-Rutgers three game stretch that has everyone freaking out. Even though the players are legit and coach knows his stuff and we're in control of our destiny, people still want to doubt and discredit. It's crazy to me. All Brad Underwood does is develop his team and get better throughout the season. How else can you explain the following graphic:

Illinois and Houston are in a class of their own. Meanwhile Gonzaga's head coach hardly misses anything after recklessly endangering his community. It doesn't make any sense and frankly I don't care any more. I welcome the adversity much as I know Brad Underwood welcomes it. That's how you get stronger and propel yourself into March. I can feel it deep inside my loins.

Question is how much shit are you wiling to talk between now and then? My recommendation would be none, but I understand if you can't help yourself. Illini fans are easy people to talk shit to because we represent a little bit of everything. Solid campus. Smart kids. Big ten sports. Close to Chicago. Crazy party scene. Academic prestige. Affordable tuition. It checks so many boxes that outsiders are prone to hate and that's great. Remind me of Loyola last year while overlooking Ayo's pro career. Trash whoever whenever whatever. I'll be over here standing behind Coach Underwood ready to follow his instructions into battle. And quite frankly I wouldn't have it any other way.

4 games left. Not exactly murderer's row but that doesn't really matter this time of year. Great thing is they control their path to a Big Ten title. 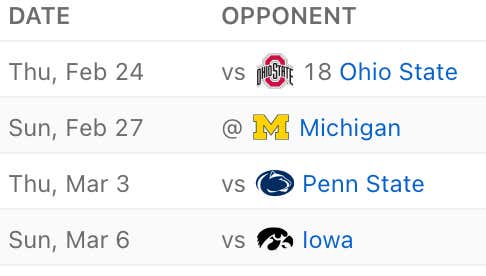