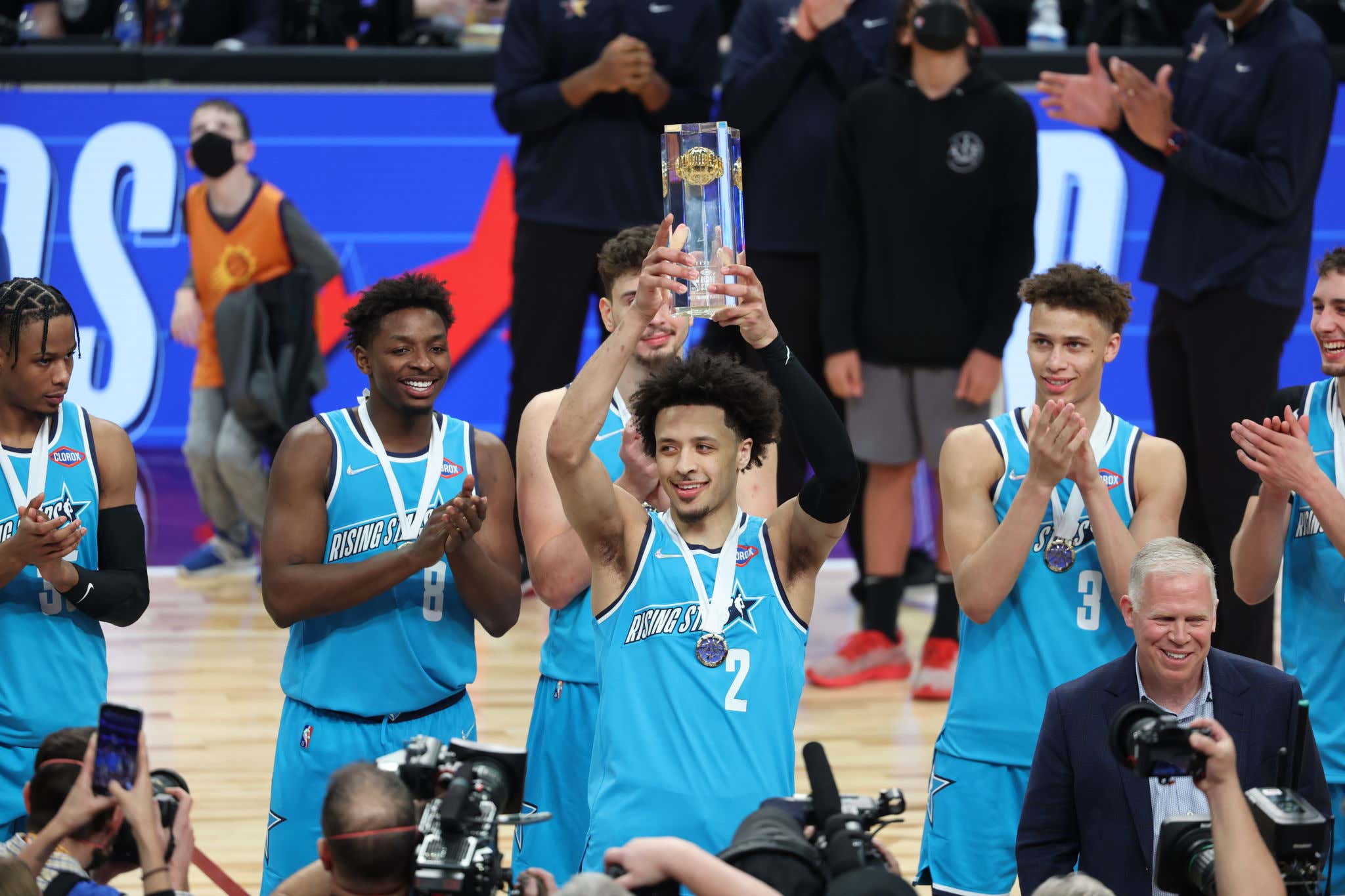 Back at the end of January when Adam Silver announced the new format for the Rising Stars game, I was intrigued. We had seen something similar with the Elam Ending making its way into the big main event, and that was awesome

Personally, I am all for getting nuts during All Stat Weekend when it comes to this stuff. Try anything and everything under the sun and see what sticks. It's about entertainment at the end of the day and anything that will force players to actually try during the festivities is always something I will get behind. So when it came to last night's events, I was interested to see how this would all play out

When it came to the games, they get two thumbs up from me. Love the tournament idea. We know the league and Adam Silver want to find a way to put this into the actual NBA season, and at times last night while watching these games I found myself opening up to that radical idea. I'm sure there are a billion details to iron out, but these games had a pretty cool AAU feel. Or a JCC boys travel team feel for those fellow white chosens out there that might be reading this. You know what I mean. At some point in your life, if you played basketball I'm sure you've played in some sort of tournament format. It's fun as hell. I found myself wondering what this would be like to get in the middle of the NBA season or something. Or what if the lottery order was determined by a tournament like this? Where the bad teams had to actually try and win in order to secure the top pick. Things of that nature.

In terms of the actual basketball we saw, there were times where it was your usual All Star stuff. Guys going half speed, launching threes, trying cool dunks etc. But these games were also pretty competitive

In terms of a watchable product, I would say all of those games were great. The young talent in this league is getting legitimately insane and this doesn't even include some of the other exciting young players we have. I think that's what made the basketball so enjoyable to watch was because the level of basketball being played was pretty high. Especially when the scores got close to 50. For the most part, I had no complaints. There's just one thing they need to figure out, and the same is true with the Elam Ending in the All Star Game

Find a way to make it impossible to win a game at the FT line. I know that doesn't make sense. Win by 2 doesn't always work so that's out. What if they just made a rule for this format that when a team is within 3 points, all fouls are side out if the FTs would win the game. Boom. I just did the hard part for you Adam Silver. We are making shit up with arbitrary scores that lead to wins, so why not make another fake rule. Is anyone going to complain? No! We want to see game winners via jumpers/dunks/plays and not FTs. This is a fake game during a fake weekend, I feel like that's a pretty easy no brainer. If you are at 48 or 49, any time you are fouled its side out. If you have 47 and get fouled taking a three, side out. If you have 47 and get fouled taking a two, you go to the line.

Is this a terrible idea? I'm not ruling that out, but in my head it makes sense. Just don't allow these games and awesome endings to come down to FTs. That takes so much air out of the sails after watching a really good game. How much better was Jae'Sean Tate's game winner than Desmond Bane's or Franz Wagner's FTs? That's what I want more of and my plan gets it.

I'm not sure if the NBA is going to continue this historic shot challenge in future years or if this was just because of the 75 Year Anniversary, but if this event is going to exist as the "halftime show" of this tournament, I have some changes

In this event, each one of these shot locations was supposed to represent a historic NBA shot. The Magic skyhook, Ray Allen three, Barkley pull up, Reggie Miller pushoff three, Dame's logo shot vs Paul George etc. A cool idea to celebrate some of the biggest shots in NBA history. Here's the problem. The players didn't have to take the shot in the same fashion that it happened in real life. I call bullshit. That defeats the whole point. Magic didn't take a 4ft floater in that moment. He took a running skyhook that ripped the hearts out of an entire city. You should have to take a running skyhook from that spot. Ray's corner three. You should have to sprint from the paint to the corner and immediately catch and shoot. None of this going to the corner, looking down and getting your feet set and then launching. That's not what happened. Reggie's spot. You should have to be running from left to right into your three. Not a spot up. Same with Dame's. That should have to be a stepback. If the idea is these are supposed to honor those shots, you should take them as they happened. I'm not sure how that got overlooked.

If we do see this again next year, with either the same or different historic shots, I hope they make this adjustment. Let's say they choose MJ's right to left layup. A pretty historic shot I think you'll agree. You should have to go right to left to get credit for that spot, not just finish at the rim however you want.

I am also not above removing this event completely and instead having some sort of 3 on 3 game during this "halftime" of the tournament. The Big 3 proved that can be a fun watch. I say try that and see what happens, chances are people will like it.

Big picture though, I think given the general response to this new format was pretty positive, the idea of having a real tournament incorporated into the actual regular season gets more and more real. I dunno how that would work but we know Silver wants it, we know there's probably a shit ton of TV money and sponsor money to be had, and if the general public seems down, it's only a matter of time.