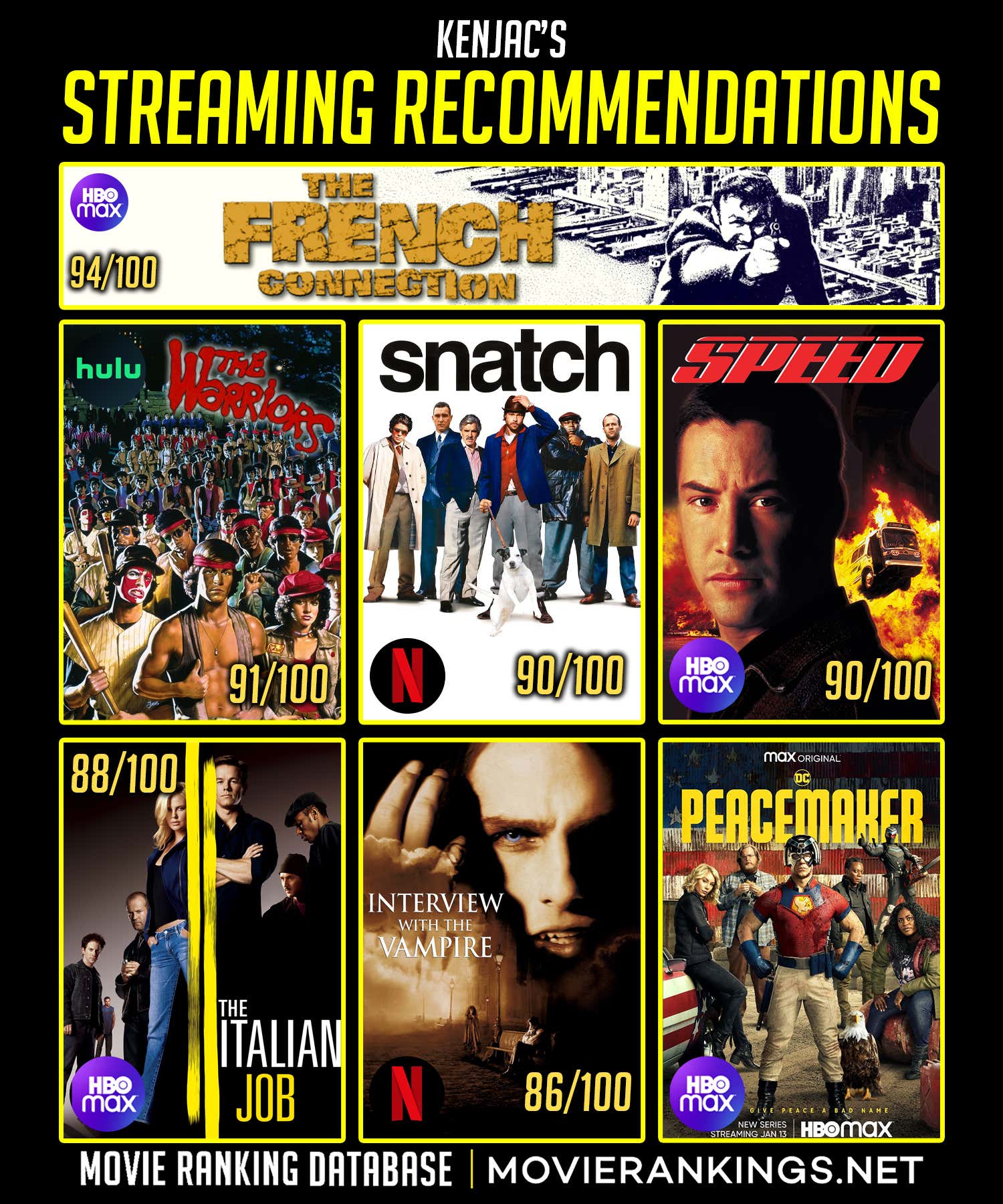 Influencers looking to breathe new life into a Texas ghost town encounter Leatherface, the legendary killer who wears a mask of human skin.

Support friend of the company HardFactorPat by enjoying the latest installment in the long-running franchise.

One of my all time favorite crime-comedy movies and it comes from the KING of crime-comedy, Guy Ritchie. It's about as must-watch as any movie you will find on this list.

A vampire relates his epic life story of love, betrayal, loneliness, and dark hunger to an over-curious reporter.

Another Brad Pitt banger, I love this one. If for no reason other than Tom Cruise is so god damn fantastic at playing a villain.

College student Evan Treborn (Ashton Kutcher) is afflicted with headaches so painful that he frequently blacks out. While unconscious, Evan is able to travel back in time to difficult moments in his childhood. He can also alter the past for friends, like Kayleigh (Amy Smart), who was molested by her father (Eric Stoltz). But changing the past can drastically alter the present, and Evan finds himself in nightmarish alternate realities, including one where he's locked away in prison.

I remember watching this in middle school and thinking it was the best movie I had ever seen. I've definitely soured on it as time has gone on, but I still like it.

Los Angeles SWAT cop Jack Traven is up against bomb expert Howard Payne, who's after major ransom money. First it's a rigged elevator in a very tall building. Then it's a rigged bus--if it slows, it will blow, bad enough any day, but a nightmare in LA traffic. And that's still not the end.

More than anything else, I have always loved how exceptional the late Dennis Hopper was as the villain in this movie. It's an action classic that is always considered one of the best of the 90s.

Charlie Croker pulled off the crime of a lifetime. The one thing that he didn't plan on was being double-crossed. Along with a drop-dead gorgeous safecracker, Croker and his team take off to re-steal the loot and end up in a pulse-pounding, pedal-to-the-metal chase that careens up, down, above and below the streets of Los Angeles.

Perfect cast, perfect heist and perfect dialogue. I'm not sure what more you could want out of a heist movie. Mini Coopers, maybe? Well, they got them too.

Tough narcotics detective 'Popeye' Doyle is in hot pursuit of a suave French drug dealer who may be the key to a huge heroin-smuggling operation.

One of my favorite older crime movies and one of Gene Hackman's best roles. It's also a movie that I think 99% of your dads swear by.

Prominent gang leader Cyrus calls a meeting of New York's gangs to set aside their turf wars and take over the city. At the meeting, a rival leader kills Cyrus, but a Coney Island gang called the Warriors is wrongly blamed for Cyrus' death. Before you know it, the cops and every gangbanger in town is hot on the Warriors' trail.

Speaking of great older movies, this has got to be up there. An awesome, ahead-of-its-time story,  with one of the all-time lines in movie history.

While grieving for the loss of their mother, the Connolly sisters suddenly find they have a crime to cover up, leading them deep into the underbelly of their salty Maine fishing village.

Kung Fu movies aren't for everyone, but this is one of the great entries into the Bruce Lee catalogue.

In 1952, Hollywood power couple Lucille Ball and Desi Arnaz face personal and professional obstacles that threaten their careers, their relationship, and their hit television show.

As someone who wasn't totally read up on the show or Lucille Ball, this was a fascinating watch. I feel like I learned a lot but also just enjoyed the actual drama. Sorkin is an exceptional writer, especially when he is outside of the political realm.

1. Peacemaker - HBO Max: Most of you already started this series and know that it is THE series to watch right now. Great action, amazing humor and killer music. They just wrapped up their finale in perfect fashion and it is the best series of 2022 so far. 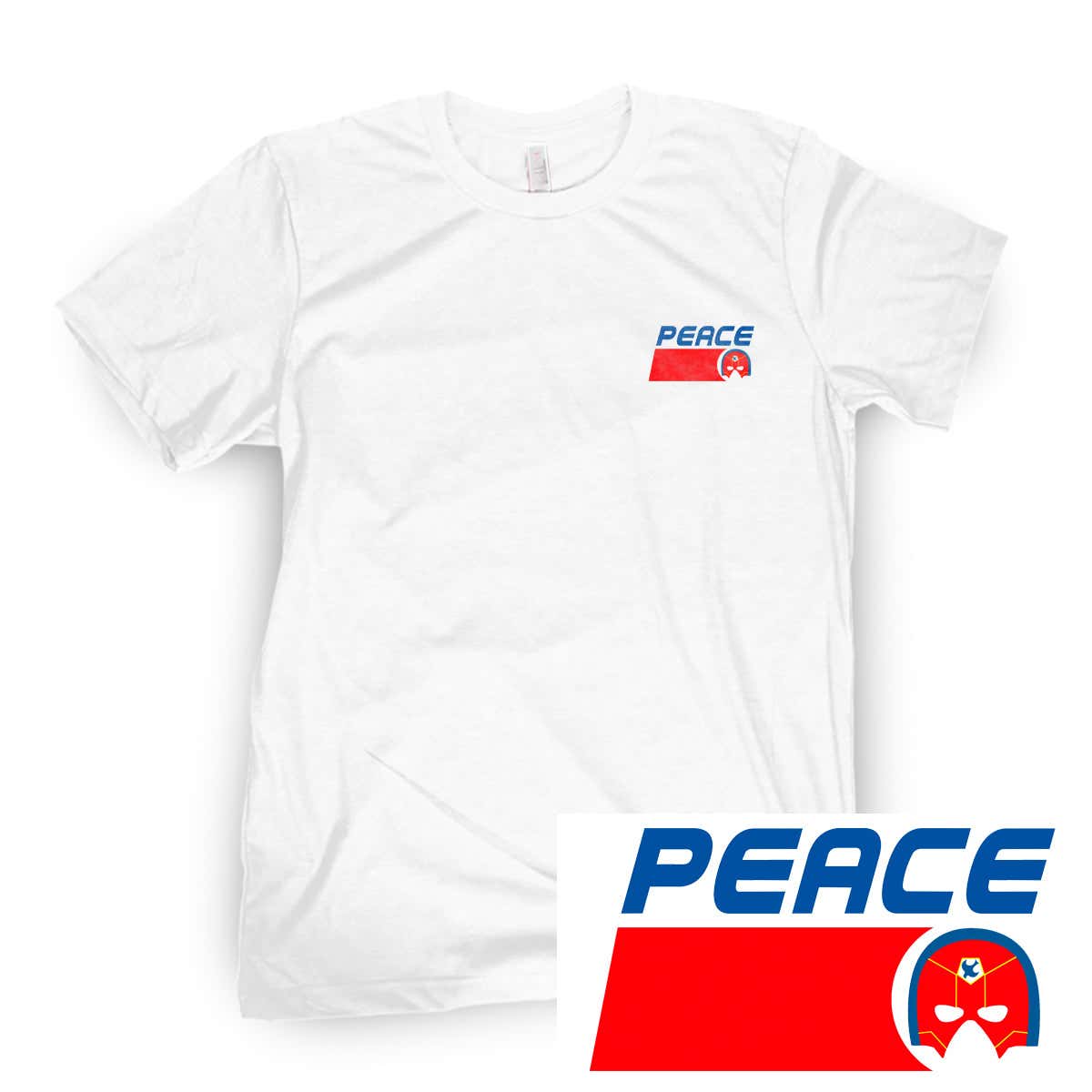 2. Peaky Blinders - Hulu+: The 6ths season is going to air on BBC later this month, which means it should hopefully be on Netflix in the near future. Why not recap one of the best crime series of the past few years?

3. The Last Kingdom - Netflix: Like with Peaky this is returning soon. March 9th to be exact. This Viking show is a little bonkers but I really do fucking love it. Every episode feels like a full season in the best way, and I love the drama and battle scenes.