That's a quality skirmish. Not right at the kerfuffle or donnybrook level, but a skirmish nonetheless. When you have players getting held back, some pointing and the A+ shoving match? That's a skirmish. If a soft punch lands we're in kerfuffle territory. If multiple players go down then it's finally a donnybrook. But welcome to mid-major basketball life. This is all fine and dandy. Teams should be pissed if you're fouling down 16 points with under a minute to go. I lose my mind watching this beautiful sport because of how many fouls happen late when the game is over. Don't foul down 8 with 20 seconds to go. It's not going to happen.

I'll say this. If this man is running at me full steam, I'm going to turn and sprint as fast as possible. That or lay down and hope to trip him. This man saw red. 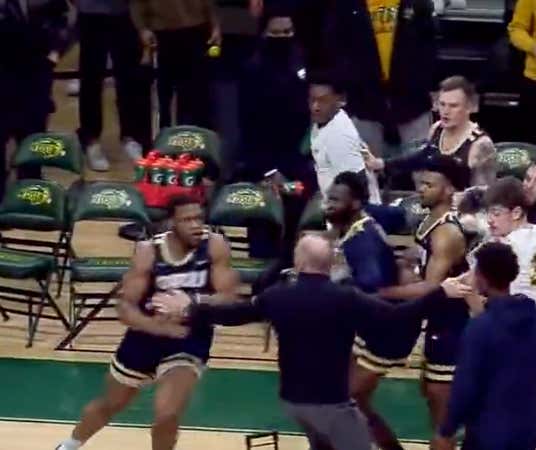 Speaking of this game, I really wish Max Abmas when somewhere else. I know, I know. It was awesome what he did last year. But he had Kevin Obanor. Kevin Obanor is now at Texas Tech. Max should have went somewhere we wouldn't forget about him. Go somewhere we could watch him all year and get him in March. Probably should have just went to Texas Tech to be honest.